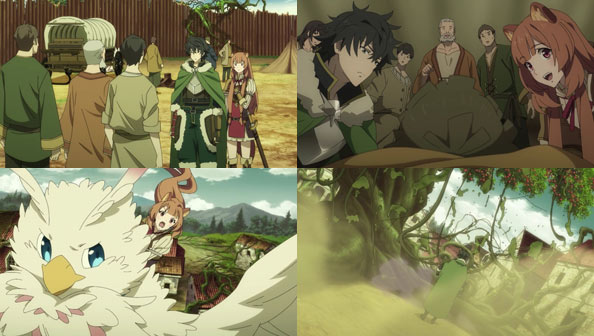 When Naofumi’s trader friend sends him to a village in dire need of a huge order of herbicide, he, Raphtalia and Filo soon find out why: What started as a “miracle seed”, ironically provided by the Spear Hero Motoyasu to end a famine, grew into a scourge of a vine that not only overruns the village but infects its children like a parasite and breeds plant monsters that mere adventurers can’t defeat.

Naofumi goes above and beyond his duty by not just delivering the herbicide, but healing the kids with his potion lore, and with Raph and Filo providing the offense while he provides defense and support, defeats the central plant monster, leading to the destruction of the network. It honestly isn’t that difficult a quest, now that Naofumi and his two wards are so powerful.

Having cleaned out the village elders’ entire supply of cash, he agrees to take the rest of his payment in trade; specifically, the fruits he himself developed by altering the seeds so they won’t cause anymore trouble, just bear profitable fruit. With that, Naofumi returns to the trader with the merchandise, and he in turn offers another delivery job, this time to a hot springs village.

Here, the rivalry between Raphtalia and Filo for Naofumi’s attention kicks into the next gear, with Raph learning the romantic qualities of the bath she’s in only to learn Filo is already sharing her bath with Naofumi, or when she brings milk to share with Naofumi only to find him combing Filo’s hair. Raphtalia considers Filo an interloper: she was there first, and Naofumi is hers. 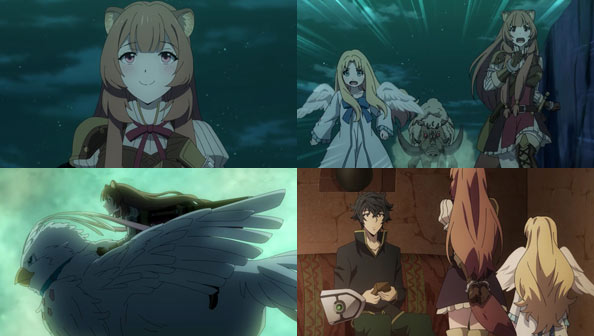 She tries once again to win Naofumi over once and for all by going off on her own to find a crystal called latium (an ingredient in love potions) that can be obtained from the nest of a certain native bird, only to find Filo is on a similar quest to make Naofumi her “mate”…and collect some eggs for eating. But when Filo almost falls off a cliff, Raph catches her, and when the giant silverback they landed on chases them, Filo transforms and has Raph jump on so she can jump to safety.

The trip to the birdsnest is short and unproductive, again due to the silverback, but Raph and Filo decide not to let the boar boss them around anymore. They work together to slay it, trade it in to some villagers for cash, and use it to purchase an expensive metalcrafting hammer for Naofumi, as a token of their mutual gratitude. Insofar as Naofumi can be touched by anything, he seems touched by the gesture.

Raph and Filo can be pretty irritating when competing, but thankfully far more fun to watch when collaborating. As for Naofumi, he’ll probably never see either of them as anything other than kids…and if you think kissing will get you pregnant, you kinda are a kid.