I’m still thinking about Episode 8, so I knew it would be hard to top it…for anything to top it anytime soon. Episode 9 doesn’t come close…but it does begin with the three Nyamazon cats shooting the shit like three wise old farts under a kotatsu. It’s just the latest reminder that predicting what Sonny Boy will throw at you from one week to the next is like trying to predict every move in a chess game when you’re not in the same room.

The cats, famous lovers of warmth, are under the kotatsu because outside the kotatsu is a frozen, snowy world. Nozomi, Nagara, Yamabiko, and their human Mizuho have traveled there to try to settle a thousands-of-years-old battle between two twins over who has the most hairs on their head (one claims to have one more). But it’s also a look back at Mizuho, and how the white cat Sakura believes she can’t survive without the three of them. 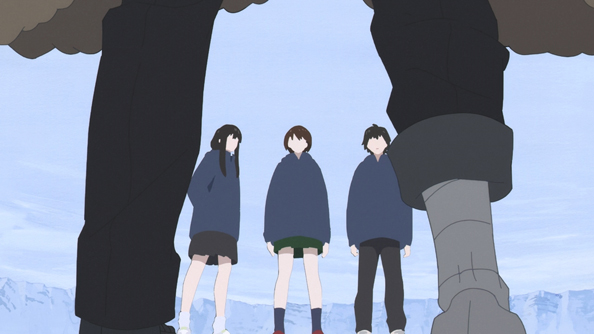 Honestly, the twin story is a bit dull, but it at least ties into the concept of duplication, which we learn is to be Mizuho’s true power. Everything the cats deliver to Mizuho and the others is a copy of products from the original world they came from. While Mizuho’s inner circle certainly wouldn’t hold it against her, the cats, who have been with Mizuho since she was a kid and still believe her to be one, are determined to keep it under wraps. 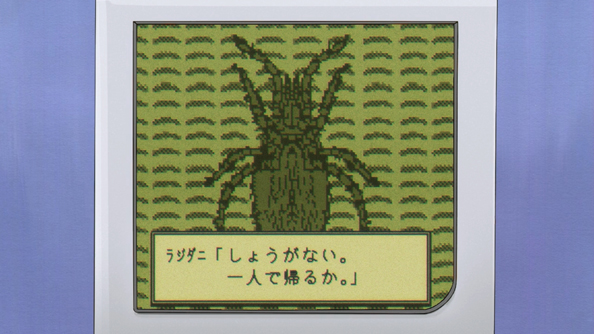 It’s Yamabiko who approaches Sakura with his suspicion that everything the cats deliver is copies. Sakura then admits that Rajdhani had previously figured out that Mizuho had copied everyone from the world, and now they’re drifting as copies of the people they once were, both the same and different, like the twins. Mind you, this dawned on Rajdhani when two copies of a tick dating Game Boy game(!) arrived, even though he knows there was only ever one in existence.

Yet Rajdhani didn’t tell a soul, proving to the cats he had “a fine character, for being so hairless”. Two copies were made of Sou Seiji, like someone accidentally ordering two of something on Amazon by clicking twice.

Sakura is caught in a bear trap to be a sacrifice of one of the twins, but Mizuho and Yamabiko save her. When armed with a gold ray gun by the shit-stirrer Aki-sensei, the other twin ends up with another ray gun, resulting in a duel that ends with only one twin standing, only for that surviving twin to take his own life. 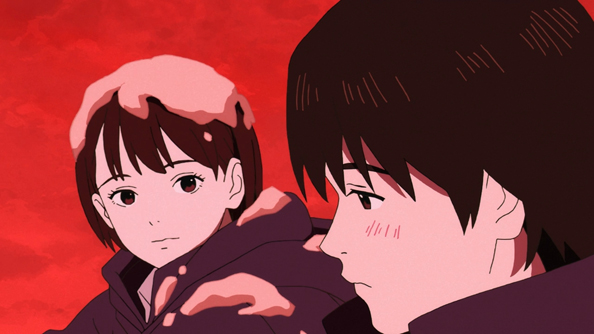 Mixed in with this is how Asakaze seems to be making a habit of lashing out at Nozomi for not liking him romantically, leading to her spending the night outside sulking. One of the cats keeps her company all night, and in the blood red morning Nagara joins them, thanking her for “showing him the light”, leading him to change.

In a world full of copies and sheep, Nozomi, Nagara, Mizuho and Yamabiko (not to mention Rajdhani) stand out as one-of-a-kind souls who all thank the likes of Aki-sensei or Asakaze to let them pick their own places.

This week is spent “up in the clouds” and barely involves Kino at all—she and Hermes only bookend the episode. In their stead, we get a lovely, beautiful, and heartwrenching semi-allegorical tale up in the mountains involving a new character, an orphan girl (voiced by Minase Inori, who is everywhere), sold into servitude, constantly treated like crap by her merchant owners, adult and child alike.

The episode wastes no time portraying those owners as a complete waste of life; they never let off the gas pedal of abuse, both verbal and physical, and the girl just…takes it all. They ask if she hates them, and she says she doesn’t. She doesn’t hate, resent, or wish harm on anyone; to do so would be a sin. They mock her piety, believing only humans who act inhuman survive in this ugly world.

Of course, part of the title of this show is The Beautiful World, with the understanding that the world is beautiful because it isn’t…but the mountaintop environs are ironically utterly gorgeous. If only the girl had better company. 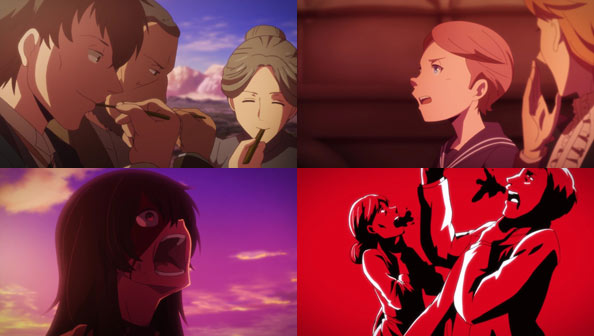 She realizes too late that the herbs she picked and added to the soup for dinner were poisonous, and all attempts to warn her owners fall on deaf ears. She steels herself to drink the soup and die with them rather than live as a murderer (however unintentional), but a boy seals his fate by knocking her bowl out of her hands; she’s later hit with a rock and knocked out.

When she wakes up, the merchants are still alive, and the boy has convinced his father to sell him the girl so he can take his time killing her in order to “become a man”, which is what we’d call overkill. What the hell is this kid, the Devil’s Spawn? In any case, the poison kicks in and they all die before the girl’s eyes. 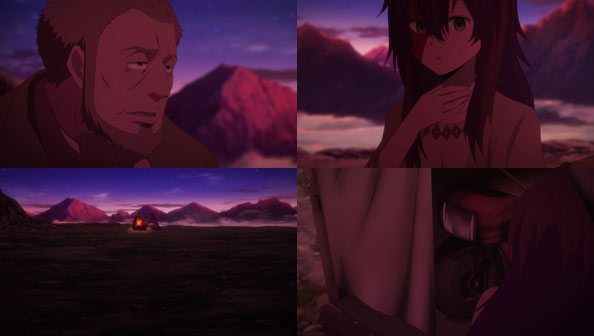 The only survivor is the man who told his younger colleague, essentially, that the girl being a slave while they’re free comes down to luck; “there but for the grace of God go I” kinda deal.

He believes that until his death, which is semi-self-inflicted, as he pretends to instruct the girl on how to use his rifle to kill herself, but fixes it so she shoots him instead. Before he dies, he unchains her, and with his last breath, tells her to live her life; she’ll understand someday why things happened this way.

To the girl’s shock, there’s a voice coming from one of the wagons. It’s a talking motorrad (in the form of an adorable Honda Motocompo) who has been listening to everything going on, and congratulates the girl on her freedom.

The girl still wants to die, but in the same vein as the last man to die, the motorrad tells her the only way to die is to live life. No one knows how or when death will come, but it comes for everyone. The circumstances that led to the girl’s current position shouldn’t be considered grounds for immediate death. Indeed, it was clearly her fate to survive, escape the shackles of bondage, and strike out on her own. Why else would she meet a talking motorrad immediately after her last captor died?

We see Kino and Hermes arriving at the camp where the bodies of the merchants remain; not much time has passed since the girl and the motorrad left. But as the credits roll we learn what became of her: she was accepted as an immigrant in a new country after telling them her story, took up photography, and became successful and esteemed.

She took on the name Photo, and kept her first friend, the motorrad whose name is Sou, close by the whole time. Sou believes she’s happy. She certainly looks content. I wonder if she’ll ever meet Kino…

As Ayaka lies in the hospital in a coma, Narumi asks Alice for help investigating her attempted suicide. Alice officially names him her full-fledged Assistant. They soon learn that Hakamizaka, a brilliant young student specializing in plant genetics, is the one behind the recent Angel Fix distribution. Through Toshi, he made Ayaka unwittingly plant flowers in the gardening club’s greenhouse to be used in the producition of the narcotic. Naurmi still doesn’t believe Ayaka tried to off herself after finding out what she’d been doing, but only Toshi and Hakamizaka have the answers. Meanwhile, Sou and his yakuza are scouring the city for the scientist, irrespective of sentimental considerations: their goal is merely to clean up the city.

I liked this episode, where for once Narumi is fighting for a very personal cause – discovering the truth about someone he cared about far more than he initially realized. I’m unsure whether it was anything other than a formality, but Narumi is now Alice’s full assistant. Now that they share a common trauma – Ayaka’s attempted suicide, perhaps she feel it would be best if they collaborated as closely as possible for the best results. Seeing with her eyes and speaking with her voice, he directs the other NEETs to find the information he needs. I had assumed Ayaka was dead dead, but here she’s just in a coma. Thus, the chances of her waking up, while announced as slim, are not nil.

Poor Ayaka. For someone as kind and pure as her to come to the realization she’s been helping to create drugs that kill people must have been devastating enough – but that her own beloved brother was putting her up to it must’ve been worse. She didn’t feel she could tell Narumi any of this. As for the exact reason she jumped, perhaps she was goaded into it – or even pushed – by the likes of Hikamizaka. The guy is your classic mad scientist evil genius with pretensions of grandeur and a thuggish side. But now that he’s a wanted man, he’s even more dangerous, as is Toshi, who seems to be hopelessly addicted to Angel Fix. As for Ayaka herself being drugged…well, you’d think the doctors would have checked her bloodwork by now.

With Sou in the hospital, Narumi inherits the captain’s chair of the Hirasaka group. With this new power, he does what he’s done all along: con others for a good cause. Narumi has no business running a gang, but he does so anyway, by the seat of his pants. He even tells them that the fact they got Renji’s location right after Sou was injured spelled a trap. This wasn’t any proven theory; it was a hunch, plain and simple. But is was true; there would have been a nasty battle had he let them go. As Alice notes, this Narumi is truly a mysterious cat.

He has the Feketerigo concert proceed as scheduled, keeping in contact with both the NEET crew and his minions. Renji’s crew blends in with the crowd. Meanwhile, Narumi has set a trap of his own for Renji, who takes the bait as expected. This sets up a confrontation between Renji and Alice/Narumi, wherein Alice drops a bomb on him: Hison is still alive. His treasured shirt that Hison made was embroidered in the same way as Narumi’s Feketerigo shirt – and by the same person: Hison, or as she’s now known, Yoshiki. As a condition of being allowed to live (and being paid off), she had to give up her womanhood. Harsh.

Sou shows up to exchange a few punches with Renji, but ultimately Renji’s rage and thirst for revenge dissolves once he learns the truth. The concert is a success, Renji ships off for Osaka, and with the Fourth still alive and kicking, Narumi returns to Alice’s side. Alice, for her part, is overplaying her hand vis-a-vis not liking having him around. For somebody as logical and empirical as she is, it’s a bit silly for her to constantly deny what’s plain to a dimwit. Good tea. Nice arc.