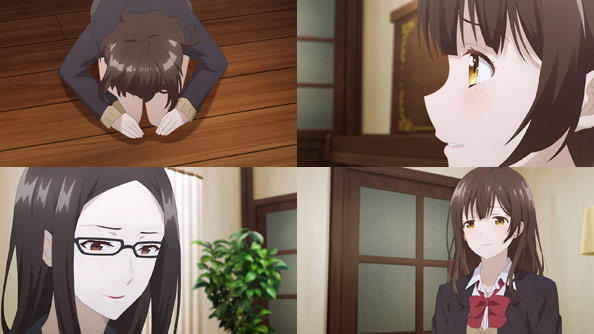 With Yoshida having said his piece and even kinda-sorta getting through to Sayu’s awful mom, it’s Sayu’s turn to talk to her. She takes a page out of Yoshida’s playbook by prostrating herself, and once again, her mom almost loses it over not wanting to apologize for anything. But she does at least finally understand that he’s the only parent Sayu has, and it really helps Sayu to hear that from her. 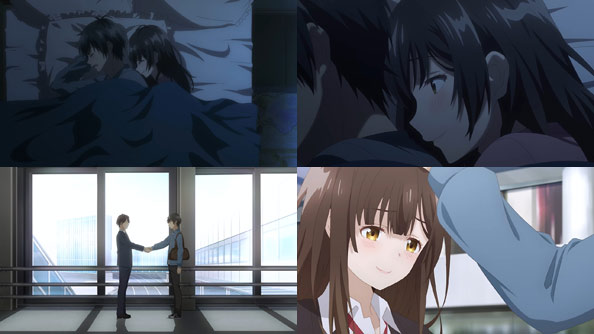 Having taken the first step towards détente with her mom, Sayu slips into Yoshida’s bed one more time in the night, asking if he wants to do it just once so they won’t forget each other. As always, Yoshida’s answer is the same; “no”, and “knock it off!” At the airport, after receiving thanks and refusing cash from her brother, Sayu confesses her love to him, and vows to visit him again when she’s an adult. This isn’t goodbye.

That said, when it finally hits Yoshida that Sayu is gone and with her the entirety of the cozy found family they built together, he can’t help but tear up. Even if he followed her easy recipe, his miso soup just can’t measure up to her’s. That said, as time passes, Yoshida settles back into a life without Sayu, which still contains Mishima and Gotou, who continue to battle for his heart at work.

It seems neither has a shot, as Yoshida has become close to Asami, who is apparently now an adult and no longer has a tan or bleached hair. He’s ready to meet her at the stargazing spot when he arrives home to behold a familiar sight: a young woman sitting by his entrance. It’s Sayu, now a high school graduate and evidently an adult.

The two go through the same exchange as when they first met. It looks like whatever Yoshida’s got going on with Asami (if anything), Sayu didn’t waste any time getting back to the guy she fell for—the man she’s glad she ran away and met.

This is all fine—really, it’s fine—but I’ll admit to suffering a bit of Higehiro fatigue. Considering how these last three episodes languished, a thirteenth episode felt like one too many.

So now we know the school administrators (if there even are any) are so cheap, the leave the roof repairs to Tenchi. Tenchi does his best, but he’s no roofer. Meanwhile, down below his home harem prepares a barbecue to cheer him up.

Normally no non-students are allowed on dorm grounds under any circumstances, but Sasami’s over-the-shoulder smile is enough to melt Touri’s heart, and allows the incursion.

It’s not just a barbecue for Tenchi, but for everyone (presumably there are no vegetarians among the main cast), even the science club, who happens upon the party. Yuki tries to graciously retreat, not wanting to start another fight but Momo invites them to join them; the more the merrier. Not to mention Aoi can’t resist the smell of the meat, nor can Beni pass up the opportunity to duel with Ryouko — with meat (and without collateral damage) this time.

It’s another gesture that speaks to Momo’s inherent decency, diplomatic skills, and desire not to be alone like she once was in the past. She never wanted war with the science club. It’s a lightweight but feel-good episode, and as is usually the case, the grilling meat made my mouth water.

The Sports Festival “Super Playoff” becomes an interminable, all-night marathon of totally non-sporting events such as trivia, whack-a-mole, eating, and chess. But what matters is that both the Red and White Teams agreed on something: that they should keep fighting for victory.

In the process, neither side really achieves victory, but they do achieve a kind of détente, which is what Momo wanted all along. The festival thus a success, the President nods off on Tenchi’s shoulder and her head gradually slips into his lap…drawing the ire of Ryouko, who retaliates…against Tenchi.

Some time in the wee hours of the morning, as Sasami patches him up she brings up how Tenchi will be overseeing the dorms soon, though she was told to relay the warning that any member of the opposite sex caught there will be beaten severely. It’s quite the Catch-22 for the already-bruised Tenchi…but it’s also par for the course.