Things have gotten so blissfully domestic in the scarred remains of Mistilteinn, Zero Two files her horns like one trims their nails, and Miku makes her a tiara of flowers that give her a more regal bearing. There’s a very Garden of Eden/Earthly Delights about their home, especially with Hiro Kokoro already having met their “serpents” in Zero Two and the pregnancy book, respectively.

Both have lent knowledge “Papa” (i.e. God”) did not directly give them, and has fundamentally changed their destinies, with Kokoro gaining the drive to procreate and Hiro growing horns of his own. Once Adam and Eve Know Too Much, anyone who’s read Genesis knows what happens next—expulsion from paradise. Papa’s agents arrive almost on queue to “check on” Squad 13 and see if any “corrections” are needed. 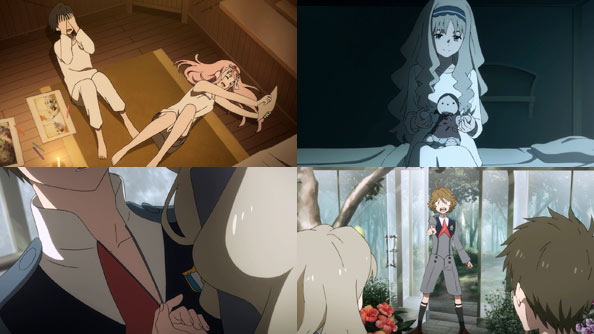 The Nines come dripping with the smug superiority you’d expect of such agents, looking down upon the less-than-ideal living conditions. None of them seem to touch the meager repast their hosts made and caught themselves—and no doubt can’t afford to waste. They look upon Squad 13 with pity, if not outright disgust, and their honeyed words and wry grins are fooling nobody (except Zorome, of course).

Meanwhile, during their latest meeting in the “birdcage” conservatory, Kokoro finally tries to come on to Mitsuru, having read the contents of the pregnancy booklet over and over, seeing the profound difference in their bodies, and thinking how right it feels to bring them together to make a life that will carry on after they’re gone.

Unfortunately, the night before while bumping into a Nine, Kokoro lost her booklet and it fell into Alpha’s hands. That’s when the wry grin vanishes. 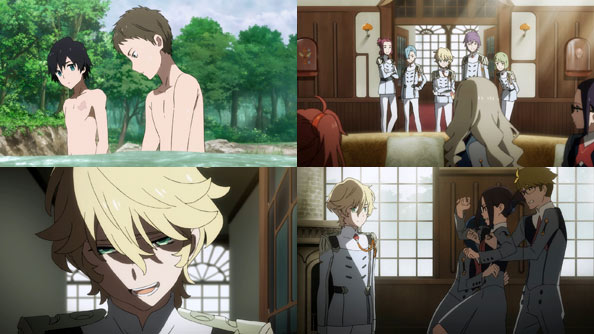 Mitsuru rebuffed Kokoro’s advancements, but more out of shock that she was acting on feelings he knew he had for her. It takes a bath with his old buddy Hiro to realize those are feelings of love, and he should do what his heart is telling him to do.

Before he has a chance to, the Nines confront Kokoro in front of the rest Squad 13 (who heard from Zorome that she and Mitsuru are an “item” now), and Alpha presents her baby booklet, full of straight-up taboo ideas that aren’t even supposed to be spoken of. Reproduction has been banned ever since humans “evolved past it.”

What’s interesting is how Alpha handles what could be a life-jeopardizing situation for Kokoro like a hall monitor finding contraband. He is merely an instrument of Papa speaking only with Papa’s voice. But his dispassionate tone becomes cruel when Kokoro makes her case for why humans are no different in other animals, and how there should be more to life than piloting FranXX into battle.

He calls her and her perfectly reasonable ideas utterly “disgusting”, and for that, Ikuno slaps him and has to be held back from doing more, not merely lashing out on Kokoro’s behalf, but due to her own unrequited love for Ichigo. 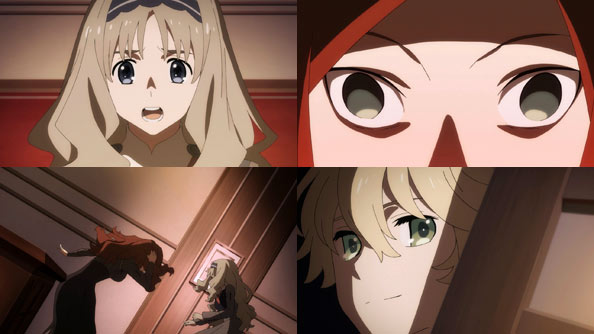 Hachi and Nana separate Kokoro from the others and reveals that they’ve been watching Squad 13 all along, as part of Dr. FranXX’s “final test” for them. When Nana insists that even talking about reproduction is banned, let alone doing ti, Kokoro rightfully asks why they have the organs to do so, and emotions that seem to compel them to do so.

These questions from Kokoro spark a sharp visceral reaction in Nana, leading both Hachi and Alpha to suspect that she’s “relapsed to puberty”, which is ominously referred to as “not being good” for the person to which it happens. Alpha even blithely suggests they replace her with a “new Nana,” as the current one has been rendered “useless.” Harsh shit.

Based on Dr. FranXX’s reaction to Squad 13’s developments (and absent further information) it seems his primary goal was to see how easing 13’s emotional and sexual suppression would improve their performance as weapons against the Klaxosaurs. After all, he never expected his experiments would lead 13 to develop “humanity’s original reproductive instincts.”

And yet, here we are. When two members of APE arrive at Klaxosaur Central (presumably in the Gran Crevasse), they meet the humanoid “Princess of the Klaxosaurs” and formally ask her to surrender to Humanity and end the now century-long war.

When she refuses, one of the APE members attacks her, and she slaughters him, his partner, and their three guards with ease. When she removes the mask of one of the corpses to find nothing there, she derides them as “human wannabes.”

That got the gears going in my head: what if, perhaps a century ago or more, aliens invaded earth and imposed the system they have now? What if the “humans” we’ve seen in the various plantations are the anamoly, and the Klaxosaurs are actually closer to what humans used to be?

We can’t say how far in the future this story takes place, so the fact Nana, Hachi, and the parasites we’ve watched could have tricked us into thinking they’re “real humans” with their familiar looks and ways of living. The Princess’ words throw everything into doubt…though one thing we learn from Zero Two is that she can’t reproduce like humans.

Earlier in the series I doubt anyone would have guessed that the first Squad 13 couple to jump into bed together would be Kokoro and Mitsuru, but here we are. I enjoyed the contrast between the candlelit chasteness of Zero Two and Hiro’s romance, and the more physical, primal, hot-and-heavy Kokoro+Mitsuru variety that finally crests with the two having sex.

It is an act of simple human biology, and yearning to decide one’s future with one’s own heart an act of simple human psychology. But in their artificial world, these are also acts of rebellion, as well as capital crimes for which there may well be dire consequences. After all, Dr. FranXX, Hachi, Nana, the Nines, and APE are all watching. The Garden of Eden may feel secluded, but nothing that goes on there is really private.

APE, however, have more pressing matters. The Princess has violently rebuffed their condescending “olive branch”, and so they vow the Klaxosaurs will “feel the pain of having their earth scorched by their own creation.” ‘Their?’ Scratch that about aliens: perhaps Klaxosaurs are highly-evolved humans who created the APE and their ilk; now they’re at war with them, with Zero Two, Hero, and Squad 13 stuck in the middle.

While we’re on the subject of creations coming to bite their creators in the ass, I’ll close with that iconic quote from Jurassic Park: