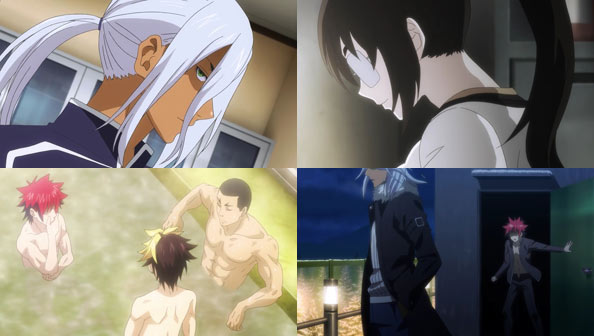 I may have been down on Akira for bending the knee to a tyrant like Azami, but I held out the possibility there was a good reason he was doing it other than self-advancement, and there is. Akira owes everything he is to his beloved Jun, and Azami threatened to make life extremely difficult for her if he didn’t cooperate, so he did.

That’s what Azami does: he finds your weak spot, but offers an out that suits his purposes before going in for the kill. Just because Akira is an amazing chef doesn’t change the fact that protecting Jun was more important than his culinary independence.

Thanks to Doujima, Souma and Kuga learn about Akira’s circumstances, but as far as Souma’s concerned, Akira still took the easy way out. Souma has no quarrel with Jun and indeed would lament contributing to her suffering in any way, but these are the cards he’s been dealt. His only choice to avoid expulsion is to defeat Akira, and that’s what he intends to do.

In the fairest and most impartial examination of this whole process thus far, Doujima introduces the judges: brain physiology genius sisters Cilla and Berta, along with Alice’s straight-shooting dad Suoe. There are no other Central machinations to make Souma’s job tougher; this is between him, Akira, and their cooking. May the best man win.

Everyone observing the two chefs immediately picks up on the fact that there’s a level of intensity they were not inspecting. Souma does not shrink before Akira’s objective superiority in spice, and both of them decide to take a great risk by frying the bear meat, which will either enhance the umami or amplify the smelliness.

The smell and tiniest taste of Hayama’s gravy is enough to “domesticate” the sisters, but Souma is the first to complete his dish, and after following Suoe’s lead, grabbing the hot cutlet with a napkin and digging in, Cilla and Berta are immediately relieved of their clothes. Souma took great risks, and walked the tightrope along with Akira, and it all paid off.

By grinding different cuts of the bear meat together, including meat close to the bone, Souma expertly crafted a “umami gradient” of a level of sophistication that not only impresses the sisters, but causes Suoe to bear his chest like his father, the former chairman, in recognition of Souma’s skill.

So Souma didn’t screw up, and won the respect and acknowledgement of three of the best minds in the business, regardless of age. But will it be enough to defeat Akira? Will the third time be the charm? Will it end in a draw, meaning he won’t be expelled? We’ll have to tune in next week to find out. 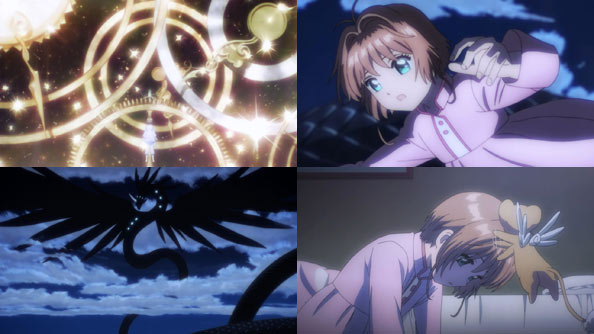 Another night, another dream about clocks, the cloaked figure, and a giant dragon. Sakura knows that she knows the cloaked figure, but can’t quite put a name to it. She wakes from her unsettling dream just before her alarm goes off, momentarily scaring Kero-chan by being so out of it.

That early alarm is so she can meet her elementary school friend Rika at the park so Rika can give her some books to read to children at the hospital, because of course Sakura does nice shit that!

It’s a big day in home ec class, because they get to make cake rolls. Akiho doesn’t have Momo on her bag because Kaito is at home mending her scarf, and we finally see Momo move and speak…and eat chocolates while lounging on an adorably tiny chaise lounge.

Whatever Kaito is up to, Momo is also in on it, and rather eager to get on with things. “The collection of cards” is part of their plan, and as it’s proceeding steadily, The Time To Do…Something will soon arrive.

That collection of cards continues when everyone’s cake rolls suddenly come to life and eventually combine into a giant monster. Tomoyo shields Sakura while she releases her staff and puts everyone else to sleep before getting chased out of the school by the MegaRoll. Sakura takes to the sky, only for the roll to take flight itself.

Sakura manages to restrain the MegaRoll with her “Spiral” Card, and secures the new “Appear” Card. Syaoran shows up to help her back down, but their lovely reunion is marred by Tomoyo and Kero’s cameras.

Akiho manages to salvage her decorated cake rolls to give to Kaito, and is very happy when he says they’re both adorable and delicious. But things take a darker turn when Kaito puts Akiho to sleep once more and whips out that damned pocket watch of his ominously going tick-tick-tick-tick.

I’m fine with Akiho having a little thing for Kaito, but definitely not okay with keeping her in the dark about both the cards and the cloaked figure shared dreams.

It’s clear Akiho isn’t hiding anything from Sakura, but is a tool of Kaito and Momo. Hopefully at some point she can regain her agency and put the meddlers in their place; perhaps with help from Sakura & Co.

After running from a somewhat pathetic display from a suddenly sobbing and Raving M (who actually believes Pitohui will murder him IRL if he loses), LLENN decides she’ll have to win the SJ all by herself, despite her opponents being very smart, crafty, and downright scary in their relentlessness.

Her foes look tough and grizzled, and aren’t afraid to rain bullets down upon LLENN in order to spring her from her hiding spots. The only thing is, she’s so small and quick actually getting a killshot proves most difficult. Despite her wavering confidence and the near-arrogant attitude of her opponent, both parties are on the same level here.

Perhaps due to her critical HP level, LLENN starts to hear her P90 “P-chan” glow, talk to her and even sprout eyes to make a face, which is definitely the most demented and terrifying thing GGO has shown us thus far.

Regardless, P-chan manages to fire LLENN up, and she remembers how and why she’s succeeded so far: not by running, hiding, and keeping her distance, but by blazing in so close to her opponents they cannot get a clean lock on her, and overwhelming them with her quickness, and peppering them with P90 bullets.

She executes her preferred strategy by taking on Eva, the “Boss” of the enemy squad, whose enormous size and brute force end up momentarily overwhelming LLENN, who needs a last-second assist from M, who manage to gathered up what was left of his decency and rejoin the fray (and who does thrive from great distance).

Eventually, LLENN and Eva run out of bullets, but Eva’s lieutenant tosses her a new clip, and LLENN has no choice but to sacrifice P-chan to shield her from the bullets, then whip out her knife and carve the Boss up like a turkey to take the SJ win, demonstrating the literally cutthroat tenacity required to prevail over such a tough opponent.

Back IRL, the short cute girls Karen passes by so often finally approach her, led by Nitobe Saki. They’re second-years at the high school affiliated with Karen’s college, and just wanted to tell her how stylish and cool she always looks, especially with her new ‘do.

Then Saki draws Karen in close with a handshake and quietly congratulates her on her victory. Saki is Eva, the hulking Boss she defeated as LLENN, and her friends and fellow rhythmic gymnastic teammates are ready for a rematch any time.

The Gran Crevasse is now under human control, but at the cost of about 40% of their parasites. Plantation 13 has been devastated, and Mistilteinn is without reliable sources of clean water, food, and electricity. Squad 13 has been ordered to stand by, and they’ve stood by for a month with nary a word from Nana or Hachi and only weekly deliveries of rations.

Despite all that, the group has never been closer. The squad went through the wringer and came out with bonds stronger than ever. The decision to collectively forgive and embrace Zero Two has also led to her pitching in and working diligently to do her part to help everyone out in the tougher times where their every domestic need is no longer taken care of.

The lack of sorties means Goro is a bit restless, while when Michiru asks Kokoro to cut his hair (during which time he works through his angst rather nicely), Kokoro gives him a kiss, and is wordlessly rebuffed.

There are also signs that the parasites might not be long for this world. Ikuno suffers from headaches and fever, and while bathing, Zero Two discovers white hairs among Miku’s red locks. Still, Hiro is having fun, and would love to live the way they’re living forever; sentiments Zero Two shares.

The two also spearhead a different kind of operation: one that will ensure the squad’s survival even if the food rations end. The squad catches their own fish, prepare them, and eat them on their own, a huge step towards independence for the once-coddled parasites.

While they’re engaging in this operation, Ichigo comments about how the mood of the squad has changed, how she likes the change, and how she admits she initially misjudged Zero Two as being fundamentally “different” from the rest of them; and now believes that not to be true. 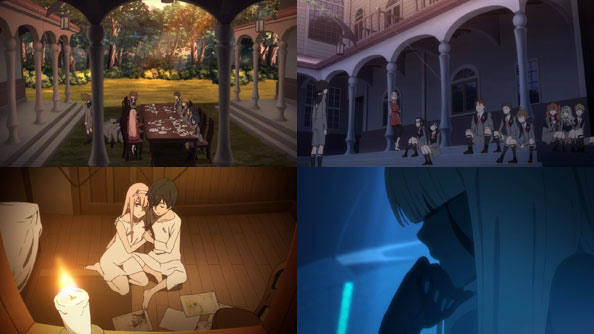 In another case of the parasites perhaps not being quite as well as they could be, Zorome calls Futoshi out on his recent habit of not eating, or throwing up what he does eat. Zorome tears up while pleading with his comrade to eat if he wants to survive.

The squad may sometimes butt up against each other in these lean and trying times when they’re not sure when their next meal or drink will come, but Hiro maintains that this is all a good thing for them. He feels like this is “where they truly belong”, because there should be, and is, more to their lives than piloting FranXX and fighting Klaxosaurs.

Later that night, while drawing beautiful illustrations drawn from her memory of the picture book she had—her first “pretty thing”, Zero Two admits to having learned that being human is about more than looking human, and that Hiro’s humanity was the kind she truly wanted.

Their bliss is short-lived, as expected; Zero Two senses…something off in the distance—someone who looks for all the world like some kind of humanoid Klaxosaur pilot, like her, no doubt come to sour what had been such a pleasant and tranquil mood.