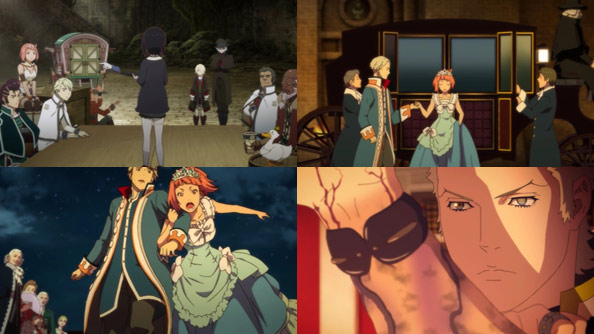 Fancy Royal Ball Caper, anyone? Nina and Al’s big arrival is briefly interrupted by a flashback to Rita going over the plan to snatch Charioce’s bracelet. Everyone plays a role, including El, if the Onyx Soldiers get involved (with Azazel watching his back).

Nina realizes that as the ‘getaway vehicle’ her role is crucial to success (just as she trips on the palace steps). She’s been able to transform at will, but Favaro (paired up with Dias and tasked with actually swiping the bracelet) doesn’t think she’ll be able to when the time comes.

That’s not Favaro not having faith in his student; it’s Favaro knowing how Nina feels about Charioce, and how the King isn’t going to give up that bracelet easily. Al doesn’t have to pretend Nina is his fiancee or sister for long, as Nina ditches him the moment Charioce enters.

This is the Charioce who allowed the Onyx Commander to proceed with the plan to assassinate Nina, so with that in mind I couldn’t help but feel, like Favaro, that there was simply no way Nina would transform into a dragon, and thus no way he mission would succeed. 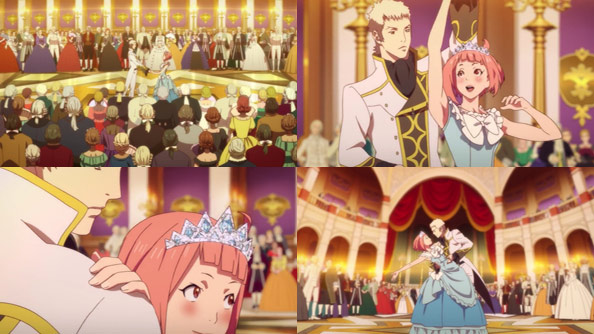 Nina is, however, able to ask the king to dance and draw him to her, and they become the center of attention as they cut a mean rug all over the ballroom. The CGI extras are a bit stiff, but the dancing animation is as crisp and smooth as it was during their first dance at the festival, and just as adorable. It’s almost enough to make you forget that this love story can only end in tragedy and despair.

On a secluded balcony, Nina waits for Charioce to come out and tell her “everything”, as he promised to do the next time they met. But instead, he dumps her like she’s never been dumped before, without even a hint of empathy or compassion. Just “we’re done, don’t come back, go before I have the guards seize you.”

Being subjected to exactly the opposite treatment from him she expected, Nina is a wreck, but Favaro emerges from the shadows to scold “Mr. King” for hurting his student, and demands he give up the bracelet. When Charioce says it can’t be removed as long as he lives, Favaro says he can fix that, but Nina comes between them, not able to betray the man she loves as he was able to betray her.

The guards arrive, but Favaro tosses some smoke bombs, which are also the signal that the plan has failed. Everyone evacuates without any trouble, but Al tries to go off on his own, only to be intercepted by Azazel and El; the three later encounter Jeanne and Sofiel in the streets.

Nina, Favaro and Kaisar end up at the waterfront, where they are quickly surrounded by Onyx Soldiers. Then the burly assassin arrives, prepared to kill the dragon. The look in Nina’s eyes suggests he’s welcome to try.

This was a fun and often thrilling episode, but its impact was somewhat lessoned by the certainty that the caper would ultimately fail. It’s too early for the good guys to possess the means to rob the bad guy of his power. But (please) let there be no (or very little) remaining doubt: Charioce has made his choice: to let Onyx run free. He is the bad guy, however much Nina may love him.