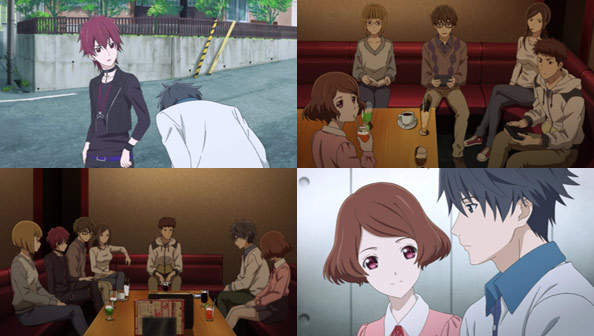 Kei knows he can’t accomplish his goals alone. He needs a little help from friends, classmates, acquaintances…and even his “nemesis” Eri Oka, to whom he genuinely admits defeat for losing in the pre-reset timeline. Before long, he has Eri, Murase, Sakagami, Tomoki, Ukawa, and Haruki in a karaoke parlor, where he lays it all out and asks them for their help.

He gives them time to think it over and leave if they wish, but as he tells Haruki in the stairwell, he already knows they’ll all agree, because he looked a little deeper into the future back in the photo. He feels like he’s lying and he ran away, but Haruki is glad he did, because she knows he’ll always persevere.

Once everyone has indeed agreed, Kei sets his multifaceted plan into operation, inviting Urachi to join him at the karaoke parlor. Urachi brings Sakuin and Kagaya; Kei is all alone…or he looks alone. Perceived vulnerability is key in his gambit, for Urachi has to believe that no matter how things go in their talk, he’s in control and will get the last say.

After remarking how their mutual desire to control all abilities (Kei by keeping them, Urachi by eliminating them) makes them alike, he proposes a compromise: the abilities remain, controlled by Kei, but he won’t be a pure dictator, because people like Urachi will help him.

Urachi agrees to the plan—all to quickly, and after shaking hands with Kei, he has Kagaya shake hands with him too. Only, Kagaya forgets his locking ability because Kei utilizes the combined power of Eri, Murase, and Sakagami. 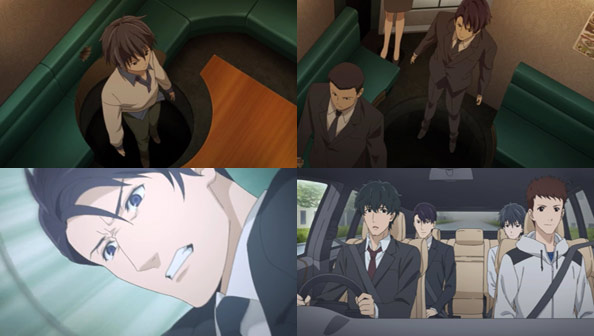 Urachi isn’t worried, however, since he can simply rewind Kagaya’s time to before he forgot his power. He’s also used their time talking to call for backup, and before long Kei is surrounded by Bureau members. But he makes the slip—and takes Urachi with him—by using Ukawa’s ability to construct whatever she wants within a minute; in this case a network of tubes.

Urachi and Kei end up in a car with Tomoki and a very confused Tsushima, meeting Urachi for the first time. When Kei says he’s kidnapped Urachi, Tsushima thinks he’s joking, but he’s not. But Urachi points out that Tsushima is now an accomplice to Kei’s crimes.

Once again Kei, has only bought time and stayed a few steps ahead, but the struggle is far from over. It very much remains to be seen if Urachi can ever be convinced to allow abilities to remain in Sakurada, or if his plans can be permanently thwarted rather than simply delayed. One thing’s for sure: Kei is not alone in this.

For Risei and Tokiomi, the greatest blunder they committed in the Holy Grail War was believing they knew and understood who Kirei was, when he seemingly didn’t even know until recently, after a few key conversations with Lady MacGilgabeth.

Risei, who Kirei was probably planning to kill, was murdered by Kayneth, but by the end of this episode, Tokiomi is dead too, by Kirei’s own hand, petty much forced by accelerating events. 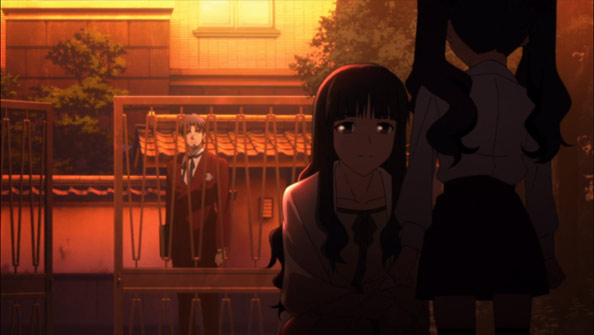 Fate/Zero isn’t subtle about death flags, and it sure looked like even Tokiomi himself sensed his end was near when he visited Rin and Aoi one last time. The only thing that escaped him was the means of that end; surely he must’ve thought if he died, it would be fighting against his enemies, not his own student.

But back to forcing Kirei’s hand: with Risei dead, Tokiomi proposes a temporary alliance with Irisviel, who is flanked by Saber and Maiya in the church where they meet (odd choice of venue if you ask me, considering it couldn’t even protect the observer.)

Iri agrees with Tokiomi that they should save the battle between themselves for the end, once Rider and Berserker are dealt with … but only if he expels Kirei from Japan immediately.

It’s not an unreasonable demand, considering Kirei and the Einzberns have “bad blood” Tokiomi didn’t know about, but Kirei is also not a Master anymore, and thus should step away from the war altogether. Upon leaving the meeting, Iri collapses onto Maiya’s shoulder, confiding in her that she’s not just any homonculus, but the Holy Grail itself given human form.

When this Holy Grail War is over, she will die and the grail will take whatever new form the winner desires; only Avalon is keeping her going. Maiya promises she’ll stay by Iri’s side until the end.

With one more one-on-one chat between Tokiomi and Archer, Tokiomi has decided what he’s going to do, and has Archer’s support. Kirei will get to explore his “dark desires”, and Gilgamesh will gain a more entertaining Master.

Kirei helps Gil finalize his choice by saying the Holy Grail can only be activating by sacrificing all seven Servants, meaning Tokiomi was eventually going to use a command seal to force Gil to commit suicide.

So after thanking Kirei for being his loyal student and comrade, Tokiomi presents him with a will leaving his wealth to Rin and appointing Kirei as her guardian. Kirei then takes that newly-gifted dagger and kills Tokiomi with it.

The literal backstabbing, while extensively telegraphed, is still a powerful, disturbing moment. With this betrayal, Kirei becomes Archer’s new Master, and the dynamic of the War is irreparably changed. And I must say, I fear Kirei a hell of a lot more than Tokiomi as an adversary to Kiritsugu and Iri, because, well, Kirei himself fears the guy.