After a tense moment when Reg’s arms are thrown away by Ozen, she eventually has the gondola lowered for them. Even this relatively short ascent causes deep discomfort to Riko, who has to hurl. She doesn’t make a great impression with Ozen, who chides the kids for going where they’re not allowed, then handing them off to her apprentice Marulk, claiming she has “other matters to attend to.”

Ozen may be a cool, even cruel customer—repeatedly telling Riko how she thought about abandoning her as a baby years ago, and how she probably should have—but hey, she doesn’t kill Riko or Reg, so she can’t be that bad!

Also, Marulk is downright lovely person, proof that even someone who has spent virtually all her life so far from the surface in near-solitude, can not only be reasonably well-adjusted, but friendly and affable as well. I guess it’s ’cause she’s still a kid. It’s too late for Ozen.

The question of whether Marulk is a boy or girl is left unanswered, though Marulk and Reg express identical bashfulness when Riko once again demonstrates no modesty whatsoever after bathing. 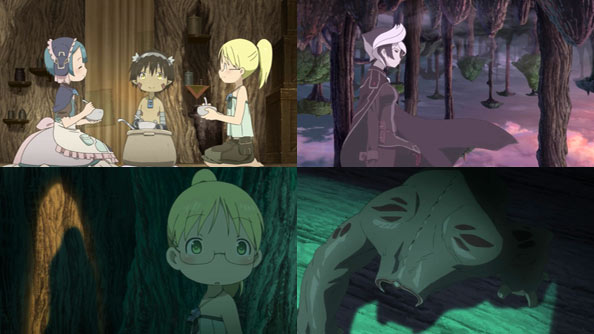 No matter: Marulk is genuinely happy to have Riko and Reg in her care, and enjoys talking with them. She also notes the difference between relics that are sent up to Orth and more complex “grade-4 relics” that stay there. These egg-shaped relics remind me of the Precursor Orbs you had to collect in Jak & Dakster.

After a meal, Marulk even suggests Riko and Reg stay at the camp a while longer to cave raid for relics of their own finding. Riko initially excited by the offer, but turns it down, as she’s not sure whether she should be in a hurry to go see her mom, so she has to be in a hurry. I felt bad for poor kind, meek Marulk, for whom Riko and Reg are the only children her age she’s seen or may ever see.

When Riko has to go pee late in the night, she can’t find the bathroom, but does encounter something else: some kind of strange creature that may or may not be threatening, but also seemed a bit clumsy. While a part we saw resembled a face, it also looked like a headless torso with a spine sticking out. I immediately thought of Reg, and wondered whether this was another android…in a less advanced state of completion.

The next morning, while drying Reg’s sheets (she hid in his bed and wet it), Reg and Marulk are present when Ozen drops the hammer on Riko: Lyza is dead; her journey ends there; she found her White Whistle at a grave on the Fourth Layer. Ozen seems to take a kind of sick joy in telling Riko this, but to her credit Riko doesn’t get upset like she did with Nat back in Orth.

Instead, she and the other two follow Ozen to her “chamber”, a foreboding place where we see books, what looks like a second Ozen body, and most perplexing, a very smooth, white, somewhat iridescent cube, which reminded me of the monolith in 2001. The episode ends there, with what exactly this chamber and cube are left unanswered until next week.

My educated guess (which probably isn’t anything special) is that Ozen has been researching and developing robots like Reg, and possibly using that same technology to make her “immovable”, i.e. give her superhuman strength.

I’m far less certain whether I should believe her when she says Lyza’s dead, but then again I realize Riko’s been operating on some pretty large assumptions with paltry evidence to back them up. You know, as kids do. Yet even a bit of Riko probably knew there was a possibility her mother isn’t waiting for her much much further below ground. But like her, I’d want to see for myself nonetheless.

This episode just wouldn’t quit. It shouldn’t work as well as it does: piling character after character into what was, at least on the battlefield, a one-on-one duel between Saber and Caster, but because of the build-up in the previous episodes, each and every time someone new takes the stage, it adds a new glorious layer to the conflict.

And even if this battle only turns out to be a big tease, now six of the seven Servants have met one another, and have at least a cursory idea of what to expect form each other. We also learn that if there’s one Servant who’s going to keep a kind of noble order and balance in this War, it’s Rider.

When Lancer declines out of obligation to his Master and Saber is insulted by Rider’s offer to make them his retainers, the Master who originally meant to command Rider appears, at least in voice-form; Archibald is tickled that Velvet would actually become a combatant in the Holy Grail War, and intends to teach him a lesson. 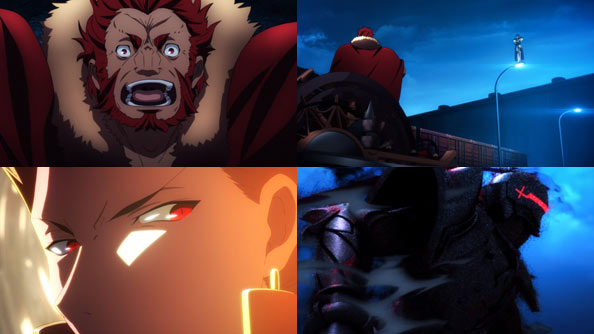 \Rider isn’t having that. Whoever this Archie guy is, he won’t let him torment his Master (that’s his job), who is at least by his side. He calls out Archibald for hiding like a coward, and calls out any other Servants who were drawn to Saber and Lancer’s excellent duel (though if he found it so excellent, why not let it unfold rather than interrupt?)

And so two more Servants appear in quick succession: first Gilgamesh / Archer, then Berserker (true identity unknown). Gil, as is his wont, deems all other kings in his presence to be pretenders (and he has a point, he is the first of them, historically speaking). But Matou decides that now is the time to test Berserker—as well as his own tolerance as a Master.

Archer takes Matou’s bait and exposes his Noble Phantasm for all the other Servants and Masters to see, but ends up with nothing to show for it, since Berserker is not only crazy, but an extremely tough customer, turning every blade Gil sends his way into his own NP. Ultimately Tokiomi has to spend a Command Seal to reign Gil in.

I love how powerful, frightening, and unpredictable Berserker is depicted; he’s a very cool design that seems to shudder in and out of solidity, as if he’s just barely being kept together.

But what I loved even more was Gil’s attempt to save face by basically saying “You’re all beneath me; kill each other off until there’s one left and then come at me.” He’s an arrogant prick as always, but he’s surprisingly likable in this version—perhaps because he was thrown off his game so effortlessly by Berserker.

With Archer gone, Berserker turns his attention (such as it is) to Saber, whose injured hand quickly puts her at a disadvantage, forcing Lancer to save her from a potentially vicious blow. He doesn’t do it because they’re friends, or allies, but because she’s his opponent. If Berserker wants to fight her, he’ll have to get past Lancer first.

That’s Lancer’s will, but unfortunately for him, Archie has Command Seals, and uses one to override that will, ordering him to team up with Berserker to eliminate Saber.  In the ensuing one-on-one (after Lancer apologizes to Saber), Kiritsugu and Maiya have their weapons trained on Archie and Assassin, respectively.

Their careful work is ruined, however, by Rider (again), jumping between Saber and Lancer and driving Berserker into the ground, forcing him to retreat, then telling Archie to order Lancer’s retreat as well. Rider has decided that no one is going to die tonight, and nobody challenges him.

I have no doubt that Saber would have gladly fought Berserker and Lancer at once, bad hand and all. But she’s clearly grateful to Rider for his intervention this time. The primary reason for that is Irisviel: if Saber falls here, she’ll be on her own, surrounded by enemies. Rider also decides to stay out of Saber and Lancer’s fight from now own; he’ll face whoever prevails.

That’s fine with Saber; she can’t fight anyone else at 100% until she defeats Lancer and lifts the curse on her hand. It’s just as well that Berserker withdrew when he did, as a longer confrontation might have killed Matou, who vomits blood and worms in a dark alley, but remains as committed as ever to protecting Sakura by winning the war.

What of Uryuu and Caster, the only Servant who wasn’t on the field? Bluebeard observed everything from a crystal ball, and has taken a particular—and worrying—interest in Saber.