Ayanokouji is a very well-studied observer of human behavior. He doubtless knows every one of the quotes that provide the titles for each episode; this one being “Hell is other people”, from Sartre’s “No Exit”.

Ayano observes that other people are indeed hell for his potential star witness Sakura Airi: he notices that while Kushida is able to easily invade people’s personal space, Sakura resists her, nullifying whatever power Kushida has over the vast majority of people.

(Naturally, Horitika is also immune to her charms, while Ayano knows her true identity, so throw in Sakura and Kushida is far from invincible.)

Luck is on Ayano’s side, however, as a trip to the electronics store with Sakura and Kushida ends up providing him the opportunity to show Sakura that not all other people are Hell; or at least that she can trust him.

Because Ayano is simply being Ayano (at least the one we know) and nothing else, Sakura’s intuition doesn’t see deception, while her reticence around Kushida suggests it does detect hers. 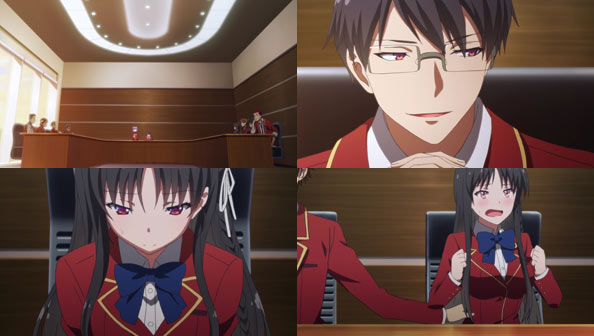 All of this is to say that Sakura takes Ayano’s advice to “do what she wants” and agrees to testify in the Sudo case; it shows that despite her (quite sensible) hiding of her secret—a sexy modelling side-gig—Sakura has a strong sense of justice, like Ayano, and her gut is telling her to listen to it, even if it means going through Hell (i.e., other people).

COURTROOM of the Elite  takes over in short order, and has all the makings of a show trial, with the Class C victims and their partially self-inflicted injuries given all the benefit of the doubt because, well, Sudo doesn’t have a scratch on him, and is a short-tempered asshole to boot.

If a summary “guilty” verdict is to be avoided, someone has to come to Sudo’s defense. But because Horikita’s brother the President (her kryptonite) is attending the trial, she freezes, completely losing all composure and confidence, and Ayano has to pinch her in her side in order to restore her to coherence.

It works, and she immediately begins the work of wearing down the credibility of three guys who weren’t looking for a fight all ending up injured. When they simply rebut with the correct assertion that Sudo often defies common sense, she whips out her Sakura Card.

We’ve only just met Sakura Airi, and yet there I was, so proud of her, and hopeful that I’d be as strong and brave in the situation in which she chose to be, exposing her revealing photos in order to establish why she was using her camera, before providing another photo of the fight itself, proving she was there…but not proving who instigated the fight.

Sakura Airi’s boss witnessing got Team Sudo past Level 1, but it doesn’t look like she’ll play a further role in helping to ease the burden of proof where who started it is concerned. But her good work also gave the defense a way out: Class C’s homeroom teacher offers a compromise, which is really more of a plea-out: only a two-week suspension for Sudo and one-week for his students.

But that plea requires that Sudo plead guilty, and we’re at least operating under the assumption that as awful and destructive as he is, he didn’t start the fight. So the offer is rejected. Instead, Horikita doesn’t hold back in her harsh and completely accurate assessment of Sudo’s attitude problems, and posits that Class C aimed to exploit those problems by setting him up.

Her brother, perhaps more impressed than he’d admit by his sister’s performance thus far (after a shaky start he probably thought was par for the course), will allow another day’s time for each party to prove their innocence or the other party’s guilt. He then raises the stakes, as one does in courtroom dramas: if they fail, expulsion is on the table.

This was a dense, thrilling outing of Elite Classroom that made me an immediate fan of Sakura, and a continued fan of Ayanokouji, Kushida, and Horikita. That Sakura won Sudo’s defense team more time makes me confident that they’ll find a way to clear his name and show up Horikita’s brother.

Like Loading...
As Tokiomi apologizes to his Servant Archer (AKA Gilgamesh) and begs him to be patient as the plan unfolds, Waiver celebrates the death of Assassin, but his Servant Rider (AKA Iskandar) doesn’t really care, and is far more concerned with acquiring B-2 Stealth Bombers and other weaponry with which to defeat…Bill Clinton.

I enjoyed the contrast between these two Servant-Master pairs, with Tokiomi exercising the utmost deference to Archer, who abides by his wishes while Rider is more of a constant nuisance to Waiver, who can’t even get him to enter spirit mode. I can’t blame Rider; Waiver may have shown guts in stealing the relic with which to summon him, but he hasn’t done anything to inspire confidence since then.

Rider’s not caring about Assassin’s death is just as well, since Assassin isn’t actually dead; he can take the form of many different people. What is dead are Kirei’s chances of winning the War, so he withdraws and is granted asylum in the Church by the observer, his dad Risei, and plans to use his Assassins to spy on all of the remaining Servants for Tokiomi.

Meanwhile, with Saber summoned and ready to go, she accompanies Irisviel to Fuyuki City, her love’s hometown, and the first place she’s ever left Einzbern Castle to visit. While Iri sightsees, Saber is her knight and bodyguard, wearing a stylish, practical black suit that contrasts nicely with Iri’s snow-white garb. They make a stunning pair…even though Iri isn’t Saber’s real Master.

That guy, Kiritsugu, arrived in Fuyuki a bit earlier, and enters a hotel room to find his assistant Maiya and a cache of weapons with which he’ll fight the War. When his thoughts turn to his frail daughter and he momentarily despairs, Maiya re-centers him by taking him in her arms and kissing him.

Whatever history those two have, I doubt it’s a threat to the union Kiritsugu and Irisviel, an unexpected pairing, but both a necessary and intriguing one. Their love for and trust for one another is above reproach. Irisviel, meanwhile, enjoys a walk on the beach with her night in black tailored suit, until Saber detects trouble nearby.

The women head to the harbor, where the Servant Lancer is waiting for them, but with no Master in sight. Far from being concerned by a potential attacker in the night, it would seem Irisviel was acting as a faux Master of Saber in order to accomplish what came to pass: luring out the last Servant unaccounted for.

As for who commands Lancy, I’m not ruling out Archibald, who has been curiously absent despite Waiver having stolen his relic for Rider. And as for who will win this duel, I suspect neither party will end up dying, since we’re only three episodes in. A draw, perhaps? Either way, I can’t wait to see it.

Zero continues to excel where often UBW fell down, managing to make virtually every patch of dialogue (or monologue) compelling, integrating just enough comedy to avoid being too stodgy or serious, and most important, making every participant either eminently rootable, deliciously loathable, or a lovely synthesis of the two.