Man, those Titans look like the “Came With the Frame” family, wearing seemingly warm, friendly expressions. To bad they only look like that because they’ve found fresh humans to eat. The fact that Titans (unique variants aside) aren’t particularly grotesque monsters  but look simply like scaled-up naked humans who act purely on instinct, has made for quite a skin-crawlingly disturbing dynamic.

This week, we see Jean, who never wanted to fight on the wall in the first place, almost fall backwards into a position of leadership and the esteem of his peers, not because he performs amazing feats of badassery like Mikasa, but because he’s just…one of them. Not particularly strong, but able to assess situations and rally others to his side. After all, if someone like him can keep his cool (most of the time anyway) in such awful scenarios as he faces this week, so, they believe, can they. 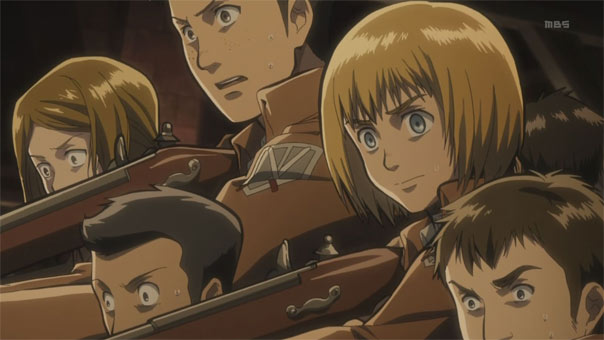 Speaking of lacking either physical or emotional brawn, Armin starts this episode content to be left behind lest he slow Mikasa and Connie down. But like Eren, Armin is Mikasa’s family, and she’s lost enough of that, so she’s not leaving him. Since he’s going to be a burden to them one way or another, Armin hatches a plan: something neither Mikasa nor Connie would have ever conceived of: lead the weird Titan-fighting Titan (TFT) to HQ so he can take out he Titans there, allowing them to resupply and continue the battle.

So Mikasa and Connie (with Armin in tow) set to work killing all the Titans around the guy, until he notices the ones gathered around HQ and gets to work. That handsome couple up top are his first victims, who are killed before Jean’s eyes just as he’s ready to give up (there’s a lot of instances of people about to give up in this show; all of them perfectly justified).

Once there, Armin comes up with another plan. In the process, he transcends his whiny third wheel act. Now, he’s a crucial member of the ramshackle unit, not just because Mikasa draws strength from him being alive, but because he just might be the sharpest tactician they’ve got. 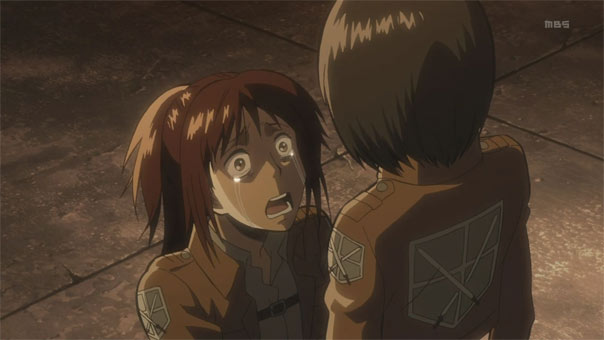 This plan has a lot less margin for error than the TFT-luring operation. Everyone has to put their lives on the line for the sake of everyone else. Any slip-ups, and they could all die. Seven athletic fighters hide in the rafters, waiting for the rest of the unit to blast the seven Titans in the head with shotguns so they can swoop in for the kills.

And while Connie and Sasha fail to strike killing blows to their Titans, Mikasa and Annie, two of the toughest ladies around, bail them out. I like how Sasha is pissed off with herself for giving up and not trusting her comrades would save her. Now she knows better. 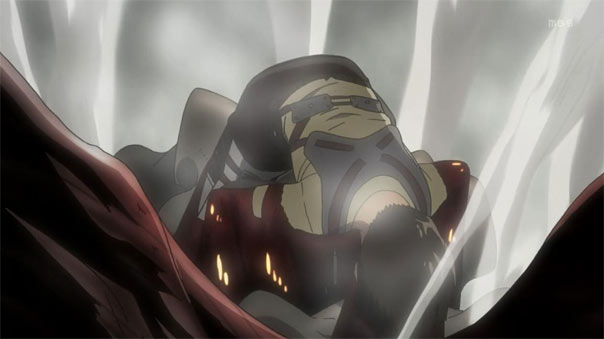 When they resupply and return to the surface, their would-be TFT ally is in the middle of a cannibalistic scrum. As they debate over whether to continue to rely on him, he dispatches the last of the Titans and collapses, armless. Then, from the dissolving remains of the TFT carcass, a regular-sized human form emerges – the human we all knew was in there, kicking Titan ass as a Titan.

But I must tell you, while I fully expected Eren to be in that TFT, I was not prepared for the emotional impact of Mikasa running to him, embracing him, then totally losing it when she hears his heartbeat. That was even the title of the episode, and it still absolutely slew me.

There will certainly be many different reactions to Eren being a Titan (or having the ability to pilot them). Not all of those reactions will be positive. But right now, the only thing that matters to Mikasa—and me—is that the heart of the person she holds most dear in all the wretched world is still beating.