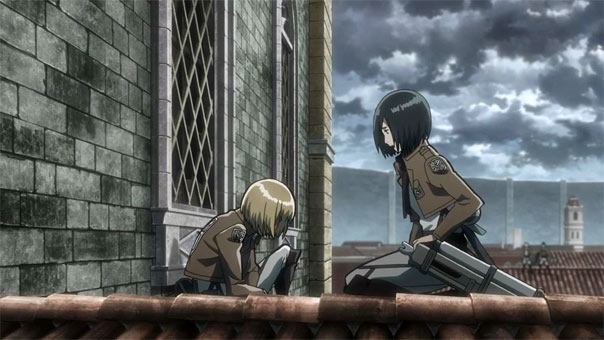 We quickly learn this week that those intense flashbacks to when Eren and Mikasa first met, and Mikasa found her purpose in life—to be with Eren—was all simply building up for the moment Armin tearfully informs her that Eren died to save him.

It’s another cruel blow to someone who’s already endured so much pain; in fact, it figures to be the final blow; after all, Mikasa has been going on over and over about there being no other reason for her living than Eren.

To Armin’s surprise, and mine too, however, Mikasa doesn’t break down; not outwardly anyway. Instead, she seems to shut down right then and there. Her eyes lose their sparkle. But for now, she sticks to her duty. She gives a big speech about being far stronger than all of them (which is true) and calling them pathetic cowards.

She’s going to go fight and live, even if she has to do it herself. Others follow her, whether due to a sudden spark of motivation from her words, or out of shame. Elsewhere, it’s so grim one soldier successfully loads a gun so he can put it in his mouth and end it all.

But like Armin, we know something’s not right about how Mikasa is proceding. She’s going too all out; killing with extreme prejudice until her gas supply is totally exhausted. And with no gas, she has no mobility, and no more hope of suriving the gathering Titans.

She kneels in an alley, waiting for death…but she reflexively doesn’t let herself die, in spite of herself. As a Titan comes at her, then another, she remembers Eren, and dodges, and fights back, like he did, to save her. Then one of the Titans kills the other, and leaves her alone. Wait…what?

This “ally” Titan—with familiar unkempt hair and steely teal eyes—is Eren in another form, to my eyes. And he kills the other Titan with the same raw ferocity he killed one of Mikasa’s captors; as she puts it, putting “all the manifest anger of humankind” behind his righteous blows that rip his own fist apart, only to re-heal instantly.

It’s too soon to be sure, but this “unique variant” may be humanity’s first real effective weapon against the Titans. If he pans out as a reliable human ally, he certainly won’t be a total game changer; he’s just one “good Titan” against countless scores of Titans of all shapes, sizes and strengths. But I for one am glad Mikasa and the little people have scored a break, even if it’s a temporary, incomplete one. Like them, I’ll take every break I can to stem the rising tide of blood and anguish.