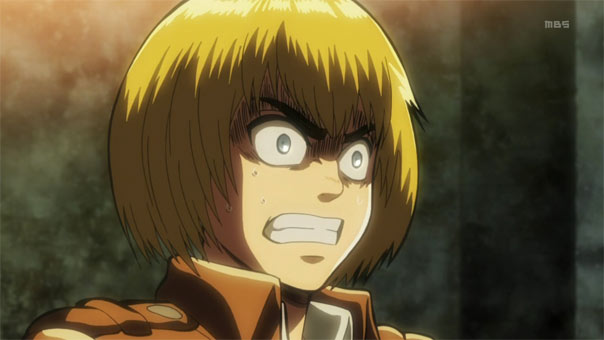 After building a partial Titan to protect Mikasa and Armin, Eren considers going on alone to his parents’ basement in Shiganshina. In the present situation, Armin is crippled not only be fear, but the feeling he’s worthless and holding the other two back. One would think he wouldn’t still feel this way after his baller plan to liberate the resupply depot, but then again this is a pretty stressful situation, which can lead people to reopen still-raw wounds.

The reality is that Armin is a crucial member of the young triad: the brains. So it makes sense that those same brains can betray him by making him overthink things and be his own harshest critic. One reason Eren is a more effective conventional fighter is that he doesn’t think as much. So Eren leaves it to Armin to secure his safety as well as Mikasa’s, because of the three he’s the only one who can do it. 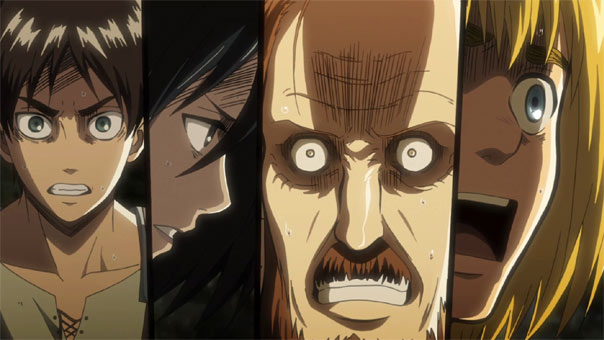 To do so, Armin must disarm and expose himself to Woerman and his troops; which takes every drop of courage he has, but also proves he has plenty of courage. Unfortunately, Woerman is so spooked (rightfully so) by the prospect of Titans who look, walk, and talk just like humans, he’s no longer thinking rationally, only viscerally, which means he’s impervious even to Armin’s most dogged and reasonable arguments for sparing their lives. 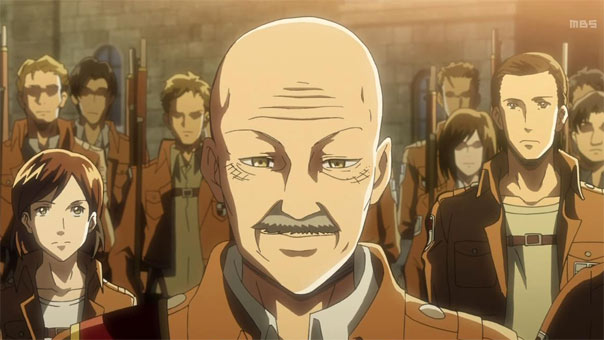 Woerman is about to take them out with a second cannon shot when his arm is suddenly stayed by his superior, General Dot Pixis, whose sudden presence catches everyone by surprise. He’s a bit of a weirdo (if he’s going to be eaten by a Titan, he’d prefer if it was by a smoking-hot lady Titan), but he’s got a lot more sense in this situation than Woerman, and more importantly, his actions aren’t driven by fear. He uses his judgment and his authority to save the three cadets, then asks to meet with them personally atop the wall. 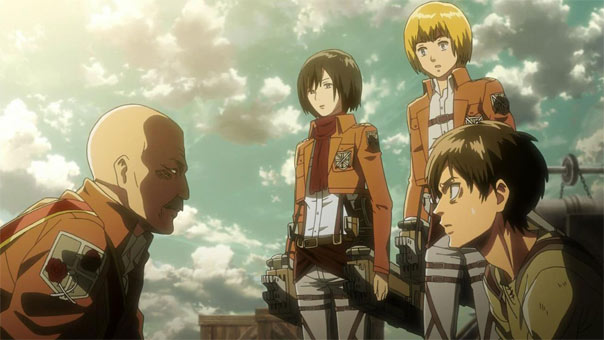 I liked Pixis’ attitude towards the nobility in an earlier episode, and I like his no-nonsense practicality in dealing with Eren here. He takes Armin at his word that it’s possible someone like Eren with “Titan Power” can be utilized to re-take Trost, if only by sealing the breach in the wall with a boulder.

Pixis first asks Eren if he can do it, but Eren isn’t entirely sure and worried about answering “irresponsibly.” So Pixis rephrases: Will he or won’t he? Obviously, he will. But even if Eren has found a valuable, powerful ally in Pixis (and we’re by no means sure of even that), and even if he does seal the breach and save the district, there will always be some, like Woerman, who won’t look at the evidence or listen to reason. Those who have let Fear take over, and will consider anything remotely Titan-related an enemy to be vanquished.