The show chooses a rather odd time to introduce us to a new group of characters in the elite Scout Regiment, led by “neat freak” Captain Levi. I saw bizarre because there’s still quite a bit that needs to be resolved with Eren. As great as it is to see soldiers other than Mikasa having success in killing Titans, the truth is I was patiently waiting for the show to get back to the main characters, which thankfully happens about a third of the way in.

Before returning to the present, we find out what became of Eren after being swallowed. Not surprisingly, he ended up in the Titan’s gut, surrounded by his dead comrades being slowly digested, which…gross. But Eren refuses to give up, doggone it, and a light flashes and he transforms into Titan Eren, bursting out of the Titan who ate him and commencing his rampage.

When Eren wakes up, he finds himself in a bit of a predicament. No good deed goes unpunished here on AoT, which means an entire battalion of his fellow soldiers have their weapons trained on him, Mikasa, and Armin. They’re led by a very twitchy commander who looks like he needs a lot more sleep, and everyone is convinced Eren is a Titan in disguise who needs to be eliminated.

With Eren still highly disoriented, negotiations break down pretty quickly, with Mikasa only offering temporary relief by putting herself between the guns and Eren and challenging anyone who wants to try to hurt him to get through her first. Eren finally cries that he’s a human, but the commander has already made his decision. Mikasa tries to get Eren away as the cannon above them fires, but Eren…does something else. 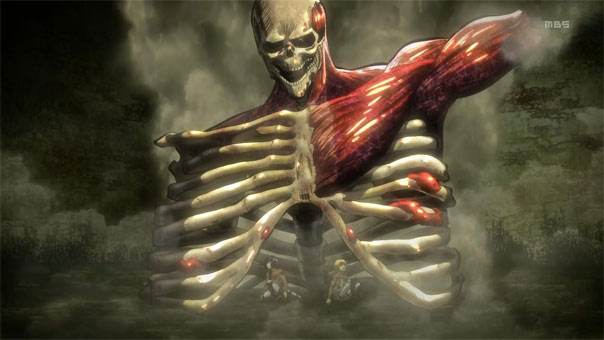 And that something else is transforming back into a Titan, using his only partially constructed Titan body to shield his friends from the cannon blast. Once again, a bold action keeps him and them alive, but only a little longer: it doesn’t exactly help his claim he’s human, and I doubt such a trick can be pulled twice in such short order.

Preceding Eren’s last-ditch effort to keep death at bay, he experiences flashes of memory, like his dreams in earlier episodes, in which his father tells him the key around his neck and the secrets in the basement of their home are of utmost importance. I imagine the power he’s awakened has something to do with those secrets.

But first things first: how are he, Mikasa and Armin going to stay alive long enough to uncover those secrets? Forget the Titans; he’s got humanity against him at the moment. Talk about ‘out of the frying pan, into the freezer’.