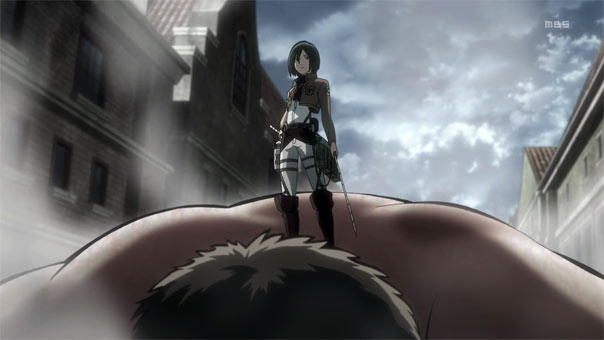 I wasn’t all that enamored of Armin’s extended whimpering at the beginning of this episode, but his realization that not only is it a cruel world where the strong slaughter the weak, but it has always been so; he just had to lose his best friend to realize it fully. And messed up as he is, he can still look at a desperate Hanna performing CPR on her clearly-dead Franz and think stop…he’s already dead. I am weak. We are weak. But we don’t have to fall to the strong today.

While Armin laments the apparent loss of Eren and the rest of his unit in its entirety, Mikasa bags her first Titan (or at least the first Titan we see her bring down), an “abnormal” that runs a lot faster than the others and was about to go to town on a throng of evacuees who weren’t able to escape because a haughty merchant is blocking the gate with his wagon full of goods.

Mikasa’s job is to kill Titans, but she’s killing Titans to save lives, not goods. So she clears the gate a blade less than an inch from the merchant’s eye, then goes back to work killing Titans once the evacuation can proceed. Her superior wonders what the hell this kid went through to become so tough and unyielding. I too have been wondering where she got her seemingly superhuman strength…and how she, and Ackerman, came to live with the Yeagers. 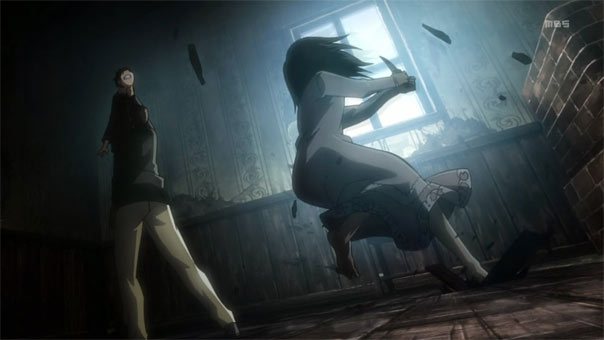 The show enlightens us with a gut-punch-riddled flashback. Armin’s assessment of the cruelty of the world is felt firsthand by Mikasa, whose loving mother and father are murdered right in front of her eyes. They prepare to sell her into the service of old perverts, as she’s a rare (if not one-of-a-kind) “oriental”. And that’s exactly what would have happened, had Eren not tagged along with his dad on a house call to the Ackermans.

When Eren realizes what has happened to the parents of a girl he was going to meet for the first time (and was going to weigh whether to be friends with her based on “how she acted”), he goes off on his own to rescue her, achieves entry to the criminals’ hideout by pretending to be lost, and then kills two of the men holding her, one with a knife to the gut at the door (just how Mikasa’s dad was killed), the other more viciously with a spear-broom.

But there’s a third man, and once he has his hand around Eren’s throat, it falls to Mikasa, who had always abhorred the inherent cruelty and violence of nature. Eren gives her the rundown: Fight, or die. Win, and live. That’s it. With the knife in her hands, a switch flips: she’s the strong one here; the man busy with Eren the weak one. With overwhelming force, she fights and wins, and she and Eren live. 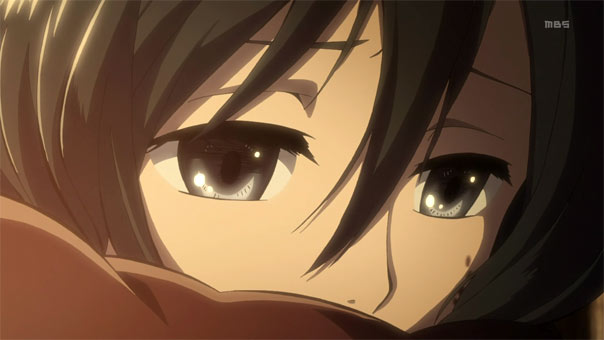 The two kids are shell-shocked in the aftermath of that ordeal, but Mikasa is still in tune with reality enough to say she’s cold, and ask which is the way back home. Eren and his dad welcome her into their home, which becomes her home. Eren gives her his warm scarf; perhaps the same scarf she still wears in the present.

Eren is her everything; he saved her life, and woke her up so she could save both of them. He’s the reason she’s alive, and the reason she fights, and wins, and continues to live. As long as he’s with her, she can do anything, and goshdarn it, I believe it. But what if he isn’t with her? What if he’s Titan chow? I know he isn’t, because, well, this isn’t Gurren Lagann and he’s not Kamina…but she doesn’t know that yet.

That aside, this was a tremendous flashback episode that helped humanize and further deepen our understanding of our favorite character in the show by a mile so far. I daresay it was worth arresting the momentum of the last couple episodes.