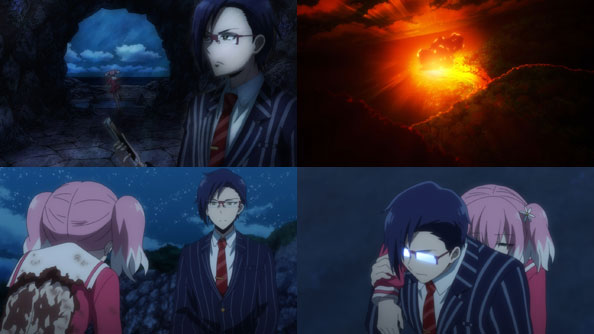 When Nana breaks free of her icy anklet, Jin uses Moguo’s fire Talent to stop her in her tracks, but apologizes for going too far. Still, her phone’s “potential kill count” messages cause him to suspect she’s a “crusader” like someone from his class who believed he was sent to kill the “minions of Satan.”

Jin isn’t interested in using others’ Talents to force Nana to talk. He wants to patiently build trust with her, human to human, something he wasn’t able to do with his class, whom he dehumanized all too easily when he used their own Talents to kill them.

Badly burned and about to lose consciousness, Nana gives Jin a little of what he wants: insight into who Hiiragi Nana is. She tells him she had an older brother she was too young to remember, and a mother and father who were murdered one night by an Enemy of Humanity.

Before passing out, she smiles when he asks if she sees Talented as Enemies of Humanity, then he carries her back to the dorms, warning her that now that the bodies are starting to pile up, the psychopaths among the current class will soon “come out of the woodwork”. Basically, she’s not the only murderer on this island.

When Nana comes to it’s in Michiru’s dorm; Jin left her at her dorm and Michiru did what Jin knew she’d do: take Nana in and heal her. Michiru also mentions that an impostor went to class when she was too tired to go (due to Jin drugging her). Nana realizes if she’s more open with her traumatic past, her reckless actions will be more easily explained by her “noble vendetta.”

Michiru wants Nana to know she’s always there if she wants to talk. As Nana talks to her about how her house was broken into and her parents killed, Michiru exhibits all the qualities of an empathetic, caring, even loving friend. But after revealing Yuuka’s true colors, she can’t help but still wonder if even sweet Michiru has a dark side.

In the meantime, memories of that horrible night well up and haunt Nana. As she ponders her next move in her dorm, Jin pays her a visit. He agrees to return her phone to her if she’ll “share more of her soul” with him via more information about her past. Then Michiru shows up , and Jin disguises himself as the kitty Nana saved.

Michiru and Kitty!Jin listen as Nana gives details about what kind of “typical little girl” she was. She loved games of skill like Chess, Shoji, and Go, and was so good at them that other kids didn’t want to play her. She also made a mess of all the games in her rooms, and played long into the night, often slipping out past midnight to go to the konbini to buy manga, another passion.

Her parents always told her to make sure her window was locked, but one night she fell asleep without doing so, and that was all a burglar needed to gain entry. The next morning she found her parents brutally murdered, and she carried her father’s head out in public. Nana begins to break down over the guilt of being the reason the murderer targeted their house and got inside, but Michiru offers her hand in support.

At some point, Nana falls asleep at her desk, and wakes up the next morning to find Michiru sitting on her bed, awake and oddly alert. Before she can say anything, Kyouya bursts in and asks the two girls to come with him. There’s been another murder: a male student’s throat has been slashed, apparently by a sliding dorm window.

It’s clear Nana didn’t do it this time, which means there is indeed another murderer on the island. But who? The camera lingers on a girl with bangs and a pony tail whose eyes are always shut—according to MAL, her name is Sorano Fuuko. It could be her—whoever she is—or it could be someone else.

For all we know, it could even be Michiru, who may have left Nana’s dorm to kill after Nana fell asleep. That goes against everything we’ve learned about Micchy so far, but if this show has taught me anything, it’s not to trust anyone or anything!