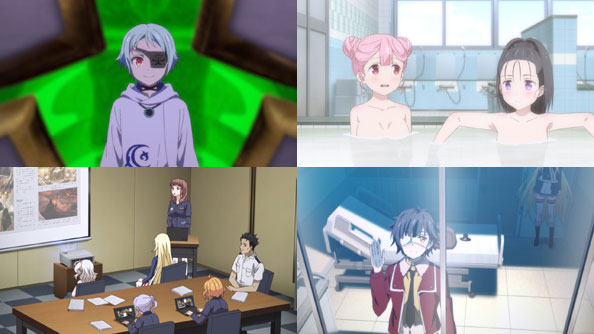 Odin makes it official via hacked video feed at an international summit: he’s provided humanity with weapons to use, a motive to fight, and now enemies to fight. Now it’s up to them to resist their destruction. As far as he’s concerned, Ragnarök isn’t over—it’s still nigh.

Miko notes that Sono has seemingly become stronger following the loss of Yayoi, and also proposes they carry on with Tateyama’s summer festival in spite of the ongoing crisis. After all, if not now, when? Claudia accompanies Satomi on various PR gigs to shore up support for the next battle. 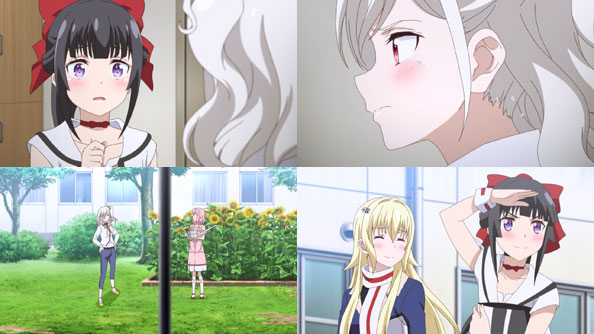 As for Azuzu, she’s extra-burdened by the weight on her shoulders, believing she’s the only one around her “smart” enough to comprehend that if they lose the next battle, it’s curtains for humanity. When Miko wakes her up and presents a yukata for the festival, Azu is furious: how can you think of festivals now?

She lashes out at Miko and runs off because she’s scared, and Miko knows it, so she runs around trying to locate her. Sono hides Azu, but maks it known that pretty much everyone agrees with Miko that this isn’t just an appropriate time to celebrate and make memories, but the only time. After the next battle, memories may be all remains of them. 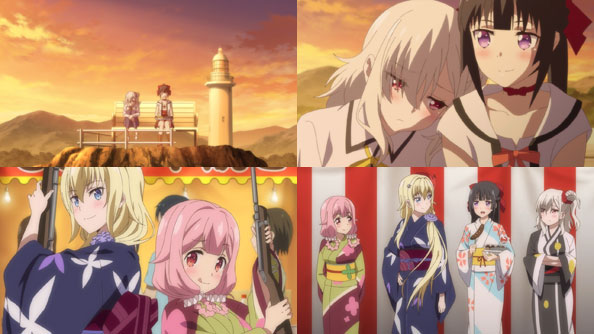 After a brief chat with Claudia, who is as happy and at home in Takeyama as ever, Miko realizes where Azu has gone: the same vantage point where she used to gaze out at the sea when she first arrived. Azu is scared, and apologizes for being weak; Miko tells her she’s scared too, and tells her not to confuse being a crybaby with being weak.

The two lean closer, acknowledging that they may die very soon, but Miko assures her that if one of them dies, both of them will, leading to the most haunting lines of the series: “I’ll wake you in heaven for breakfast.” Now that they’ve made up, they join Claudy and Sono for the festival. 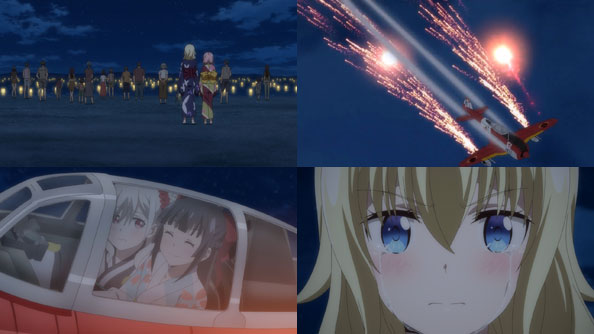 It’s a big success, as they and the townsfolk have a ton of fun doing standard festival stuff. Miko has Azu cram into her Hero Wing to apply the finishing touch: a fireworks display during the casting of water lanterns, meant to console the living as much as guide the dead.

Claudia takes it all in, as it confirms her feeling of home in this place where she one felt so out of place, and adds her song to Miko and Azu’s display, tearing up in the process. When Satomi and the head mechanic see her cry, that settles it: they, and everyone beneath them will do everything they can to protect those tears. The calm has now come and gone, and now it’s time for the decisive storm.