Edamame is moving up in the Scarlet Company thanks, in part, to the Chinese lessons his late mother insisted he take. Back then, he idolized his valiant attorney father Seiji, as did his mom, whose only complaint was that her husband worked too much. Both were completely unprepared for the news that he was helping the mafia traffic children.

While Makoto responded to his dad’s betrayal with rage and resentment —and eventually turning to a life of crime just like the ol’ Pops, only pettier. His mother collapsed from the shock, and was bedridden the rest of her days, but she never gave up hope in her Seiji.

The flashbacks to good times abruptly turning bad then worse for Makoto are efficient but particularly well-done. His mom warmth and forgiveness despite the harsh betrayal she endured—something it’s clear Makoto never understood. 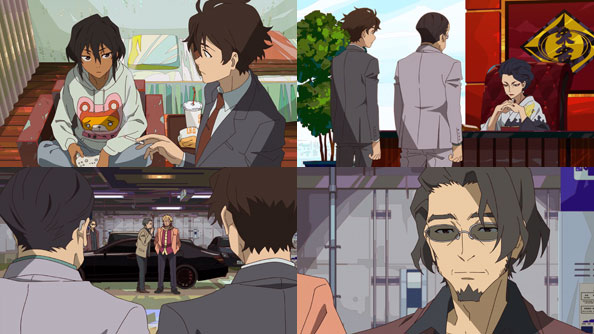 “Sleepy Princess” Abby and her reluctant jailor Makoto is such a bizarre scenario, such is her keeping-it-real ethos, Abby doesn’t treat her jailor any differently than the guy with whom she jumped out of a building in Singapore. Their growth as something like friends is evident when she asks him if he’s alright working for such a despicable business, and isn’t just asking, but is genuinely concerned.

She should be! Suzaku Ikemi’s Scarlet Company is on the brink of war with their satellite organization in Shanghai, which due to China’s economic boom has grown more profitable than its parent and unilaterally declared independence. Their disdain for their Japanese bosses is expressed when their boss, Liu, sends his second-in-command—the boorish Chen—instead.

Chen is accompanied by his interpreter, whom Makoto recognizes is his damn dad, who now goes by the name “Oz”. So that’s where he slithered off to! 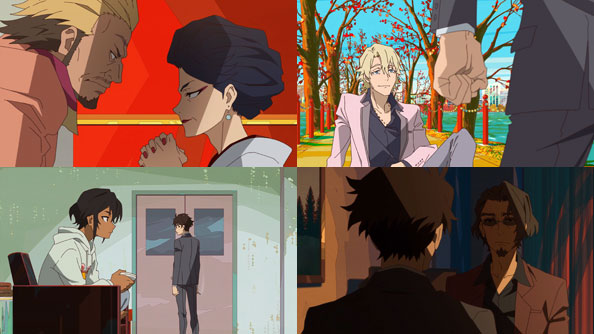 Suzaku isn’t impressed by Shanghai’s little power move and declares an ultimatum, claiming 80% of Shanghai’s profits, even she must know won’t be forthcoming without a degree of bloodshed. Still, her options are limited; with their Chinese cash cow’s leash becoming slacker by the day, she can’t appear weak, lest they regard her as a paper tiger.

Makoto, meanwhile, is furious with the news of his dad’s participation in this job, and suspects it was kept from him on purpose by Laurent, who is flirting with a couple local women when Makoto violently confronts him. That leads Laurent to ask: if the geezer truly “means nothing” to Makoto, why get so worked up about him?

In his next meeting with Abby in her cell (where she’s playing way too many video games), she raises the possibility Seiji did what he did “out of necessity”, got in too deep. She suggests he compare his “loser scumbag” critique of his dad to what he himself was, before he met her and Laurent. Perhaps Seiji has returned to his life because he wants to be forgiven. 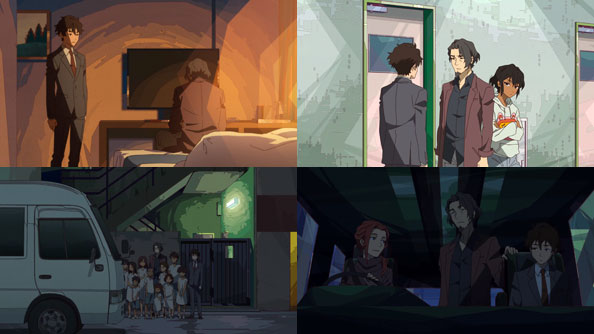 Makoto tests that theory by visiting Seiji in his hotel room. Seiji reveals he was actually just outside the door of Mom’s hospital room, but was too ashamed to walk inside. If he walked inside, she might forgive him, and he wasn’t sure he deserved that. But seeing what a shell of a man his dad has become, Makoto decides to be like his mom, and give him that second chance to be in his life. After all, Seiji is still wearing his wedding band.

Early in the morning, Makoto executes a modified version of the prison break plan, this time threatening the kids with his dad’s handgun; a necessary tactic to get them to go with him. Cynthia arrives with a bus big enough to hold them all, and seems both amused and heartened to see not one but two Edamuras in her presence.

Everything seems to be going smoothly until they get off the main highway and are immediately sandwiched and forced to stop by two mafia cars. One of them carries Ishigami, who while so charming and friendly before suddenly exudes cruel menace. He laments that both he and Suzaku saw something in him, and are disappointed it “didn’t work out”—i.e. that now he’ll have to murder him for his treachery.

Speaking of treachery: Seiji is the one who ratted Makoto, Abby, and Cynthia out to Ishigami, identifying them as the same group of con artists who have been causing trouble in the underworld. When Makoto can’t contain his rage and rushes at his dad, Seiji puts a gun to his forehead, reminding him he’s not his dad anymore…he’s “Oz.”

It’s possible he’s playing a longer game that requires he betray his son so he could save him later. Or he could just be a bastard. We shall see. In the meantime, Makoto & Co. are in deep shit! 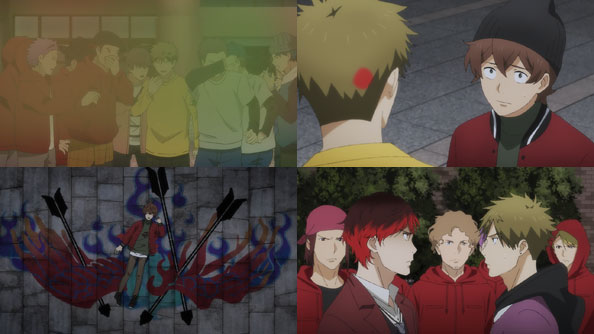 If I haven’t already, I’ll go on record now: Thus far I’ve always enjoyed the IWGP stories that aren’t directly related to the G-Boy/Red Angel dispute, like when Mikoto gained a sister in Guo, or last week’s dive into restorative justice. That said, if the show wishes to close things out by refocusing on the Red-vs.-Blue divide, there are far worse ways to do so than what we got.

This week takes what had been a volatile tinderbox and blew it up with a few bold strokes. What keeps this episode out of four-and-a-half star territory—aside from the fact it’s only part one of two-part story—is that it takes a step back from the earnest urban realism and relies on predictable action-drama anime tropes.

Red/Blue tussles are becoming more frequent ever since the Angels helped the G-Boys put quell an internal dispute. A border dispute on Sunshine Street could quickly escalate into full-on gang warfare, so Makoto does his thing: works with Kyouichi and Isogai to arrange a peaceful meeting with King.

As soon as the Angels’ hotheaded number 3 Utsumi is introduced, we’re invited to believe he’s trying to up his team’s aggression against the G-Boys, just as King’s underling Hiroto tried to do the opposite. But there’s the additional element of a young Watanabe Kazumasa looking like he wants to say something to Makoto, but hesitates…then ends up with a knife in his heart.

The border dispute meeting is off, as the Angels are convinced the G-Boys killed their kid. Mikoto learns of the murder on TV, and rushes to meet with Takashi, who assures him he didn’t order the hit, while not ruling out that a hot-headed underling might have.

Then a bad-case scenario gets even worse when a drugged and clearly out-of-it Mizuki guns Takashi down and flees. As Takashi checks for vitals and calls an ambulance, a man in a white suit and glasses sits in a car watching while someone in the back seat snaps photos of Takashi standing over the gunned-down Takashi…someone with Isogai’s hairstyle.

Takashi is alive but unconscious in the hospital, but the misleading photos are posted online, and the general consensus among G-Boys is that Makoto betrayed their leader and tried to kill him. Their retribution is swift, as some of them launch a van at Makoto’s family produce stand, hitting his mom and nearly hitting him and Guo.

Guo, knowing her brother didn’t shoot Takashi, urges Makoto to start running and find out who’s responsible for this. That brings us to the episode’s cold open, in which Makoto felt like he was having a bad dream. While hiding from various roving bands of G-Boys, he gets a call from Makoto, who uses the call to get a fix on his location.

Judging from the look in his eyes, at this point I was convinced Isogai was responsible for Kazu’s murder, Mizuki’s drugging, and Makoto’s framing. By using Kyouichi and Utsumi’s rage over Kazu’s death, he creates a fine smokescreen in which to freely operate while all hell breaks loose.

As blood starts to spill on the streets, Chief Rei insists Makoto come to the station for questioning, as he was at the very least a witness to Takashi’s shooting. Makoto isn’t ready to do that quite yet, as he won’t be able to solve this riddle from the police station.

Meanwhile, as a satisfied man in white lounges on the bed of a hotel room enjoying a (possibly post-coital?) cigarette, Isogai takes a shower and grins like an evil villain. Which, fine…it’s an interesting turn for a somewhat dull but likeable character, but I was kinda okay with him being somewhat dull and likeable? Not to mention the unpleasant undertones of the only gay guy in the show being the big bad… 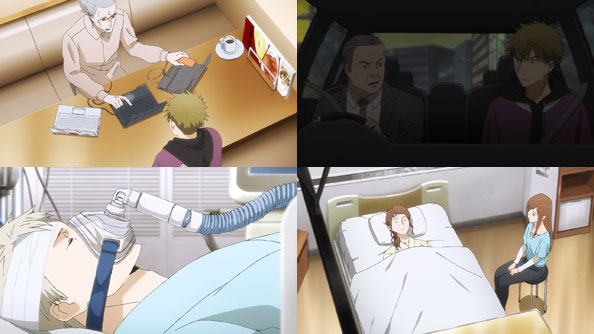 Makoto meets with Zero One in their usual café—which seems odd considering all the G-Boys are after him—but then again, most of the G-Boys are probably busy fighting Red Angels. Here is where Makoto is portrayed as perhaps a bit too ignorant of modern smartphone technology, as the hacker explains the spy app that allow his pursuers to pinpoint his location.

They’re interrupted by Detective Yoshioka, who politely asks Makoto to come with him for questioning. Makoto gets in Yoshioka’s car and explains what he knows so far, but instead of going into the station, he asks that Yoshioka let him go to track down the culprit as only someone with his skills and connections can. Yoshioka doesn’t endorse Makoto’s actions, but also can’t exactly legally detain him.

So off Makoto goes, through dark alleys and across the neon-lit boulevards of Sunshine Street, in the middle of a nightmare from which there is no waking. His mother and his best friend are laid up, and thanks to a devious setup job his neutrality has been utterly destroyed. While this episode took some sensationalist leaps to get to where it is, everything that has unfolded so far remains not only plausible, but inevitable.

I’m just not particularly elated about Isogai being the presumptive Big Bad, because this was a show that didn’t really need one, and in fact always thrived in the gray area between good and bad that best reflected real life.