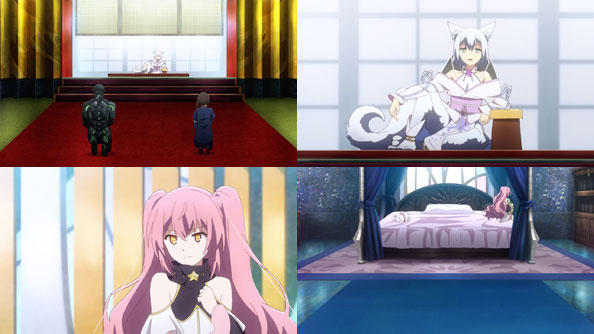 Risya and Nameless meet with the Emperor…and they seem to be an androgynous cat-person. Not only that, the Emperor seems all too aware that a “Witch Princess” (i.e. Alice) has fallen for an Imperial Swordsman (i.e. Iska), and seems pleased with that development.

Meanwhile, Third Princess Sisbell is having troubling nightmares about the demise of her mother the queen that she believes to be visions of the future. Needless to say she’s uneasy and is desperate to find a way to alter that future.

Back in the Empire, Iska, Nene and Jhin are worried about Mismis’ crest being exposed, but they’re bailed out by an imperial administrator who castigates Risya for grossly overworking the unit. They are awarded sixty days of vacation, and they decide to spend them in Alsamira, a desert resort nation that while not officially neutral like Ein is considering an alliance with the Empire.

Alsamira also just happens to be the destination of Sisbell, as her mother sends her there to attempt to convince their leaders to side with the Sovereignty. As a pawn in the continuing political game that is the election of the next queen, Sisbell only trusts her personal butler Schwarz to accompany her.

Then we finally meet the First and eldest of princesses in the green-haired Elletear. She meets with Zoa’s Tuxedo Mask to report something most troubling: apparently someone high up in the Sovereignty is working with the Empire. My first thoughts went to Alice, of course, but we learn she’s not the only suspect.

Alsamira closely resembles Dubai or Abu Dhabi IRL, a wealthy emirate currently thriving on tourism and hospitality, which Unit N07, particularly its female members, are all too happy to exploit. Mismis and Nene show off their swimsuits to the boys, and a day of fun and not fighting the Sovereignty ensues.

As the sun sets and the unit heads back to the hotel for dinner, Nene and Iska split off to buy food and Nene goes off to use the restroom. Whenever Iska is left alone in a city he tends to bump into a princess, and this week is no different…but the princess is. He recognizes her as the astral mage he broke out of prison, but when Nene returns to him, Sisbell vanishes without a trace. Still, Sis is convinced she’s found the “knight of her dreams.”

That night, Rin and Alice, stuck in the palace with mountains of paperwork and other official duties, assist the queen in snooping through Sisbell’s chambers. As Sisbell’s mother, the queen is concerned with what she’s been up to cooped up in her room. Alice and Rin find a clue: a newspaper reporting the arrest and life imprisonment of Iska, the Imperial who saved her. Alice is shocked her sister might know her Imperial buddy.

Back in Alsamira, Sisbell decides to make her move…by breaking into Iska’s hotel room. By acting so suspiciously, she should have known she’d be welcomed as an assassin and not a guest, but she doesn’t seem to care. All that matters is that she’s found Iska, her Knight. I’m inclined to believe she considers Iska the key to preventing the bad future she’s been dreaming of. She believes this because Iska helped her, his “enemy”, when he had no other reason to other than kindness and mercy.

That Sisbell is meeting secretly with Iska will no doubt be a red flag for her sisters and mother, and their already flaky retainers may even consider her a traitor for doing so—and that’s assuming they’re not yet aware of Alice’s many meetings with an Imperial swordsman. While laying the groundwork for some interesting developments, this episode was a classic table-setter: necessary, but a bit ho-hum.