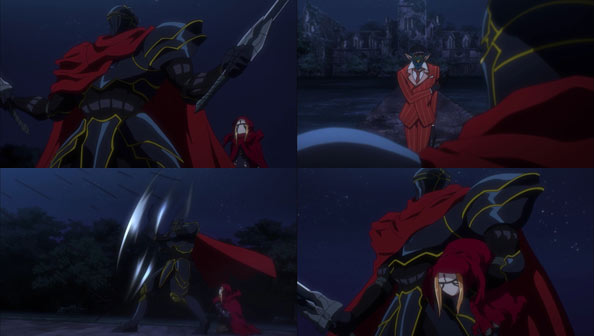 Momon, embracing his role as protector of his adventurer brethren and fights off Demiurge, who also takes on the alias Jaldabaoth for the purposes of this pageant.

Witnessing Momon fight to protect her, Evileye is impressed to the point of fascination, becoming smitten with one of the few warriors she’s met who is actually stronger than her. However, she comes to be disappointed in how Momon ultimately decides to hold her: less like a princess, more like baggage.

The “Tuare” Climb & Co. rescue turns out to be Succulent in disguise, a trick that the warriors didn’t fall for. Zero, last of the Six Arms, shows up to occupy Brain, so Climb and the other guy fight Sucky, with the other guy showing Climb that in situations like this it’s okay to fight dirty. Climb takes the advice to heart by delivering a vicious kick to Succulent’s succulents.

Just when Brain and Zero are ready to get serious, Sebas arrives with the real Tuare, lets Zero (highly skeptical the old guy took out all of his comrades without taking a scratch)  take his shot (utterly ineffective) and ends him with one kick. The only mark against the fight is that he got blood on his attire. 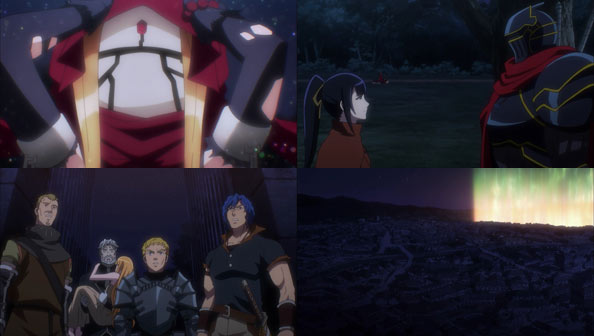 With Sebas’ part of the mission a success, we return to Momon, Evileye and Demiurge, the latter of which retreats so he can set up a wall of fire in the capital, presumably to show the city who’s boss—though if he’s doing it with an alias and not in Nazarick’s name I fail to see how it serves the Tomb; I thought the point was to teach Eight Fingers a lesson? 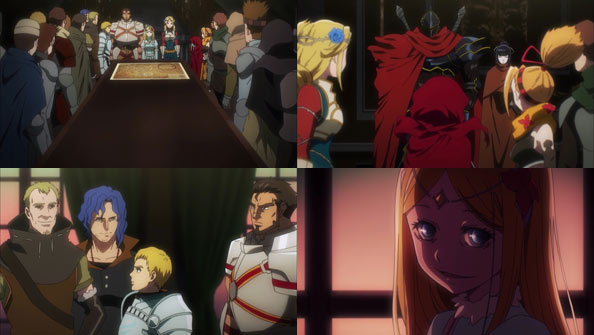 Reagrdless, once that wall of fire is up, Momon decides to join Evileye, the Blue Rose, Brain, Climb, and a mess of other adventurers, all under command of Princess Renner, who sets up a battle plan, briefs her troops, and sends them out to fight the demons within the otherwise harmless wall set up by “Jaldabaoth.”

Renner stays behind in the palace, revealing to her brother and the Marquis her true plan, while showing her true, demented face: she’s counting on Climb dying so Lakyus can ressurect him, a process that will make him as weak as a newborn kitten, necessitating constant attention and care. And Renner intends to take good care of him.