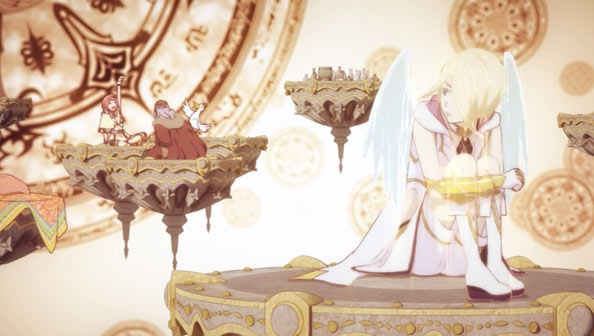 Action is the name of the game on this week’s Baha Soul, with thrilling chases, an intense arena battle, daring escapes, and high-altitude rescues. It all starts when Bacchus, Hamsa, and Nina start talking about how and why Bacchus left Heaven, mentioning the hippogriff. El waits for his chance. 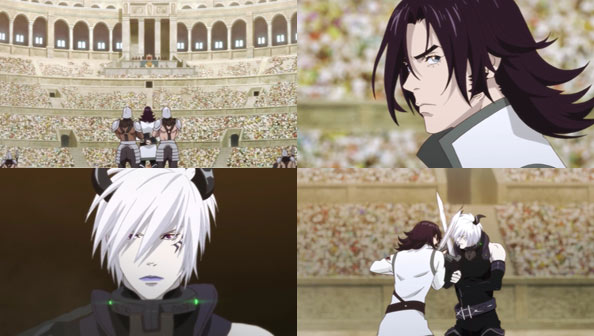 As Alessand continues to side with Charioce and Dias holds out hope for their old captain, Kaisar is stuffed in a cage and released in the middle of the arena, where he must fight Azazel to the death. Azzy may not be quite clear about why he’s still alive, but he’s not just going to lay down for the fallen knight, who manages to hold his own even though he’s missing a hand. Jaime Lannister, eat your heart out.

Once Bacchus, Hamsa and Nina realize El is missing (with Nina wearing El’s clothes, suggesting El went to the unusual trouble of dressing her after stealing her clothes) and formulate a plan to retrieve him, using lots of wordless hand (and wing) signals but getting the timing all wrong, causing a startled El to take wing and fly off. 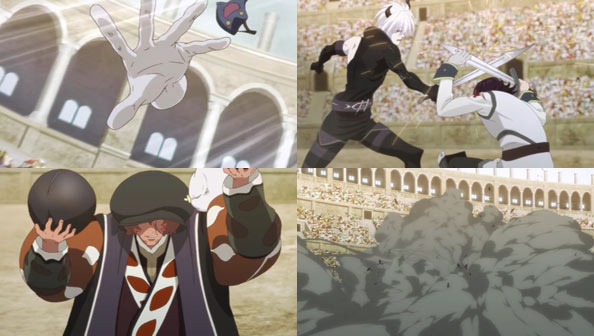 Just when Azazel is about to put Kaisar down, Favaro, in the stands all along in a very puffy disguise (and clean-shaven), throws him Rocky, and Kaisar quickly gets the upper hand and “runs Azazel through” (though his precise strike doesn’t really touch Azzy).

As Favaro’s matador-like theme plays, he unleashes his crafty bounty hunter arsenal of crossbow bolts and smoke bombs, giving the three lads cover to escape, as Charioce reclines in his throne, seemingly unconcerned. 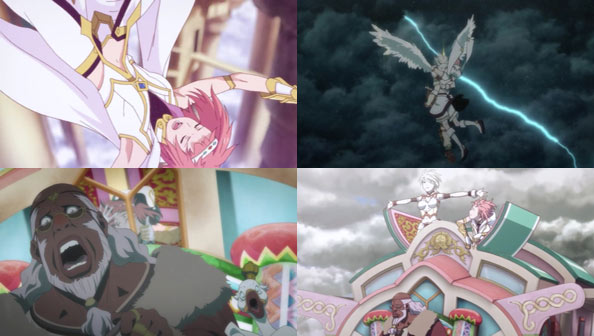 Nina catches up to El in a hovering platform in a very pretty chase through Heaven, but when she tries to pounce on him in mid-air she misses and starts to fall down and through the celestial barrier. Naturally, El descends at top speed to catch her, because he’s still, in her words “Mugaro”, despite having changed “a little bit.”

The two of them are then saved by Bacchus and Hamsa, who called Hippogriff and skedaddled just when Heavenly guards surrounded them. Back to Anatae they go, where El intends not to fight, but to bring peace.

At a very picturesque meeting spot, Rita unites with Kaisar, Rocky, Favaro and Azazel. The latter tries to slink off, claiming “this is as far” as he goes; but Kaisar tells him if they all work together, they can save demons as well as humans and gods from Charioce’s havoc. I loved Rita’s smile when Azzy walks by her, Kaisar’s words having worked. And all it takes is a look to bring Favaro along for the ride.

Not long ago all of the main cast was imprisoned in some way. Now, suddenly, they’re all free (for now) and in strong groups (again, for now). Will the two groups stay apart, or combine to create a force even Charioce will have trouble with? Will Nina’s continued Charioce conflict jeopardize the whole enterprise? Can El succeed without using force (which we know is limited in its scope an duration before he collapses)? We shall see.