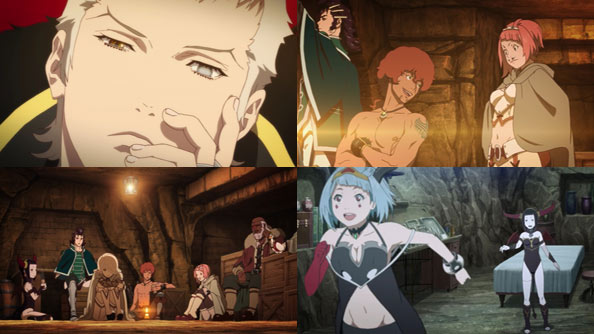 “Kill it on sight,” Charioce says to the Black Knight leader, referring to the red dragon…but is he saying that because that’s what he’s expecting to say, knowing Nina will doubtless put up a good fight? The two sides of Charioce come out again, bringing his roller-coaster romance with Nina to the fore.

Once the whole group is reunited, “gathering intel” is the order of the day. Those of you who were waiting for Rita and Nina to dress up as sexy demons, you got your wish this week. It’s not really that great a disguise, but Nina runs out alone anyway, eager to try it out. 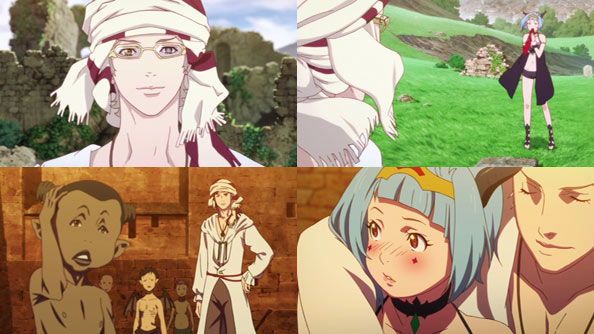 It isn’t long before she runs into the other person in a bad disguise, Charioce, AKA “Chris.” Specifically, he’s visiting the grave of his dead mother (killed by Bahamut’s fire, like Nina’s father).

This, and playing football with the little demon children in the slums, is all meant for Christ to score brownie points with both Nina and us the audience. But for me, those points won’t be easily doled out, and even then are highly provisional. 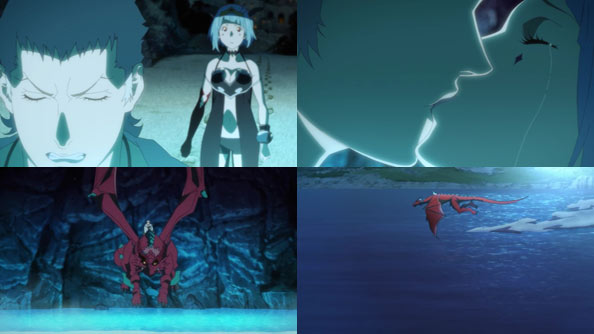 The moment we all knew was coming: when Chris opens up enough that Nina wants to get closer and closer to him until they embrace and eventually kiss for the first time. It’s a very romantic scene (again, if you buy what’s happening, more on that later).

Things get even more Disney-esque when Nina realizes she can now transform into the red dragon at will, perhaps because of Chris’ kiss. She takes him on a moonlit ride over a calm, peaceful Anatae. 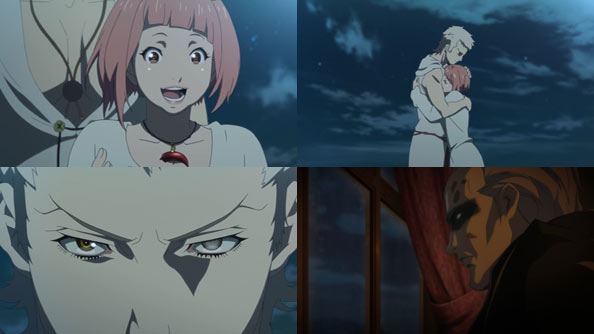 When they land (and Nina finds a robe), Chris gives her a token of his affection: a necklace with a red claw, before sending her on her way, promising the next time they meet he’ll explain more clearly what he’s after. I for one am waiting with baited breath for him to please, for the love of God, explain how all of the monstrous stuff he’s done will be worth it, and how having a dead mom justifies it?

For now, I’ll work with this theory: Charioce is literally two distinct personalities, and becomes the kind and gentle Chris when he is around Nina. We saw his change in expression after she left, so unless he continues to play her, that must be the case. To be redeemed, Chris would have to have no control over the horrific things King Charioce has done.

It’s thin, but another piece of evidence comes post-credits: The Black Knight leader, suspicious of Charioce’s “kill on sight” order, is convinced the king is “under the red dragon’s spell”—the spell that makes him Chris. Considering Nina is, in a way, under his “spell” as well, enabling her to transform at will, it would seem that spell is love, and the only thing holding Charioce back from attaining his goals.

Though even as Chris, it’s clear he still has every intention of carrying through with his plans. So is the Black Knight right, and his king is wavering due to Nina? Or is Charioce in full control after all, fully intending to use Nina, who has well and truly fell for him?

Is Chris real, and can he prevail over Charioce? That is apparently the question on which the fate of many people, demons, and gods now rests.