The first of this week’s two new visitors to Nekoya is a strange one: Gaganpo, a Lizardman and Hero of the Blue Tail Tribe. His visit to the restaurant is preceded by an almost David Attenboroughesque nature documentary, in which a soft-spoken woman narrates everything he does, carefully bathing and suiting up for what is, in his tribe, a great honor.

Upon entering the restaurant, Gaganpo says the “magic words” that get him what he wants: omelette rice, and lots of it. Omelette rice is one of those ultimate comfort foods, and it’s like nothing the marsh-dwelling Lizardmen have ever tasted before and is beyond their ability to replicate.

The fact neither Aletta nor the Chef bat an eye at the presence of the blue behemoth show you that Nekoya is a super-diverse and accepting place. Gaganpo returning home, with three “party-size” omelettes of three distinct varieties for his fellow villagefolk to enjoy, is certainly a sight to see.

The next customer is a little more conventional: Fardania, a wood elf from a village carved into massive trees. But because she’s an elf, she’s also a vegan, so when she enters Nekoya and sees everyone eating animals, she’s a little turned off and very dubious of the human chef’s ability to cook her something she can actually digest, let alone fine tasty.

Of course, this is the nearly omnipotent chef of Nekoya we’re talking about, and it’s not like there are no vegans in human society, so he whips up a delectable tofu steak with veggies and rice at which even a carnivore wouldn’t necessarily turn their nose. Of course, Fardania takes this delicious meal as a challenge to make even better food for her widowed father.

This was an episode that, at times, looked like it was animated by a grade-schooler, as Gaganpo and his cohorts were particularly inconsistent in their design and proportions. Fardania faired better, especially in close-ups. But I was able to mostly overlook the uneven production values thanks to the mouth-watering depiction and description of the food….which is, at the end of the day, what this show is all about. 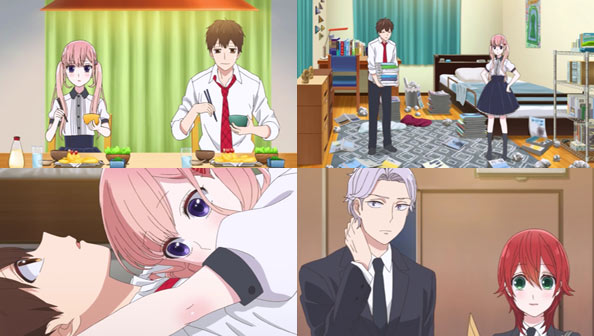 Lilina comes over to Yukari’s for dinner, much to the joy of his giddy parents, who openly talk of how quickly they became intimate. Strange how the imminent threat of cultural extinction changes what is and isn’t proper dinnertime conversation!

Lilina happily help cleans up though, not just because she can’t stand to sit around in squalor, but because the cleanup is an opportunity to dig up some more details on her new BFF Misaki, as well as get more out of Yukari about when he fell in love and how it felt.

Yukari’s pretty good at expressing this, especially how the very scenery in one’s everyday life changed after he fell for her.

Then two suits from “The Ministry of Love” show up to basically ask how the soon-to-be-happy couple is getting on, then giving them a speech about how great the Yukari Law is and how it’s way more precise and less prone to failed pairings than the arrange marriage laws of yore.

And while such a system might be admirable in theory, its complete and total disregard for actual love between non-paired people almost makes the medicine worse than the disease…if the disease weren’t the death of Japan due to no one making babies.

But the spooks say the same things others (including Misaki herself later!) have said, and something on which I agree: Yukari and Lilina do seem to make a good couple. Obviously that came down to the science determining that these two peoples’ personalities would be compatible, and there’s a slight temptation to say “well, what would be so wrong with them just getting married?”

Wellsir, that would be fine except for the fact Yukari loves someone else…and she loves him back. Lilina not only remains totally okay with Yukari kissing Misaki daily, she basically orders him to, not for his sake, but for that of Misaki’s happiness.

When Yukari tells Lilina he thinks it’s “weird” his assigned wife is telling him to kiss another girl, she promptly returns his volley with deadly accuracy: “it’s even weirder that the world forbids you from kissing the person you like.” Amen, sister!

So Yukari has his orders: he’s not to give up so soon, even though he believes Misaki has received her marriage notice. Which is odd, because I thought she already received it, and her assigned husband is Nisaka, and has been keeping it a big secret.

But even her odd little argument with Nisaka that Yukari gets a glimpse of could be anything. It could be Nisaka told her how he feels about Yukari, but Misaki remains firm that he’s her’s. When Yukari works with Misaki after school, he congratulates her, but he’s off base: she didn’t receive her notice.

Another titular lie? If not, why did the suits visit? And was it sheer coincidence such a science-y ministry asked Yukari where Misaki lives? Do they not have Google Maps? In any case, Misaki adds that no matter who was chosen to be her husband, Yukari will be “the only person who’ll ever be special to me,” before leaning in to kiss him. 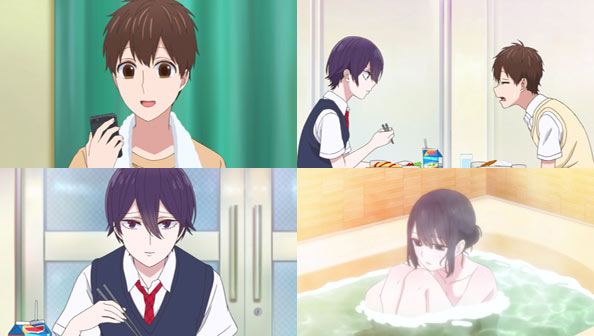 Lilina, it would seem, was right: Misaki isn’t giving up, so neither should Yukari. Lilina doesn’t feel she has adequate skin in the game, and so doesn’t want to be yet another impediment to Real Love in a world that’s already turned against it. That’s noble, but I do hope, as seems to be the case, that she starts to grow closer to Yukari despite that.

For now, she’s still far more focused on Yukari and Misaki, to the point she invites Misaki to their two families’ camping trip, and she says yes. Not sure he’d be able to deal with the stress being in a triangle during the trip, he invites (and eventually bribes) Nisaki to come along too.

And so there you have it: an arranged couple on a camping trip, each bringing along a person in love with Yukari. Should be interesting!