The Gist: Shouta is a 30 year old guy who comes back to his home town to close up after his father dies. While cleaning, he discovers a boy living in a barrel in his family’s udon restaurant.

The boy is obviously a tenuki. Also, Shouta keeps meeting people who are desperate to have his family’s cooking again — it’s even noted in a guide book.

The color pallet is a mixture of washed out and muddy, not very broad, and the highlights are all thick bands of pure white. This makes the characters look something like cut-outs on top of simple backgrounds that are equally uncolorful.

I loved last season’s Amaama to Inazuma for its specific and accurate rendition of children, its delicate pace, and its love of food, friends and family. While Udon no Kuni no Kiniro Kemari has some similarities, the ‘child’s wonder’ feels cheap. Not authentic. The narrative is also sluggish, as opposed to thoughtfully slow. 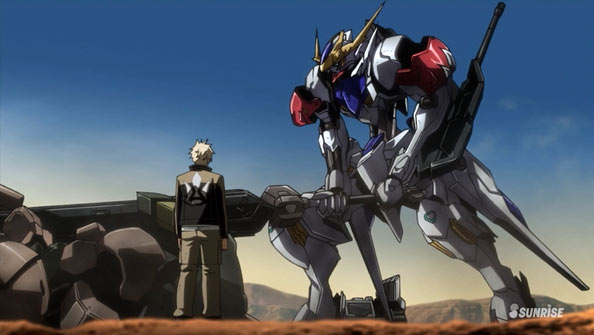 This striking image encapsulates the episode pretty nicely: Hash (or Hush) wants to be able to do what Mika can do, and what what his “older brother” couldn’t do back in the slums. He is at the head of the new recruits who have heard tales of Tekkadan and seek greatness—and purpose—in this new Mars, but haven’t escaped their past. 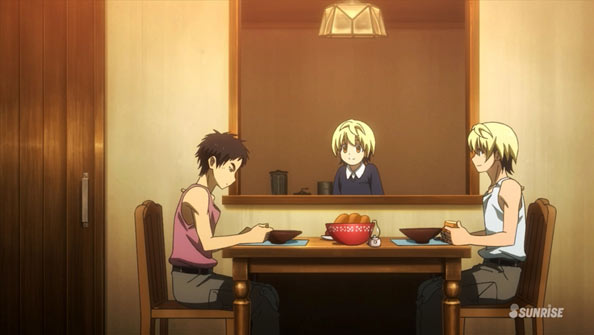 We also check in on Tekkadan’s Earth Branch in Edmonton, where Takaki lives with his sister Fuka and takes her to school. Things are still a little delicate, but Takaki will take all the stability, normalcy, and domesticity he can get. He’s an iron-blooded orphan success story; in a way, he achieved what Biscuit tried to but could not. Now that he has it, he has no qualms about paying it forward.

We jump from a meal on earth to one on Mars, where Hash makes his pitch to Yukinojo: he wants the A-V surgery. “Too old” is the cold reply, along with warmer words from Atra that Hash simply doesn’t want to hear. He’s poised to shove Atra aside, but Mika grabs his arm. And here Hash is: faced with the person he wishes to be more than anything, even at the cost of his life.

Hash seems an over-eager brat in a hurry to die—until we hear his story, and it’s a sad one. His “big bro” Builth went off to CGS looking for glory, but his A-V surgery failed, leaving him paralyzed from the waist down.

Hoping to make the lives of the younger kids like Hash easier, Builth’s actions had the opposite effect, and he took his own life before he could over-burden them too much. But doing so bestowed Hash with a new and potentially deadlier burden: to follow in his footsteps, but succeed where he failed.

Meanwhile, Tekkadan is going to subjugate the Dawn Horizon Corps pirates, Todo reappears (as a Very Irritating Person), and Fareed has sent the Arianrhod Fleet to Mars to join the pirate fight. Aboard is Iok (who seems put out), Julieta (who seems less crazy but no less devoted to Rustal), and…a new Masked Man.

Who the heck is this? Will he ever speak, or does he rely on the pulsing lights on his face to communicate? I’m not quite sure, but Julieta doesn’t trust him. Nor does Orga trust Fareed, but that doesn’t mean they can’t work together, at least for a time, towards a shared goal.

The Gist: We follow Karasuma Chitose, a hungry rookie seiyuu in the anime industry who finds said industry very weird and difficult to navigate smoothly. After a series of bit parts, her older brother and manager Gojou manages to get her a leading role as an “idol seiyuu”, though not altogether intentionally.

I’m not sure if you remember Sore ga Seiyuu! which documented the days in the lives of three seiyuus who got along swimmingly as their careers gradually rose. GN is a lot like that, but without all the edges smoothed off.

There’s a nice bite to this show that gives it a realism and cynicism the other show lacked. It’s less concerned with the process and players and more interested in all the clashing personalities and their various insecurities. 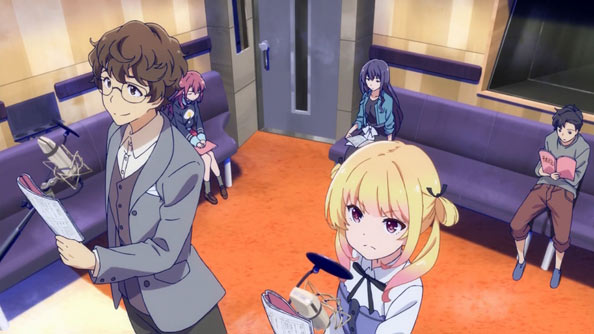 Chitose may be a rookie in this industry, which nearly leads to her ending up having dinner with the author of a light novel, but she’s not a total naïf, nor is she a perfect earnest person.

She, like everyone around her, is full of interesting little flaws, which makes me want to root for her all the more in such a competitive industry, where you never know who’s a friend and who’s just messing with you for their own amusement.

I especially liked the portrayal of the industry higher-ups, who give Chitose a leading role based…on nothing at all, besides gut feeling. The scenes of their glad-handing and boisterous laughter give Chitose’s brother Gojou pause, and he looks very concerned indeed when Chitose accepts the role and joins that chorus of laughing.

She’s so excited by the prospect of making it big, she may not realize she’s being used, and any failure will be blamed on her, marring her career before it had the chance to get off the ground.

Or, maybe she’s well aware of the risks and is going for it anyway.

OR, maybe everything actually will work out the way everyone hopes with no problems at all! After all, Chitose’s seiyuu did voice Mumei in Kabaneri of the Iron Fortress. We’ll see.