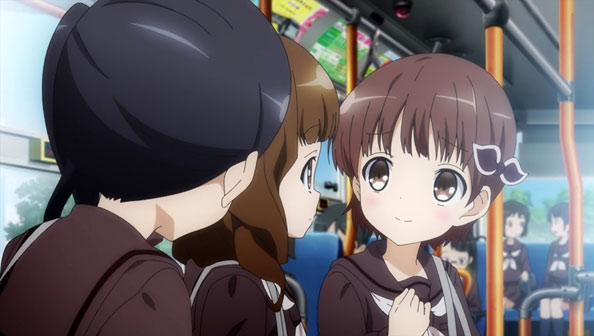 What is it: The story of Himekawa Koyuki, who has loved magical girls since she was a little kid, suddenly being selected to become a real magical girl by the mobile game MagiPro. She immediately set to work helping townsfolk, and the first fellow magical girl she meets in person is her childhood friend Souta, a boy. One day, MagiPro’s mascot Fav announces the number of magical girls in the region will be halved from sixteen to eight.

Why You Should Watch: It’s above-average in terms of general looks and production values, once you get used to its character design, which tends towards the cute. Sure, Koyuki’s almost painfully earnest and naive, but the show seems fully aware of this, and unlike Gakkou Gurashi, doesn’t wait until the end of the episode to drop the hammer down.

It’s right there in the cold open: one magical girl standing over the bloodied corpses of her rivals. Even so, it’s nice to ease into this suddenly miraculous world along with Koyuki, and even though we know she’s doomed, we can still enjoy the little bit of good times she has early on. Her friend Souta’s situation is also an interesting wrinkle.

Why You Shouldn’t Watch: The presence of over sixteen characters, most of which billed as mains, can be intimidating, and also allows for an almost overwhelming helping of moe (each magical girl has their own specific…very specific look). The show owes much to Puella Magi Madoka Magica, and Koyuki owes much to Madoka herself, while the format suggests a marathon/tournament on the scale of Akuma no Riddle or another Lerche series, Danganronpa.

The Verdict: Unlike Touken Ranbu, MagiPro had a hook to it that made me invested in the protagonist and look forward to the next episode. There’s a lot of exposition in both shows, but for some reason it felt more natural and less drawn out here, and the concept was a lot simpler and, more importantly, actually executed well.

Koyuki’s transition is quick, but we feel the same wonder she feels, and the same dread when she sees the ominous word “halved” in the chat room. She’s committed to be a “pure, righteous, and beautiful” magical girl, but she may have to rethink that strategy if she doesn’t want to be a dead one.

The Gist: In a world where Magic manifests as sparkles around really good artists, Aigasaki Kohana is a second year transfer student at Hoshonomori School of Magical Arts, the best School of Magic Arts in, line, the whole world. Also, Kohana’s mom, who died when Kohana was young, was considered one of the best magical arts practitioners.

On Kohana’s first day, she meets the other main characters, who are all male super hotties and the best at their various arts. She even meets the school’s king, who gives her the confidence to finally create sparkles when she does flower arrangement, her chosen art. Unfortunately, when introduced by their homeroom teacher, the King turns on her and… i don’t know? The plot will be about her winning him over I suppose?

You may like MK!R because the art is very lovely, in a static sort of way. The show is naturally calm and pleasant too, with mostly nice characters supporting each other in what apparently will be a ‘who will be prom king and queen’ opening plot ark.

MK!R also has …relatively… well done ENGRISH pop music. It works well enough, maybe even more so because my copy of the episode did not sub title to songs.

You may not like MK!R because it is not well animated. I’m talking about under-count on the frames per second, which makes movement stiff and jerky. The opening narrative is overtly slow, with Kohana meeting her room mate, other characters, and going to home room taking up 99% of the episode’s play length.

The verdict: I think Zane may want to give this a look but, in all honesty, he’d be totally right to drop it. Magic Kyun! Renaissance starts from a very weak position with a dull female lead and generic pretty-boy-idols as love interests and or allies for a summer festival performance I guess??

There isn’t anything at stake. Not even Kohana’s place in the school because she overcomes her weakness IN THE FIRST EPISODE. I am quite happy to not watch or review any more of it this season… 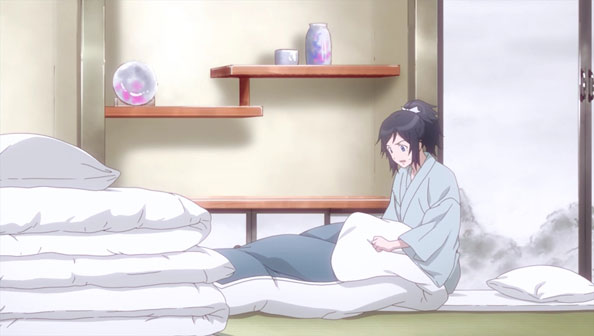 What is it: The story of seventeen swords given human form living together in a citadel. They are charged with annihilating the History Retrograde Army, a group committed to changing history. Rookie Yamatonokami Yasusada is made Captain in his first operation, and his team is wounded without completing their mission.

Why You Should Watch: TRH welcomes you in to what amounts to a big family full of individuals, each with their own quirks. The clash of personalities suggests an easy chemistry, with even some heated moments quickly defused. Congeniality rules, as all these human swords recognize they all share the same objectives: serve their master the Sage…without getting broken.

Why You Shouldn’t Watch: The episode takes some time to get going. After a dark and murky action scene that turns out to be a dream, it spends an inordinate amount of time on a snowball fight that clunkily introduces the cast one by one. 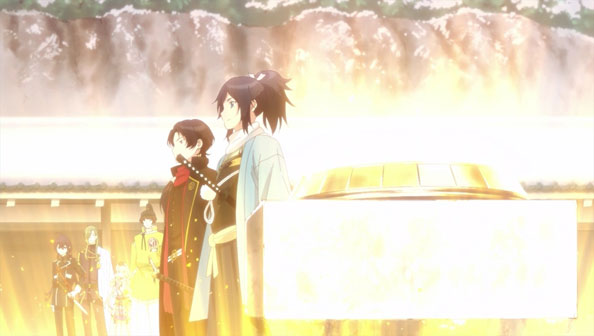 There are also too many characters with complex names to keep track of (17 in all), and not one lady among them. Despite a lot of dialogue being given over to explaining the history-preservation concept, the execution left much to be desired, as the ultimate mission just felt like fighting evil foes in an inn. Simply labeling it as something else doesn’t go far enough to sell the concept.

The Verdict: While not a bad-looking show with a nice underlying family element, TRH just didn’t wow me, or even hook me, in any meaningful way. On paper, human swords being sent on missions to save history sounds intriguing, and future episodes may prove more exciting, but the execution in the crucial first episode was lacking. I doubt I’ll be picking up this show in the long term.

Tekkadan is finally legit, Kudelia is getting shit done from her Mad Men office, and Gjallarhorn has fallen out of favor. Perfect opportunities to introduce new players on all fronts. Tekkadan’s standing is more solid, but there are still tectonic rumblings throughout this episode, which starts out peaceful, even mundane, but becomes progrssively more Gundam-y as the unintended consequences of everyone’s success mount.

Kudelia’s underestimating of a sniveling economic rival mirrors how seemingly innocuous threats could end up a pain in our heroes’ collective rears. Cookie and Cracker are getting a decent education, but they cling to Mika when he even thinks about going back out into danger, something he obviously has to do and will continue to do.

Kudelia and Tekkadan alike gained feisty rivals by showing the world that not all underdog causes are hopeless. Now that McGillis has a seat at the Seven Stars Big Boy Table, he, like Orga in Tekkadan, isn’t going to stop moving forward; it’s the only way for either figure to survive. Only Orga just wants to settle down make an honest living some day. McGillis has big ambitions, which attract both ire and push-back from the families whose toes he’s stepping on.

The world(s) is familiar, as are most of the faces, but it was exciting to see many in new or refined roles. It was also good to see new recruits positioned below, experiencing at the end a measure of the hell of war the main cast went through in their first episode (though these newbies have much nicer bosses.

All of Kudelia’s, Tekkadan’s, and McGillis’ plans to “let it ride” on the gutsy gambles they’ve made are being challenged at every turn by those who want to keep them down in the muck. We’ll see how the new role of the challenged, rather than challenger, fits our scrappy team. 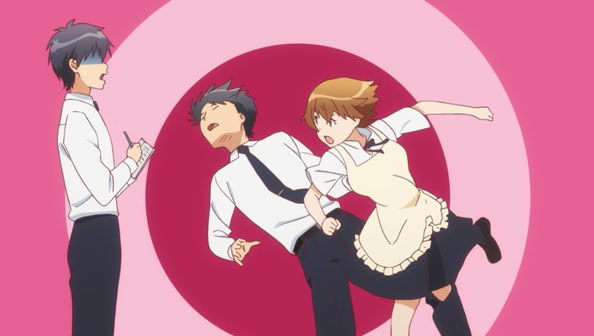 What is it: A spinoff of the popular slice-of-restaurant-life comedy Working!!, with an all-new cast at an all-new branch of Wagnaria. High schooler Higashida Daisuke is forced to get a job at the restaurant when his dad’s business goes bankrupt. Like the previous iterations of the show, his fellow employees are weirdos in one way or another.

Why you should watch: If you enjoyed the previous Working!!s like I did, you’ll enjoy this, and possibly even appreciate the refreshed cast, since we’ve had three seasons of the original cast and there weren’t too many stories to tell. Unlike Servant x Service, the nearly-identical restaurant setting eases our transition into this new show. It’s also packed with star voice talent, from Nakamura Yuuichi to Tomatsu Haruka and Hisaka Yoko.

The comedy style is familiar, with rapid fire jokes and absurd situations and conversations. Each character acts and reacts differently to the bland protagonist, and he and Tomatsu’s Miyakoshi Hana (the unflappable high school floor chief who may not carry a katana but packs a mean punch and makes hallucinogenic chocolates) have an easy instant chemistry.

The cast includes a lazy college student who likes to quiz people on obscure history, a feckless manager who’s terrible at math, and a rich girl who arrives in a Rolls-Royce and tries to solve every problem she encounters with fat stacks of cash (usually successfully).

Why you shouldn’t watch: If you’ve had your fill of Working!!, or just aren’t on board with a new cast, many of whom share traits with the originals, you may not need this spin-off. Animation isn’t any worse than the previous shows, but it’s not any better, either. Like those shows, any serial progress will likely be slow, although this time misanthropy won’t play a huge role, thankfully.

The Verdict: We’re in familiar territory with WWW.Working!!, but there’s more comfort in that than disappointment. All of the new characters are likable right out of the gate, and there’s a lot of potential for both serial development and episodic wackiness going forward. As a low-stakes, low-effort workplace comedy, I rate this show highly watchable, with a good chance of recommendedness.