What is it: A super-sparkly, hyperactive action comedy focusing on a quirky quartet of inmates of the famously impossible-to-break-out-of Nanba Prison, Block 13: Ryugo (15), Uno (11), Nico (25) and Roku (69). They attempt to escape several times a day, but also seem to be fine simply living out their days at Nanba (except Ryugo, who wants to find the man who placed “black shackles” on him. 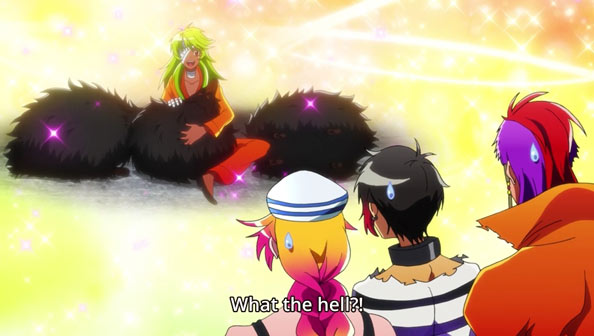 Why You Should Watch: I hate to say it starts off slow, because things move at breakneck speed from the beginning. I guess it’s more accurate to say it takes a while to start laughing at the rapid-fire jokes and physical comedy of the brightly-colored characters and their just-competent-enough corrections officers.

But once I did, I fed off of Nanbaka’s frenetic, bodacious energy and its diverse comedy, which often goes right where I think it will (i.e. the cross-dressing brother) and sometimes goes to hilariously unexpected places (Nico turning guard hounds into lapdogs). 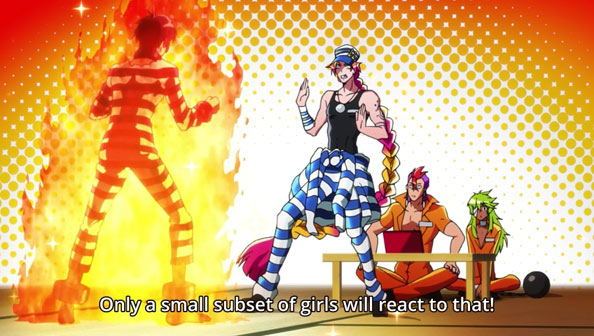 Why You May Not Want To Watch: This can’t match the drabness or manic  darkness of Rainbow or Deadman Wonderland nor the debauchery or even over-the-topness of Prison School. It’s a straight-up comedy with some action sprinkled in, and its one attempt to get deep (with Ryugo’s story) ain’t exactly Lars von Trier. The sole female character is the vaunted Warden who contributes nothing to the comedy. And what the hell is up with all the SPARKLING?!?!

The Verdict: Nanbaka provides occasionally clever or weird comedy, but is usually just slight, self-aware, stupid fun. I thought the four inmates would be annoying at first, but they grew on me fast. And if it keeps showing up on Tuesdays, I may well have time to follow it. If I don’t, maybe Franklin will.

The Gist: demonic creatures are crossing into our reality for reasons unknown, and largely unknown to the public. Luciela Haruka, a blonde woman with a pink hair detail and mega boobs, is investigating for the Anomalous Crimes division — and her investigation has brought her to a small town in Japan!

Local girls Yuma and Matoi work at a 15th century shrine, which quickly gets dragged into things when a painter possessed by a demon goes on a rampage. Fortunately, Yuma finds an ancient scroll while her father (the shrines priest) was trying to impress Luciela, and that scroll may or may not have transformed Matoi into a magic girl.

Also fortunately, Matoi’s dad is the town detective and her mother was most likely a magic girl too, and she makes quick work of the enemy. While she is successful, Matoi is not prepared to be ‘not normal’ and flees to scene… only to become naked in the woods. 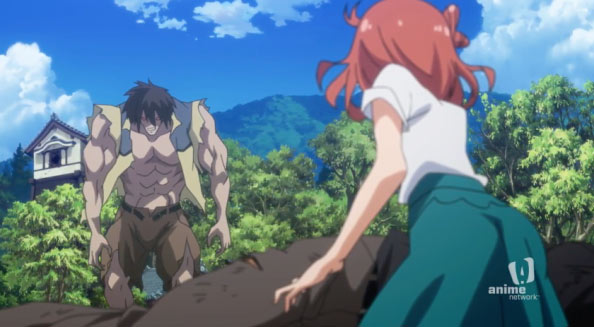 Soushin Shoujo Matoi may be worth a look if you’re up for another magic girl, twisting family backstory, demonic (alien?) invasion story. It has moments of humor, action, slice of life and mystery — even some tween side boob, if that’s your thing.

It mostly looks good. The rendering is weirdly styled, mixing competent but distorted, clunky figures, against richly rendered backgrounds. The color pallete is broad and well structured and the figures, while ‘off‘ looking are shot from many dynamic angles and in strong compositions.

You may not be into Soushin Shoujo Matoi because it’s throwing an awful lot of stuff our way and none of it is especially grounded or set up. Matoi’s freak out at the end of the episode over ‘not being normal’ just comes out of nowhere. Similarly, Yuma’s decision to jump in front of a hulk-rage monster to perform a dance she’s just seen for the first time on a scroll because she’s excited to become a powerful priestess is kinda unbelievable.

And, if you’re a long time RABUJOI reader, you don’t even need to get me started about the Engrish dialog in the opening scene. To be fair, it was actually so appallingly bad, I laughed at it…

Oji’s Verdict: While the opening fight between engrish speaking English soldiers almost turned me off, the good enough visuals, predictable but pleasant narrative twists, and an overall incompetent charm kept me watching all the way through.

I definitely don’t think Soushin Shoujo Matoi is a good show but I also don’t think it’s that bad either. If you have the time, give the first episode a watch.

Nobunaga no Shinobi is, literally, a short format anime about Nobunaga’s 2 young ninjas Chidori and Sukezo. Chidori is a sweet but no nonsense murder machine and I keeping Sukezo’s name wrong. (but he’s really just Chidori’s unrequited love uninterest)

The first episode introduces the various characters and has a few smirk-worthy jokes. The pacing and art are decent but unremarkable, but the lack of content truly makes it hard to rate.

I suspect this show will lean towards the ‘a single 24 episode show diced up into 3 minute chunks and spread across a season’ side of the short format genre. Liking it or not will depend on your patience and/or how well the dialog gets you to chuckle.

While perhaps not as loud or flashy as Kabaneri or Kiznaiver, Kuromukuro was a solid show I looked forward to each week. Unfortunately, after its first cour of thirteen episodes, ending in a cliffhanger, I could no longer find new episodes.

I didn’t fret, because the first cour dropped on Netflix not long after episode 13 aired, meaning it would only be a matter of time before the second, Summer cour would also drop there.

Well, that time has come: Netflix (US) has announced the second half of Kuromukuro will drop on Monday, October 10. As such, I’ll be watching and reviewing the second cour as if it were a Fall show. Stay Tuned.