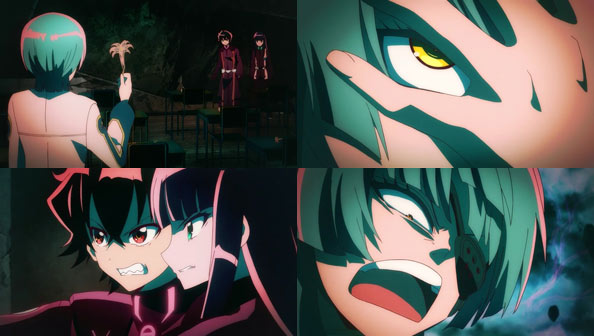 Uhh…that ohagi will have to wait.

Roku and Benio give it their all, but they haven’t seen the true breadth and depth of Yuto’s power until now. He gives Rokuro the choice to join him or die (typical villain offer) and when they don’t cower before him, he actually loses the goofy grin and gets angry. 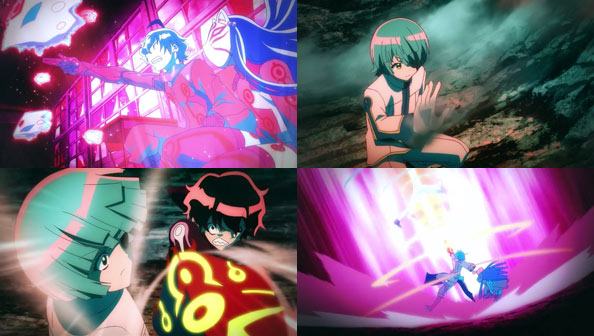 Don’t get me wrong, Yuto’s still a major drag, but at least he’s showing other emotions in the face of his foes’ defiance. But as I suspected, this isn’t a one episode-and-done battle (no way it could be), and as powerful and determined as the Twin Stars have become, they still only had one day to prepare. It just wasn’t enough. Not by a long shot.

Yuto is somewhat surprised by what the duo’s resonance can do, but even their finishing move only causes him to momentarily shed his human skin, revealing his entire body is riddled with Kegare corruption, just like Rokuro’s arm. That’s gotta mess with a guy, which at least explains what a manic, sadistic creep he is.

Once his normal body is back, he separates his two opponents, making sure to get some good devastating putdowns of his sister in before destroying her legs and leaving her to wallow in her weakness and be devoured by some passing Kegare. Rokuro can do nothing, as Yuto puts him in a chokehold.

Except Benio isn’t devoured. Instead, Kamui appears, having been drawn to a “cool battle” he’s sore he wasn’t invited to. He offers Benio one of his trademark 10-second decisions: he’ll give her new Kegare legs to replace her ruined human ones. But it will mean taking on a curse just like Rokuro and her brother, and she might get lost in the chaos.

What breaks her out of becoming totally consumed by her new legs are the cries of her name from Rokuro. When he pulls her out of the darkness and into the light, she realizes why it is she feels so warm and at peace whenever she’s around him: she’s fallen in love with the guy.

That love forges Kegare legs that Kamui admits look the furthest thing from impure, as if the love took the raw Kegare material and made it something beautiful and good. Rokuro laments Benio’s decision right up until she darts around like a lightning bolt and shows everyone what those new legs can do.

Thanks to the wild card Kamui—and Benio coming to grips with her feelings—Rokuro and Benio are still in this thing. But Yuto seems pretty dang pissed his sister was “chosen,” and isn’t just going to lay down and be easily defeated.

P.S. I’ve finally learned how long SnO will be: 50 episodes. That means barring any season-long hiatuses, the show will continue through Fall ’16 and Winter ’17. I’ll be sticking with it to the hopefully-not-bitter end. The extra length bodes well for Rokuro and Benio’s slowly-brewing romance, for which this episode was definitely a landmark.