Don’t let that petulant mug staring down a phone fool you: Arima is in one way or another a hero to many in this episode, which makes us realize he’s been that hero to many all along. 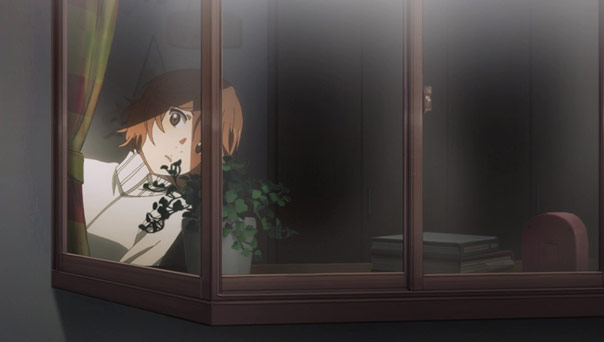 This week is full of optimism in the face of doom. Nobody is moping in the corner feeling sorry for themselves; they’re doing something about it; moving forward to attain what they desire. Yes, even Tsubaki! Her love for and devotion to her next-door-neighbor pianist is driving the career jock to excel at her studies for the first time in her scholastic career, and the hard work and determination look good on her. 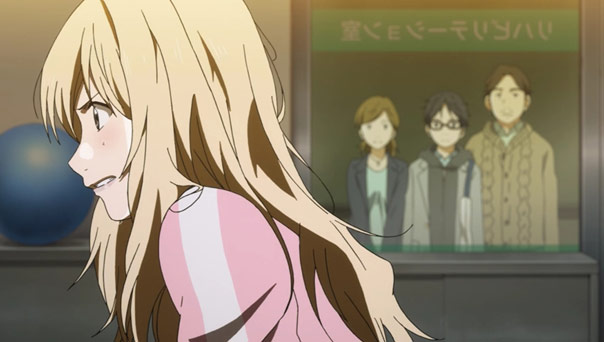 With her negative prognosis and deteriorating frame, Kaori was in an even worse way. But Kousei manages to pay her back for rousing him from his deep sea slumber with his love and devotion, bringing color to her greyed heart and shaking her out of her bed of only-half-joking suicide threats and into the rehabilitation room.

She also asks for a risky surgery that may give her a little more time, because every little bit of time on this earth, with Kousei, will be worth it. Kousei makes her remember how bright and sparkling she was on that stage. Now she’s working to get back on it with him.

I’ll just say both Kousei’s interactions with Kaori’s parents and Kaori’s speech to the surgeon were both tearjerking moments, which I’m enough of a katsudon-eating real man to admit!

Tsubaki still has problems asserting herself within Kousei’s life as an object of romance, but that doesn’t stop her from taking Kashiwagi’s advice and visiting Kousei, both to support him during his fierce all-night practicing for the upcoming compeition (which is, for him, as important as acing final exams).

For all the people he’s able to inspire, including Tsubaki, Kousei remains someone who needs caring for. Tsubaki whips out some scissors and cuts his disheveled hair, something we have to thank her for. And while it doesn’t look much different the next day, the fact that Tsubaki is there, in a way, “marking her man”, is definite progress, which I hope will continue.

When the day of the preliminaries arrive, Kousei is able to disarm both a ravenous Emi and and a post-vomiting Takeshi with delicious free-range egg salad sandwiches, which he happens to have three of. Seeing these three rivals sitting together shooting the breeze is an unexpected delight, and a show of their splendid chemsitry.

Flashbacks show that these three really have a lot of history sitting together, eating, and waiting to see which one of them will be best that day. It was always Kousei before, but his unrelenting competency drove both of his rivals to become the major talents they are today, and did so again by training Takeshi’s sister, provoking him to come out of “retirement.” We also see that Emi always enjoyed sitting beside Kousei. In a show without Kaori or Tsubaki, they’d have made a great pianist power couple themselves. 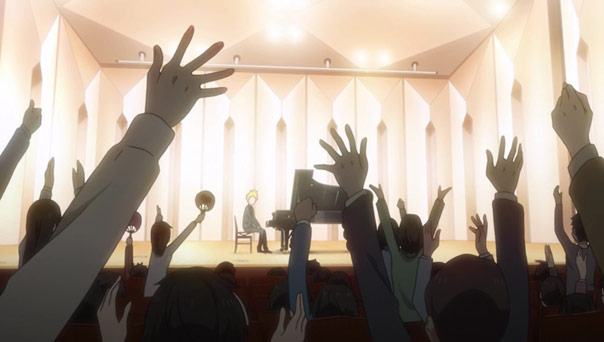 But today, Takeshi takes the first step towards leaving his hero Kousei’s shadow and starting on his own path; beyond replicating or surpassing him is not needing him anymore, like a fledgling finally flying off from the nest. As such, his Chopin performance is so stirring, there were moments when I wished all the various parties watching, along with his internal monologue, would cease so I could listen in peace!

It’s only the first of two pieces Takeshi is scheduled to play in the preliminaries; but Takeshi plays like his life depends on, and ends up “making Chopin smile” along with bringing down the house. He’s back from his self-imposed exile; a musician among musicians; among enemys who are also his friends and his fuel, who fully intend to respond to his brilliant performances with some of their own. I can’t wait to hear ’em.