Back from her DRAGONcation, Ange saw the Arzenal/Libertus “new normal” aboard the Aurora last week, only to learn that Jill wasn’t someone she could count on to accomplish her goals. When she leaves the Aurora with Tusk, Momoka, and Vivian, they’re quickly captured by Ersha, Chris, and Salia, and we travel back to Misurugi, where it all began, and to these girls’ “new normal.” Of course, first the show acts as if Ange was fatally shot, but obviously she’s not dead. 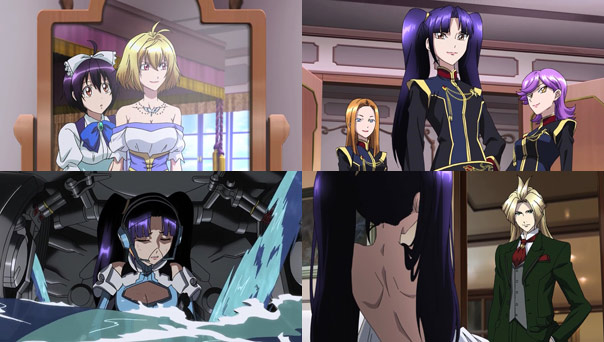 Momoka couldn’t be happier to be back in the capital, dressing and tending to her princess. Ange is looking for escape. She finds it when Salia comes in throwing her weight around; the new captain of the “Order of the DIamond Rose.” (So lame.) Salia explains how Embryo saved her and gave her everything she ever wanted because he loves her. Ange’s response is why she’s not called the Burn Princess for nothing: “You were adrift in the world, and then a new owner picked her up.” 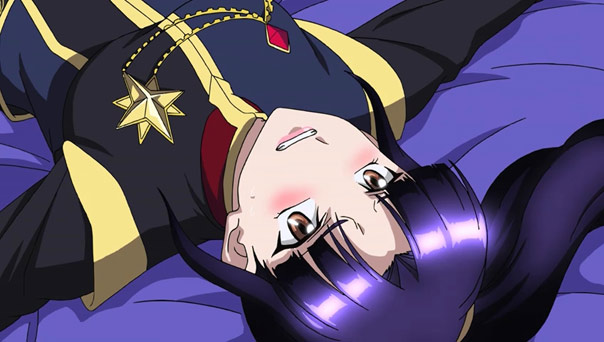 She pokes Salia in her boob with a pen and quickly overpowers both her and her two subordinates, even getting in a dig at Salia’s new uniform, saying the Pretty Salian cosplay suited her better. In terms of physical and psychological dominance, Ange really rules the day in this scene, even if I still have quite a bit of sympathy for poor Salia, who was raised to obey, not dominate. And Embryo did save her from a terrible drowning death. 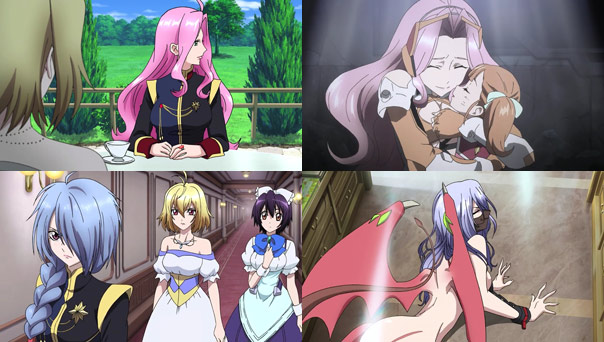 As soon as I saw the little Arzenal orphans running around the palace grounds with Ersha, I knew why she went over to Embryo. He literally brought the little ones back to life and let Ersha bring them to Misurugi to care for them.Ersha has what she’s always wanted: to be able to protect the children, and like a momma grizzly, she’ll show no mercy to anyone who threatens them, even Ange.

Like Salia, Chris was abandoned and left for dead, only to be saved and befriended by Embryo. And all Chris ever wanted was a friend. Embryo even lets Sylvia, who is still very much insane, lead a naked Riza around like a dog and whip her when she brings her the wrong book in the library.

It isn’t until halfway through the episode that Ange comes face to face with Embryo, who immediately gives Salia pause when he asks to be left alone with the princess. Just like Jill, he’s far more interested in Ange, who is the first human in a long time who has interested him more than the characters in his beloved books. That’s another way of saying the likes of Salia don’t interest him. He’s given her everything she wants, but in exchange for her allegiance, and with the understanding that there isn’t anything deep or profound beneath any of it. 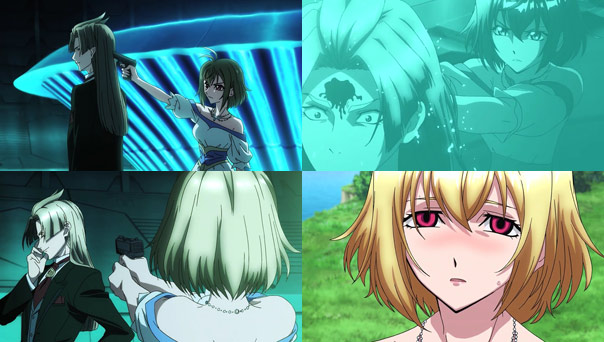 Embryo takes Ange far beneath Misurugi to show her Aura, whose plight she’s already learned from Salako. Ange uses Embryo’s lowered guard to pull a gun on him, but no matter how many times she kills him, he comes right back, like a bishonen Kyuubey. It’s clear this is an enemy unlike any other Ange has faced: one with the powers of a god. A god who “tunes the sound of the world” can’t be defeated with guns.

Embryo turns the tables by putting Ange into some kind of hypnotic trance, telling him all of the love, peace of mind, friendship, trust, and belonging he’s given her former comrades. He offers those same things to Ange, and even gets her to undress before him so he can get a good look at what is to be his prized possession and tool.

Then he kisses her, Ange remembers her true knight Tusk, and snaps right the fuck out of it. Far from being hurt that she’d rebuke him so coldly, the mere fact that she could resist him is, arguably, even more preferable to her easily falling under his spell. Ange is a part of the world Embryo created and should be able to tune her like anyone or anything else…but he can’t.

This golden-haired, fiery-eyed princess is living proof his powers aren’t limitless, a claim that hasn’t been challenged for thousands of years. Perhaps those centuries have made him weary, and this is what he’s been seeking all along; what Salia and even Jill couldn’t provide (as it’s clear from her nightmares she was under his thrall): a human heart and will that can truly resist him. 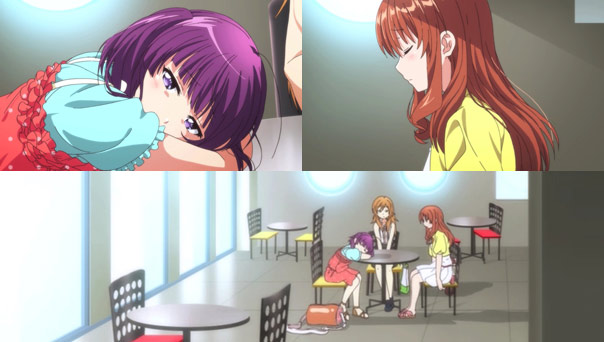 After having a blast compressing a Summer’s worth of activities into one day at Shiina’s estate, this week finds the girls mired in acute Summer Fatigue, a state that would have had more impact if I were watching this in the actual Summer, rather than in the dead of winter with sub-zero winds howling outside my window. 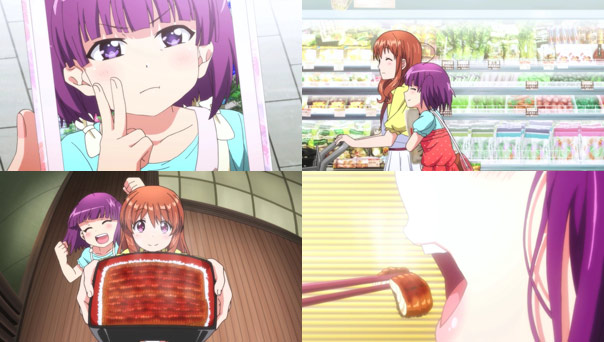 After snapping a rare picture of Kirin with no appetite, Ryou decides that broiled eel is the answer: a tasty meal that will give them the stamina to stand up to Summer. Personally, I’m a huge fan of eel (I usually acquire it in the form of unagi maki rolls) and this dish looked as delectable as ever.

But even after the eel, Kirin still feels like her “body is asking for something” she hasn’t yet eaten. Then the A/C goes out, and they retreat to the bath to wash off their sweat. Kirin then gets the idea to eat ice cream in the bath, which is, as she says, a very luxurious thing to do, like doing anything in the bathtub that isn’t bathing (watching TV, for instance, is pretty fun. Just keep the cord away from the water!)

Yet even that doesn’t hit the spot bothering Kirin. Once out of the bath, she spots a can of sweet beans and Ryou makes her a quick Azuki bean soup with mochi, which turns out to be what her body was asking for. Ryou acts against her better judgement and tries some soup too, and pays for it with a stomachache. There’s no way eel, ice cream, beans and mochi will go well together in any stomach (other than Kirin’s, which seems to be perfectly fine.)

This episode was more about the tastes and textures of food, but the whole sensory experience of cooling off in the Summer, which consists of a variety of specific sights and sounds. The color of the sky, the smell of a mosquito coil, the sound of a wind chime, the waving of a fan; all these little things contribute to the cooling sensation that made non-A/C Summer days and nights not only tolerable, but pleasing.