Nanami and Tomoe weren’t actualy apart that long these last two episodes, but as Nanami remarks, the netherworld had a way of skewing time, making it seem like far more than four days of separation, for her as well as me. Now Tomoe is a yokai again, and in prison. Is it Nanami’s turn to save him?

Well…he asks for space, insisting it’s his decision whether to become her familiar again. And in his yokai form, he’s a bit of a short fuse, so Nanami gives him that space and tries to focus on work as Tomoe sulks in the dark. But in fine dysfunctional courtship form, both of them can think of nothing but the other, as if they had cast spells on one another.

Mizuki tells Tomoe his feelings for Nanami won’t go away just because he’s no longer contracted with her. So what does Tomoe do? Break into her room at night and contract with her, with the customary kiss, and boom, just like that, the Tomoe Yokai Experiment is resolved.

The fact that a contract or lack of same had no effect on his feelings for her has a profound effect on Tomoe. It occurs to him he has fallen for her, but he can’t help but express that fall by yelling, scolding, bullying, and teasing. Matters aren’t helped by the fact that Nanami reiterates her love for him, but knows he’s not interested in her in that way at all. If he wasn’t, things would be much easier. 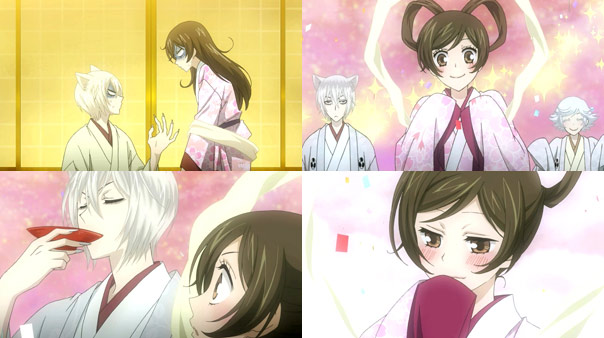 Just when you think he’s realized he’s gone too far and comforts her, he follows it up by trying to strip her! In any case, this is a classic case of someone reflexively taking their romantic frustration out on the very object of their affection.

Tomoe doesn’t like himself in this state anymore than Nanami does. But once the Divine Assembly officially concludes with a big divine party, Tomoe is able to be civil and even debonair as her escort. Then Nanami chases a familiar butterfly that leads her to Mikage.

Nanami’s duties at the diving assembly, which she was performing in Mikage’s stead, involved distributing strings of destiny to and fro with the other gods, deciding who will be matched with whom in the mundane world. What Nanami didn’t know is that a similar string connects her and Tomoe; a pairing facilitated explicitly by Mikage himself.

He knows Tomoe better than anyone else in any dimension. And so Mikage knows—and it has been confirmed time and again to us by Tomoe’s behavior towards Nanami—that Tomoe believes humans to frail and fleeting in their existence to devote his full soul to. He had done so once before with Yukiji, who passed away while he lingered. Human and yokai relationships are taboo because of the vast difference in lifespans.

Mikage brought Nanami to Tomoe to teach him that humans aren’t weak. Nanami was cast away by her family and gone through innumerable hardships, but never gives up, never hesitates to help others, and never fails to flash a big adorable smile when Tomoe is around…and not acting like a dick.

Mikage’s aim was to “rekindle Tomoe’s bond with humanity”, by choosing Nanami, taboo be damned. But while Nanami and Tomoe have yet to figure out how such a thing will work, but the fact he came back to and contracted with her unbidden by anything other than his love for her, proves there’s is no shortage of sparks at the heart of that kindling. 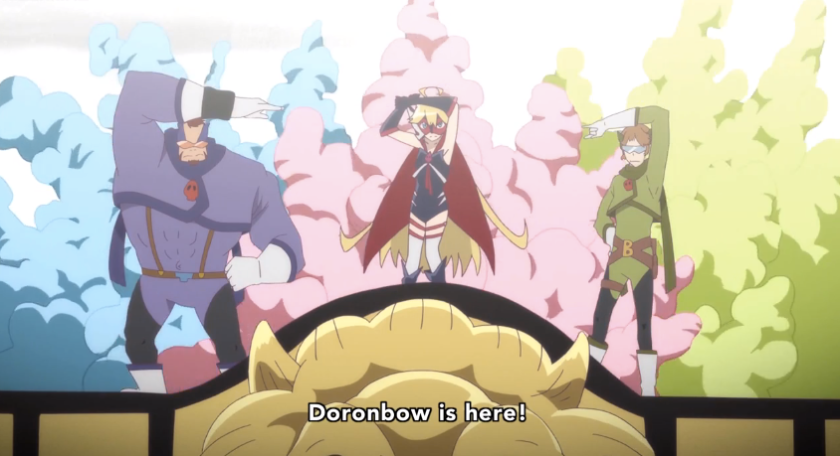 Yoru no Yatterman took some interesting turns this week but, ultimately, has become the Gundam G of the deconstructionist, post-apocalyptic, retro-theme genre. The story lurches incoherently between formulaicly crazy and weirdly mysterious but flat.

It’s all over the place and, because I’m not invested in the original franchise, the simple fight-of-the-week formula isn’t gripping me and I just don’t enjoy watching it anymore. This week introduces Takeshi, who’s super strong, fighting to win comforts for his sick mom, and has a bladder infection or something because he’s constantly peeing everywhere.

I’m sure his peeing ties into earlier Yatterman shows or is a cultural joke or… something, but it felt totally random to me and, after the first time it’s used as a joke, it wasn’t very funny. 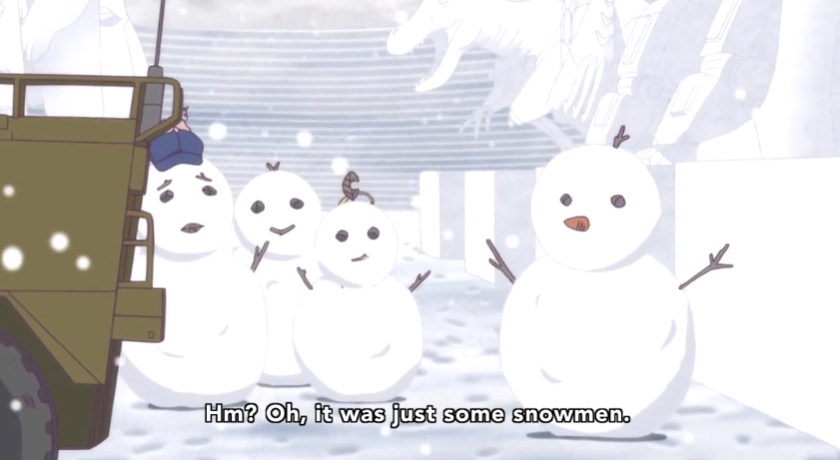 Yes Yatterbot soldiers. It was just some snowmen peeing on that Yatterking statue…

This was actually the funniest moment in the episode. Beyond Takeshi, the first half of the episode is dedicated to Gatchan trying to show strength and get ready for a prize match (against Takeshi). I enjoyed watching Gatchan get all riled up over beating Miss Doronjo into the ground and then losing his confidence immediately because he can’t even defeat Boyaki but… Gatchan is such a dull character to begin with.

Rather, any character development he gains from this is cliche at best. 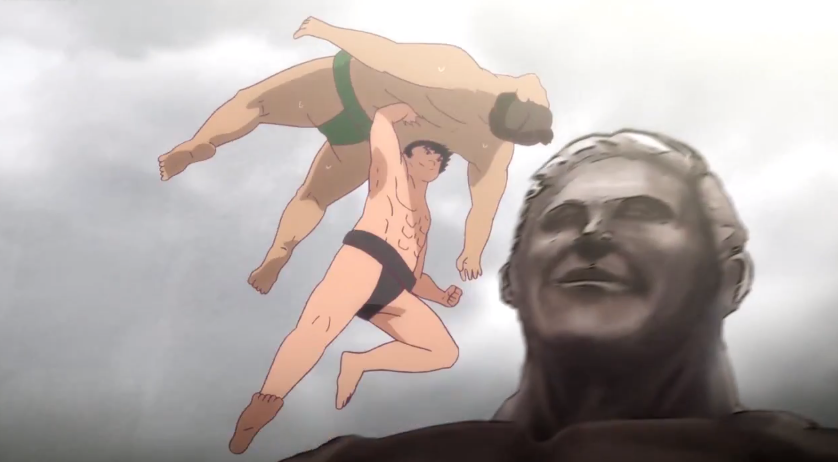 As far as visuals, this week presents another mixed bag. On the up side, we got a decent amount of action in the animation, plenty of characters and mechs designs, and some occasional uses of color.

On the down side, even at 1080p the snowy background washed out many of the opening scenes. Worse, the ‘flash back’ scenes with Doronjo and her mom may as well have been on blank white fields, they were so high contrast. Even if I liked Yatterman’s aesthetic, and I don’t, this wasn’t the show’s best week.

So Yatterman obviously cheats and sends mega-mecha to the fighting tournament and destroys all 3 of the champions instead of giving out a goat each and some pocket money. Nothing new or surprising, given how purely villainous Yatterman has been presented up to now.

Then Doronbo shows up and beats the Yattermen completely for once. They also leave the winnings with Takeshi, who is unconscious but wakes up soon to pee… The mechs fights were especially quirky, especially because they were narrated by ‘the whispering reporter’ who may or may not be a new character or a call back to original Yatterman. He added a level of pun humor that was… weirder than funny.

That all aside, we see another parallel between Ally and Doronjo’s mom (Ally repeats a scene of building snow men from Doronjo’s memory) and I have to wonder where that season long plot arc is going. It was given so little attention though, and it was so blatant a ‘this is an important long-arc’ scene that I didn’t really care.

All these ‘what a twists’ just don’t feel earned.