While wholesomely innocently researching “gals” on the interwebs to learn how to interact with Yame and Ranko better, Junichi comes across an extremely cute gal with a loyal following. This gal’s necklace has the same snake motif as Kashii Yui’s hairpin, so yeah, it’s pretty evident from the start that “Boa-sama” is Yui in disguise.

Yui is always presenting a calm, mature identity at school, but beneath that exterior she’s a vain, arrogant, imperious girl, labeling all of her classmates with various servant’s names and titles. Junichi has always been a loyal “doggy” to her, and isn’t interested in sharing him with some uncultured gal. 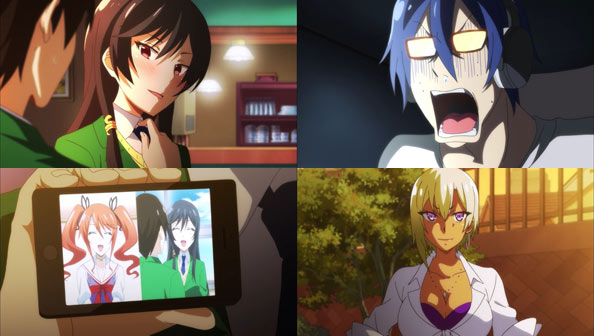 While Yame is hanging out with her galfriends, Yui springs out of the bushes and strikes like the snake she loves wearing, taking an extremely dumb Junichi on a date.

Meanwhile it’s on the tip of Shinpei’s tongue who Boa-sama reminds him of; an increasingly irritated and thus less careful Boa throws him a bone by describing him and his crew of losers to a man.

While secretly recording her flirting with Junichi in the classroom (which is illegal in Japan), Boa-sama gets final visual proof and shares it with the lads, who are shocked by the revelation. Despite Shinpei’s efforts to reveal his discovery in secret, Ranko gets wind of it. 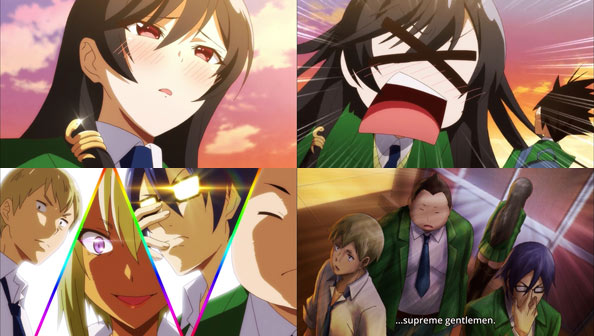 Sensing that being blunt will be best against the painfully dense Junichi, Yui passionately confesses to him on the roof. When he turns her down (as he’s dating Yame), she immediately cracks and her extremely fiery, petulant personality gushes out.

She also plays her trump card: she secretly recorded her date with him (which is illegal in Japan), and orders him to break up with Yame and go out with her, or she’ll send the video to Yame.

That’s checkmate for Junichi…or it would be if he didn’t have a gang of friends watching both his back and Yame’s. Ranko arrives with the three losers, superhero-style (complete with ill-advised high jump off a ledge; Ranko lands as a hero would; the guys eat shit). 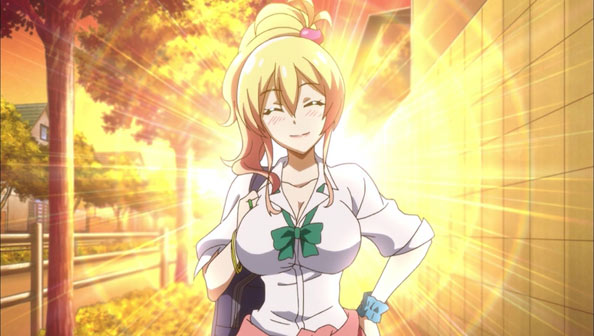 Ranko counters Yui’s Yame-harming blackmail with blackmail of her own: the knowledge that Yui is Boa-sama. Yui surrenders, but she won’t give up so easily, and the war has only begun…just as Junichi’s well-endowed childhood friend prepares to take the stage.

While the lack of any real suspense regarding who Boa-sama was, and Junichi’s general incompetence in everything but being an easy mark for…just about anyone, the episode was buoyed by Taketatsu Ayana’s strong performance voicing the many sides of Yui, and while the lolicon guy still needs to stop talking, the losers, Shinpei in particular, were in top form this week.

As expected, Yukana’s very tan best friend Honjou Ranko inserts herself into her relationship with Junichi by writing him a love letter then mounting him behind the school. After a brief feint, Yukana laughs off Ranko’ actions as just messing around with Junichi…but Ranko seems determined to break them up.

A very predictable development, combined with a lot less comedy (a lot of it recycled jokes that don’t hit as hard, or at all, the third or fourth time around) made for a less-than-stellar Hajimete no Gal.

While out on a shopping trip, Junichi learns more of the challenges of dating a gal, like the need to properly choose which clothes look better on her, or defending her from man-sluts. In both cases, Ranko tries to upstage Junichi, finally meeting him at his house to talk.

She mounts him again, assuring him she’d rather take his virginity then let him get with Yukana, whom she’s secretly in love with. Ranko’s kinda all over the place, and Kitamura Eri does fine voice work, she doesn’t have much to work with here. 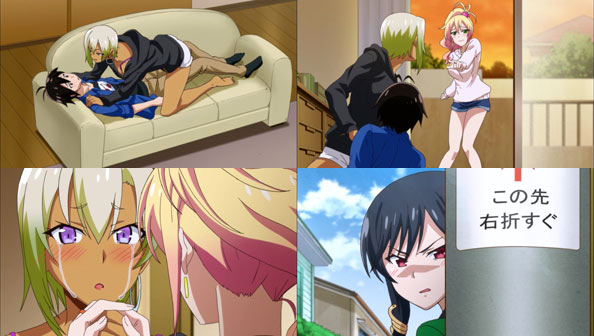 I guess I should be glad Ranko’s not in love with Junichi, but he still gets off the hook way too easily. Indeed, Junichi moves at the speed of a sloth throughout this episode, which I suppose is par for the course considering his self-image as a loser, but it’s still pretty annoying.

This week he did next to nothing—other than halfheartedly trying to tell off the guys hitting on Yukana, which failed—to deserve all the attention he’s getting. Next week it appears will involve more Kashii Yui, who was obviously going to be more than just the Miss Perfect Junichi believes her to be. She looks particularly pissed watching Ranko tease him.

After Yame accepted his request to go out with her, Junichi is in a bit of a daze, not sure whether it’s all a prank or not, considering what he believes to be the logical fallacy of a cute gal dating the likes of him. His loser friends commit to standing by him come what may, only to immediately turn their backs on him when he receives a sexy selfie from Yame. 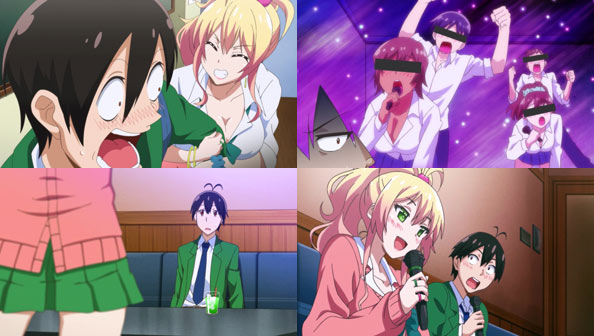 Later that morning, Yame proves she’s not messing around by announcing to the entire class that she’s dating Junichi, then fielding questions. Both Kashii Yui and his “little sister” are dumbfounded. Junichi tries to ask her out to karaoke, but never finds the right opportunity until she asks him out after school to that very thing.

Corrupted by Shinpei’s overblown theory about karaoke parlors (which seems to be confirmed by a sign), Junichi is initially weary of their date, but once he sees how much fun Yame is having, he stops overthinking things and has fun himself. To his surprise, she even knows anime songs; the only kind he can sing.

Junichi tries to kiss Yame, only for her to point out an errant hair sticking out of his nose and excuse herself. Out in the hall, she regains her composure, certain Junichi just tried to kiss her. Far from the easy girl for whom sex is no big deal Shinpei, his friends, and Junichi himself believe her to be, Yame isn’t the kind of girl to even kiss someone so easily. She’s more like Junichi than he presently realizes.

Hopefully he’ll find this out in time, and stop interacting with Yame with misconceptions about who and what she is, just as she seems to be embracing him for who he is, not assigning a silly label. As for Yame’s friend Ranko, it appears we’ll soon learn how she feels about this new boyfriend.