In its first two mini-episodes,  Isekai Quartet is content to let its audience bask in the sheer absurdity and awesomeness of watching characters from four of their favorite Isekai anime bounce off one another in a school setting. Their homeroom teacher, Roswall L. Mathers from Re:Zero, begins with introductions.

Ram notes that Kazuma, who is staring at “Barusu,” is wearing the same bizarre threads we know to be an IRL track suit. Little do both Kazuma and Subaru know that Ains Ooal Gown is also one of them, as is Tanya, but in different forms. I did enjoy Kazuma and Subaru’s reaction to Tanya’s very militaristic group’s introduction. 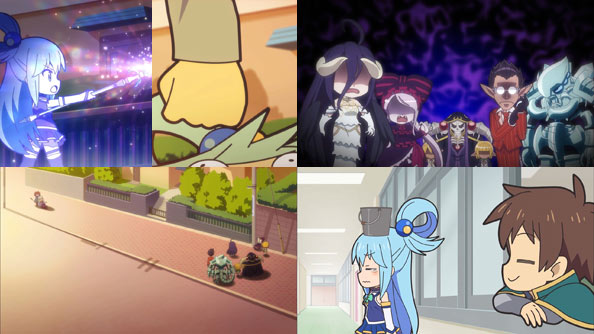 Since both OverLord and KonoSuba feature very similar fantasy races and spells, Aqua takes it upon herself to launch a preemptive attack on the Nazarick crew, since they consist of an undead, a vampire, a demon, and a monster. Momonga even recognizes the name of her spell, which he expects to be low-level, but actually hurts like a bitch.

Even more disconcerting to the guardians and their ruler is that Kazuma is able to simply bop someone as powerful as Aqua on the head and drag her off, scolding her for attacking her classmates. The next day, she has to stand in the hall with three water buckets, an ironic punishment for the water goddess.

While Preston continues to bask in the warm, fuzzy glow of Nagi no Asukara’s finale, let’s talk Black Bullet, shall we? Last week’s episode ended with the implication that Enju had just gotten her ass handed to her (or worse) off-camera, by 98th ranked Tina Sprout. We later learn that Satomi’s power level is 2200% and Enju’s 8600%, but Tina’s is estimated to be 12900%. Not sure what that means, but it sounds impressive; you don’t see percents going into the tens of thousands often enough, if you ask me.

But even if Tina’s power level were One Million percent, the chances of Enju kicking the bucket in the seventh episode were precisely zero. Instead, she’s hospitalized. The third meeting between Seitenshi and Saitake will happen before she’s expected to wake up, so he’ll have to defeat Tina without her. But that doesn’t mean he’s on his own. And he also gets the feeling she’s not killing people on purpose, as if, unlike the general consensus about the Top 100, she still has a soul, and is trying not to fully lose it.

Even though Enju sits this one out, Satomi isn’t alone. Muroto-sensei tells him about the small, nifty “Shenfield” drones Tina uses in concert with remote machine guns to keep her foes at a distance. He makes full use of the Shiba training facilities. And when he finds Tina and goes after her, Miori has his digital back. But even with all this support, Tina is a 12900% handful. She’s also been warned by her master (named Ayn Rand, a very loaded real-world name) that if she keeps not killing people and having emotions or whatever, she can just kill herself.

She’s committed enough that no amount of appealing to her humanity is enough to stop Tina from trying to kill him…but he is able to slow her down and get her to come close enough to stun her with a flash grenade. After that, he rains a proper Vanadium-plated beatdown upon her; that’s what stops her. As thanks for not killing Enju (even if that was actually just a mistake on her part), he spares her. And then she’s shot through the heart…not by Rand—whom we hear no more of the rest of the episode—but by Yasuwaki, the most over-the-top, insufferable, Worst Character Ever.

Of course he’s the one to shoot her, right? Fortunately, Yasuwaki just fires a regular bullet that doesn’t kill her, and Seitenshi stands up Saitake in order to stop him.  She then promotes Satomi, and his first act as Yasuwaki’s superior is to shoot one of his fingers off, which is fine with us! It’s a little tidy that Kisara ends up hiring Tina, but as she says, Tina has nowhere else to go, and Tina is frikkin’ adorable. Ultimately, I like her more as an ally and a friend than as a mortal enemy, and look forward to her future contributions. Sounds like we’ll be getting back to the Gastrea. Yeah…remember those?