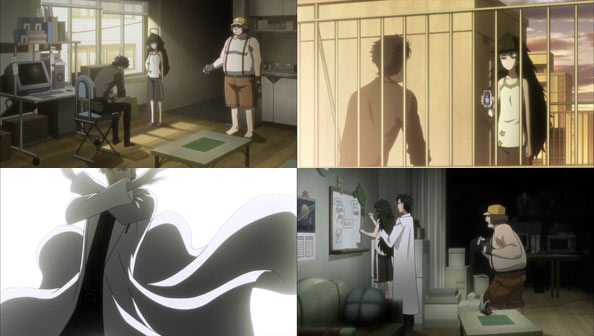 Thankfully, the latest setback does not shatter Hououin Kyouma just as soon as he makes his triumphant return; more importantly it does not rob Rintarou of his will to keep trying. It only forces him to jump back two days into the past and come up with a new plan. But first, they must determine what exactly is causing the convergence; it may not be the time machine itself. 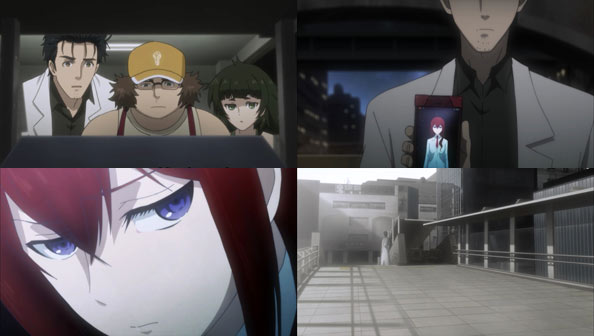 Rintarou works it out with Daru and Maho. They know how to foil both Leskinen/Stratfor and DURPA, which leaves the Russians. When Nakabachi defected to Russia, they made the connection between his research and Kurisu’s. Thus, in order to prevent WWIII from occuring, they have to prevent that connection from being made.

The only way to do that is to eliminate Amadeus and all of the associated data. Without Kurisu’s memories, brain patterns, and research in digital form, Russia will never be able to complete the time machine, the war will be averted, and both Kurisu and Mayuri should be saved.

So the path to Steins;Gate requires yet another Kurisu-related sacrifice. As Amakurisu states more than once, she’s “just a program”, but it’s still unsurprisingly difficult for Rintarou and Maho to even consider deleting “her,” so similar she is to Kurisu, and yet also an individual personality in her own right. 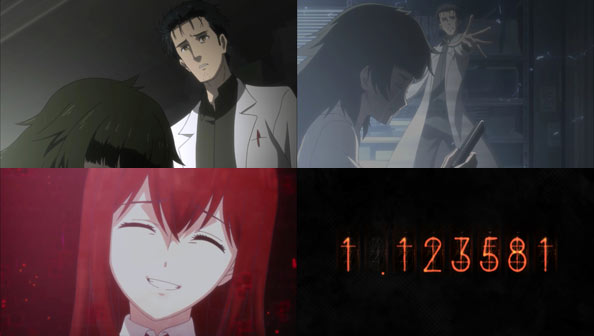 Amakurisu has Maho send her to Rintarou’s phone, and the two enjoy a stroll together, that lasts through the night into the morning, with Rintarou showing her the city she doesn’t know and judges to be beautiful and worth saving.

Unlike her dead human self, Amakurisu live in a world where only things with a purpose exist (much like The Matrix). Her purpose is to cease existing so a better world can be unlocked. Like Kurisu, she’s ready and willing to assume that cost…but also like Kurisu, there’s a hint of sadness behind her reassuring smile.

Thanks to Daru’s improvement of D-Mail, the D-RINE (like the real-world LINE), Daru can send a save message only to himself telling him to break into VCU’s server and destroy the Amadeus AI data. Maho sends the necessary key and patch as an attachment, the Phone Microwave is fired up, and Amakurisu says her goodbyes.

When the sparks stop we end up with the divergence number of 1.123581—the Beta World Line, tantalizingly close to the 1.048596 of Steins Gate, yet not quite there. We’ll see how well Rintarou & Co. fare in the finale, which I suspect might run double-length (since there’s no episode 24). 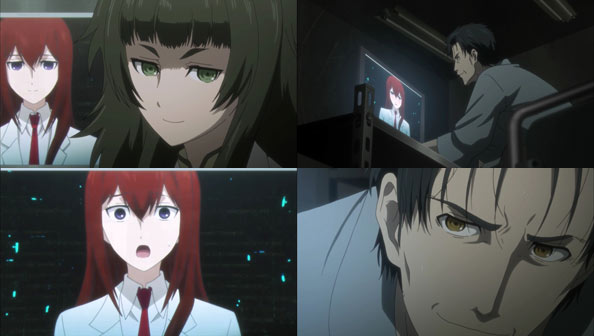 Thanks to Maho’s improvements, the time leap machine can send Rintarou back 336 hours instead of 48. It’s truly a case of Salieri surpassing Mozart. But he’ll still need to make three thousand such jumps to return to 2011 in order to foil Leskinen, Stratfor, and Durpa and get Mayuri and Suzuha safely off in the time machine on the roof.

That’s a lot of jumps, but Rintarou is committed. Nobody in 2036 particularly likes how things turned out (Rukako has bought it, and soon all of them will), so they’re all for him changing the world if he can. The first jump goes well, but it and many many more after it will require that Rintarou wake up after a long coma. 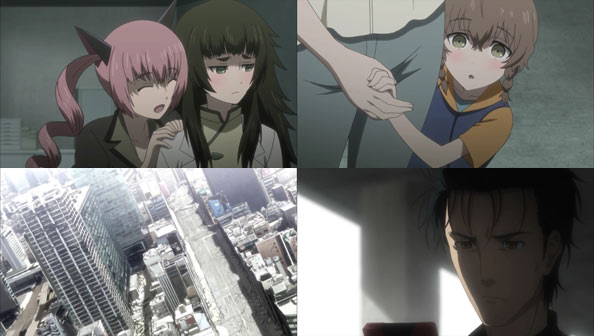 He gets better and better at convincing Amadeus that he’s indeed from the future, and each time, his friends send him on his way. He even gets to see Lil’ Suzuha! Eventually, he reaches the time where two weeks earlier he’ll no longer have Valkyrie HQ to rely on to time leap.

It’s the day he’s captured, tortured, and allegedly killed. However, things go differently this time, as Amakurisu suggests he uninstall her program and ditch all other tech the enemy is using to track him, while all of his friends act as decoys. 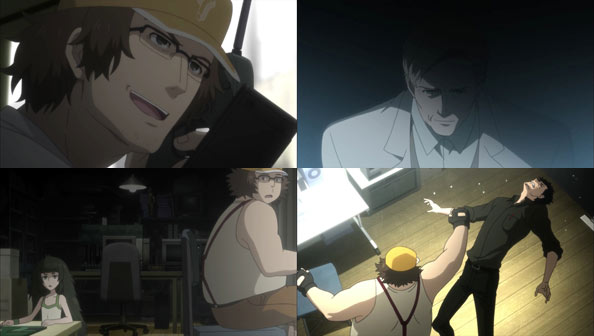 The Leskinen of that time knows he’s lost this round, while the Daru of that time and everyone else sees Rintarou off as he…well, he kinda runs all the way back to 2011. Not sure how that happened, actually, but I’m assuming he didn’t actually run back in time, but managed to escape the enemy and find another means of time leaping.

In any case, when he returns, he’s indistinguishable from the Rintarou of that time, so Maho and Daru think nothing of him showing up in the lab. However, he demands that one of them punch him for being such a whiny little bitch for so long, and Daru does just that. 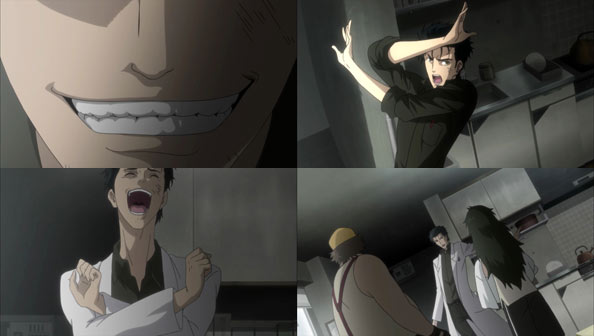 Daru had no way of knowing what his right hook (or whatever; not a boxing expert) would lead to…the Awakening of Hououin Kyouma from a deep slumber. It took twenty and a half episodes, but we finally get to hear that ridiculous mad scientist laugh. It’s a sight for sore ears.

Not ten seconds after awakening, he’s giving Maho a nickname (“loli girl”) and a weird alternate name (“Safina”). He also dubs her Lab Member 009 and calls an all-hands meeting of the other members, who are just as happy as Daru that their Fearless Leader Kyouma is back. 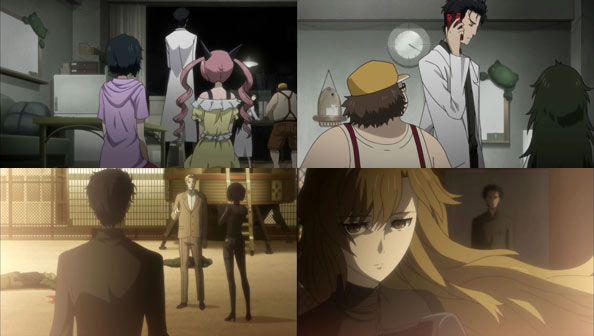 Maho eventually gets it too: this “Kyouma” fellow has charisma, and rather than dragging everyone and the mood down, he’s galvanizing it. And yet, the same old Rintarou dwells within him, it’s just that he’s done running and cowering, and whining. It’s time for ACTION.

After meeting with the lab members, Kyouma talks with Ferdinand Braun downstairs and makes a number of arrangements roughly a half-hour before Akiba became a war zone in the other timelines. This time, the woman in black with the helmet isn’t Kagari, it’s Moeka, who is on Kyouma’s side in this World Line. Talk about an awesome reveal. 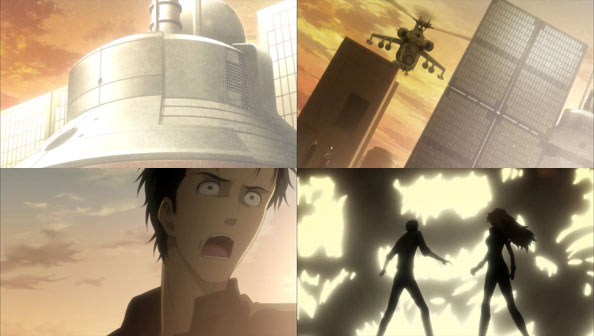 Yep, it sure looks like Hououin Kyouma was the missing variable in the formula to foil Leskinen’s plans and ensure Operation Arclight went off without a hitch. It’s a triumphant, righteous moment. It doesn’t last long.

Even though Mayuri and Suzuha get in the time machine and set off far earlier than previous times, that damned attack helicopter still peeks out from behind a building, launches its missile, and destroys the machine in front of Kyouma and Moeka.

Apparently, not enough conditions were met to avoid the convergence. Clearly it’s not enough to neutralize Kagari and Leskinen; something has to be done about the helicopter. I feel bad for Rintarou having to start all over again right after his grand awakening, but no one ever said changing the world was easy or pleasant.

In response to the shock of the evening’s events that have led to the destruction of the time machine, the recriminations fly between Rintarou, Daru and Maho. All of a sudden, Rintarou demands that Daru and Maho finish the Time Leap Machine so he can go back and try to undo what’s been done.

This leads Maho to admit that, at present, she doesn’t have the know-how to discover the secrets of machine by herself in time (it will only go back about 48 hours). That means having to sacrifice her desired quest to attain the same answers as Kurisu, and instead just be given the answers by Rintarou.

Considering the stakes and the tiny window of time they have to work with, it’s the only choice she could have made, though it sets aside her scientific pursuits and just getting the thing built ASAP, it cements her role as an official Lab Member, working together as a team. 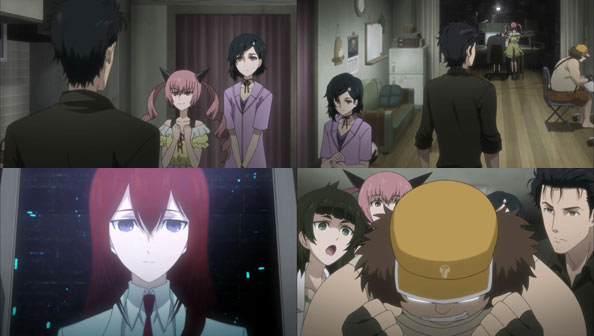 While Rintarou verifys that there were no remains of Mayuri and Suzuha— suggesting they may not be dead—the time leap machine construction proceeds anyway, seeing as how there’s far too much uncertainty about the fate of the two young women to simply sit back and do nothing. (We don’t learn anything more about the nature of Mayuri’s text, or whether it was a D-mail).

Feyris and Ruka do their part keeping the machine-building team fed and refreshed as they work tirelessly for the next 48-odd hours, successfully hacking into CERN and even getting Tennouji to switch on the 42″ CRT downstairs. Rintarou observes that the lab is suddenly a lot “livelier” and more fun than it had been in a long time. It’s just too bad Mayuri isn’t there to see it. 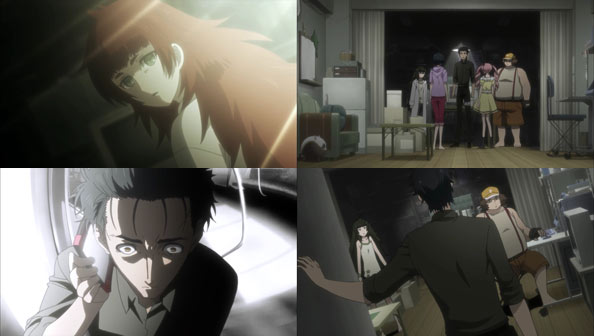 But enough “too bads”; it’s time for action. After waking up and mistaking Maho’s sun-bathed black hair for Kurisu’s red locks, Rintarou gathers the troops, an in a speech (that unfortunately doesn’t devolve into the chuunibyou intensity of Hououin Kyouma), thanks everyone for their hard work, including Amadeus, who blushes when he calls her Kurisu.

With that, the Phone Microwave (Temporary Name) Unit-02 is activated, and Rintarou leaps two about two days before the shit hit the fan (July 7). With so little time having passed since his origin, Rintarou has little trouble convincing Daru and Maho that he is indeed from the future, and they need to get to work deleting Leskinen’s data to preempt his move against them. 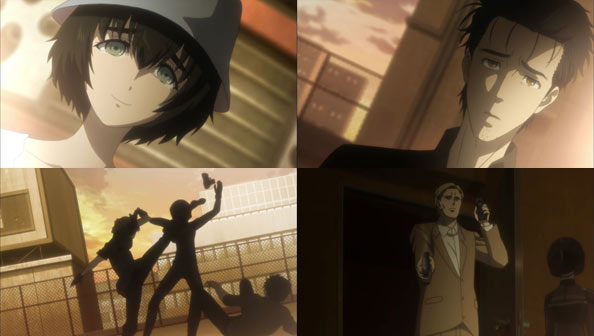 Rintarou also arrives at the rooftop of the Radio building a full hour earlier than “last time”, and rather than getting shot by Suzuha, Mayuri is successful in convincing him not to stop her from carrying out Operation Arclight – going back to August 21st and convincing him not to give up on searching for the Steins Gate.

Unfortunately, Judy Reyes, Kagari, and Leskinen interfere earlier than last time. Suzu and Rintarou are able to subdue Judy (who apparently represents DURPA), but Kagari and Leskinen appear shortly thereafter. Thankfully, this time we don’t have to sit and listen to him explain his plan and laugh like a Bond villain. 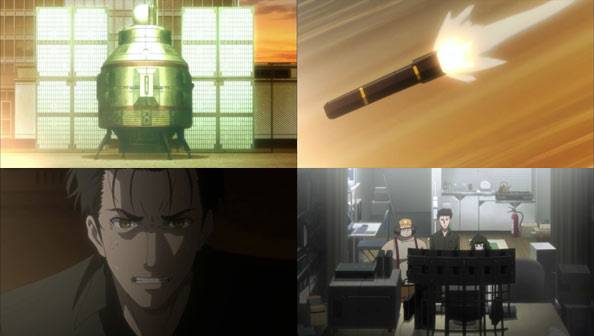 Suzu and Mayuri seal themselves in the Time Machine and it begins to activate…but Leskinen calls his air support to fire a missle at the machine, and Rintarou is right back where he started. His purpose for going back—saving Mayuri, Suzuha, and Kagari—has failed, and he fears that like saving Mayuri in the Alpha World Line, there may be no way to save the time machine in the Beta.

However, there’s no reason he can’t go back to the lab, have Daru and Maho finish the machine, and leap back again—and that’s exactly what he does. s he said in his speech before his first attempt, he’s prepared to fail dozens, hundreds, thousands, even a million times, but he won’t give up as long as he has the means to continue. Maho tells him to tell all her counterparts he meets that she promises to help for as long as it takes.

However, something strange happens after his second attempt: there seems to be a longer delay before he actually leaps, and the screen that displays the date and time for us suddenly stops a July 6 and cracks. That doesn’t bode well for having a third attempt, let alone thousands more…not to mention there are only four episodes remaining.