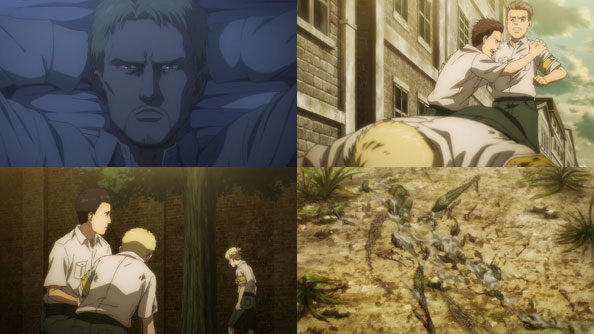 If you like Reiner Braun, you’ll love this episode. If you’re an anime-only watcher wondering where the hell Eren, Mikasa and Armin are, well…you’ll have to settle for flashback cameos for now. When Reiner saw the latest (and possibly last) generation of Titan candidates as his own candidate circle last week, that was a prelude to the episode we get this week, in which the story of his generation of candidates unfolds.

Reiner, Annie, Bertholdt, Pieck, and the Galliard brothers Marcel and Porco make up that previous generation. Back in the day, Reiner was extremely unsure of himself and his talents, much like Falco is in the present, and was bullied by Porco. Marcel kept his bro in check, but Annie is too busy smushing grasshoppers into goo to get involved in the scraps. 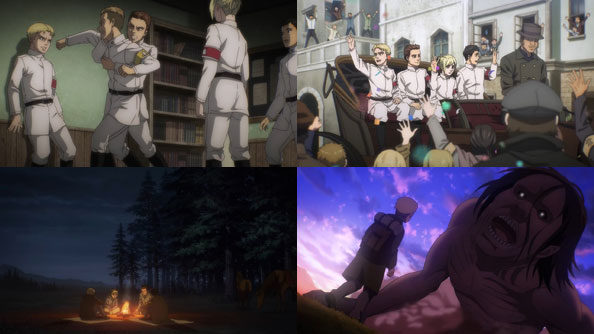 Unlike Falco, Reiner towed the company line without hesitation, and the Marleyan commanders valued his loyalty. To Reiner’s shock and Porco’s outrage, Reiner ends up inheriting the Armored Titan. He and the others (minus Porco) end up in a parade, which he leaves when he spots his Marleyan dad. Unfortunately, his dad wants nothing to do with him.

The new Titan Warriors are sent by Commander Magath to Paradis, and on their first night there, Reiner learns that Marcel set things up so Reiner would get the Armored Titan instead of his brother. Like Falco intends to do with Gabi, Marcel wanted to protect his brother and give him a longer life. That morning the group is ambushed by Ymir, but Marcel saves Reiner at the cost of his own life. 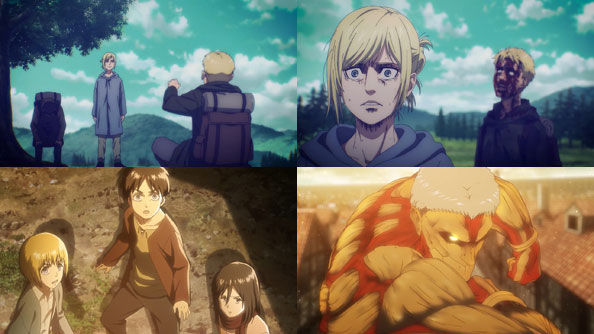 When Reiner stops running later that morning, Annie and Bertholdt eventually catch up with him, and he’s a blubbering wreck. Annie has no time for his cowardice and starts to beat the shit out of him, insisting that their new priority should be to retrieve the Jaw Titan and head home.

As she beats him, Annie says both Marleyans and Eldians are a bunch of lying bastards, so who gives a shit, but Reiner rises like a creepy zombie from behind her and puts her in a chokehold. He insists they continue the mission. If they tried to go home now, they’d be fed to their successors.

After this scuffle, we know what happens: Reiner, Bertholdt, and Annie attack Shiganshima as the events from Titan’s very first episode are repeated from the Titans’ POV. 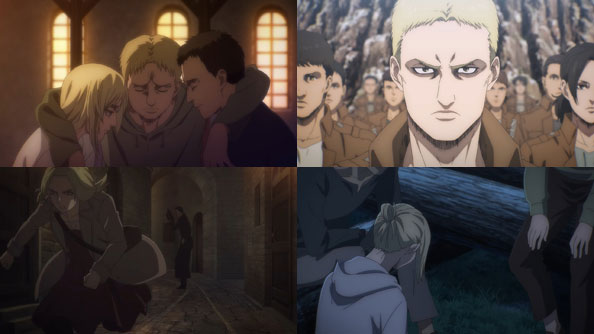 The three mix with the district’s refugees and join the 104th Cadet Corps with Eren & Co. We know that story too. Fast forward five years, and Annie tracks down Kenny Ackerman, but is unable to get any info about the Founding Titan (i.e., Eren) from him, and he doesn’t buy that she’s his long-lost daughter.

Annie wants to head back to Marley, certain that the intel they’ve amassed these five years will be sufficient, but Reiner knows better: They don’t have the Founding Titan, which means their mission isn’t complete, which means they won’t be welcomed back. 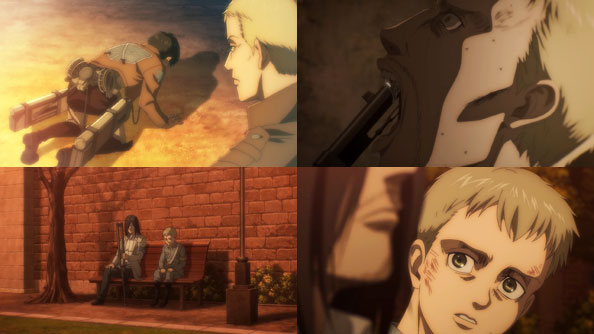 As Reiner’s memories of his undercover mission on Paradis progress, we see watch present-day Reiner prepare to commit suicide by placing a rifle in his mouth. He only hesitates when he overhears Falco, probably the candidate most like him in his candidate days, discussing his problems with one of the wounded veterans at the hospital (who, judging from his black hair and green eyes, could…could be an older Eren in disguise).

Falco could be one of the last Titan warriors, and he needs all the help he can get from those who served before him. Reiner decides he won’t end his life today. His life might be hell right now, but he’s still able to look beyond that hell to, in this case, the hell that awaits Falco and his comrades. If he can stop them from reliving that hell, remaining alive will have been well worth it.