Levi and Mikasa (but mostly Levi) succeeds in disabling the Female Titan to the point he can extract Eren from her mouth, betting everything that he’s still alive as Mikasa insists. That’s obviously good for Eren’s well-being, but part of me still wanted to see exactly where, or who, the Titan was taking him to, and for what purpose (though the fact he can transform like she can is obviously a front-runner for why).

In any case, Eren is unconscious and goo-covered, but alive, as are many other scouts like Armin, Jean, and Sasha. But many are also dead, and they’ve been busy gathering the bodies and preparing them for the journey back behind the wall. This is like the grisly aftermath of the Trost battle, only there isn’t even a victory here with which to say it was worth it.

This was total defeat and failure, and it only gets worse when the bodies are loaded but the wagons can’t outrun Titans (who were led out of the forest and to the formation by two scouts desperate to find their friend’s body). Not only do they re-lose that body, but the soldiers on the wagon have to dump some of the bodies they have—including Petra’s, as Levi sees—in order to outrun the Titans.

It’s one more awful, morbid action people in this show must take in order to keep living, and a Sasha says, only half-believing it herself, being alive is something, right? 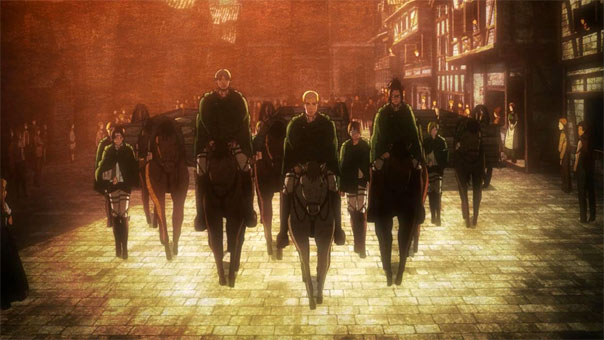 In a manner that’s almost too rubbed in our faces, Eren dreams of the day the Scount Regiment returned, all solemn, defeated, bandaged faces and corpses, and when he got so damned mad at the townsfolk complaining about how the scouts just waste their taxes. When he wakes up, Mikasa is with him but is no comfort when they re-enter the walls to find just as cold and critical a reception, only now they’re the scouts.

Even worse, Eren sees two bright-eyed, bushy-tailed youths watching the scouts’ procession full of excitement and hope. Neither Eren nor Mikasa can even put on fake faces of strength or confidence; they’re merely slack-jawed. That used to be them; now they know why those Scouts looked the way they did.

Finally, because Erwin didn’t actually accomplish anything on their expensive operation, they’re being called to the Capital to answer for his failure, while Eren is being placed back into custody. Things have just about hit rock bottom…but I won’t underestimate this show’s talent for finding still lower depths of despair.