As is standard practice at the end of the year, the three of us are presenting our Top 10 lists for 2015. I’m up first —MagicalChurlSukui

Honorable Mention #2: Parasyte – Winter (7.88) – Far from perfect, especially in its second half, but definitely worth watching for the creepy horror factor 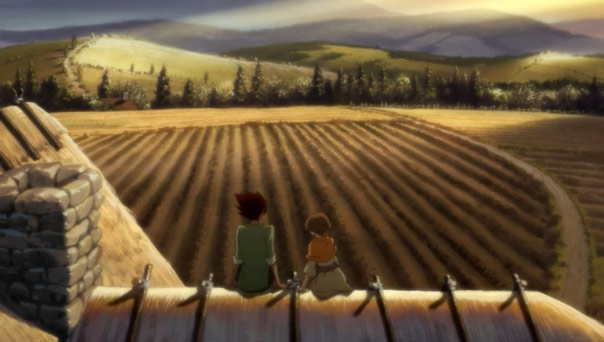 Honorable Mention #1: GARO – Winter (7.88) – Amidst all the yelling, armor-donning and monster-smashing came one of the year’s best and heartbreaking episodes

9. Ushio to Tora – Summer (8.04) – It’s an old story – A Boy and His Youkai – presented in with throwback style and earnestness but a modern, self-deprecating edge – plus a lot of badass girls

8. Kamisama Hajimemashita 2 – Winter (8.17) – One of the most consistently sweet romances of the year, without ever descending into the saccharine 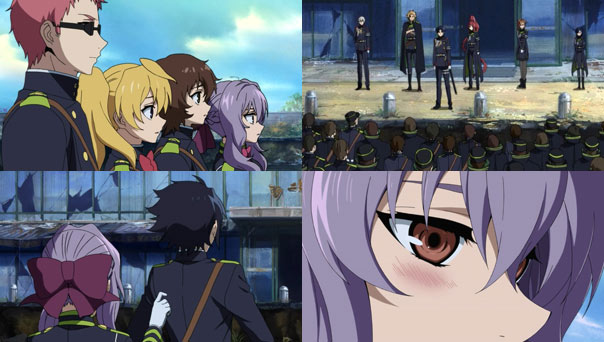 6. Owari no Seraph 2 – Fall (8.33) – The family of demon gear-using soldiers that stays together survives together, along with one vampire who never wanted to be one 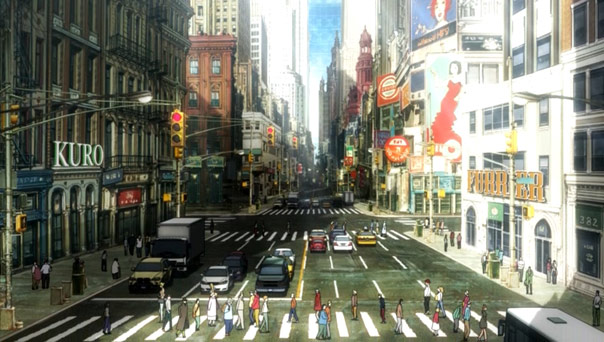 5 (Tie). Kekkai Sensen – Spring (8.36) – One of the weirdest, wildest, and most visually and thematically ambitious show of the year, as is be expected from the creator of Kyousougiga

5 (Tie). Yamada-kun no 7-nin – Spring (8.36) – A surprisingly poignant and complex romp set in a school where seven distinct magical powers are handed down to students who need them 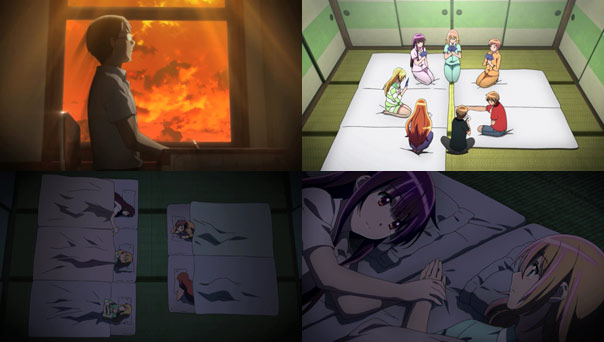 4. Re-Kan! – Spring (8.38) – The biggest surprise success of the year, full of wonderful moments of love and kindness that had me in tears more than once

3. Tokyo Ghoul 2 – Winter (8.67) – A sequel that surpassed its predecessor by further developing its core (and tossing them into depths) while presenting a compelling supporting cast 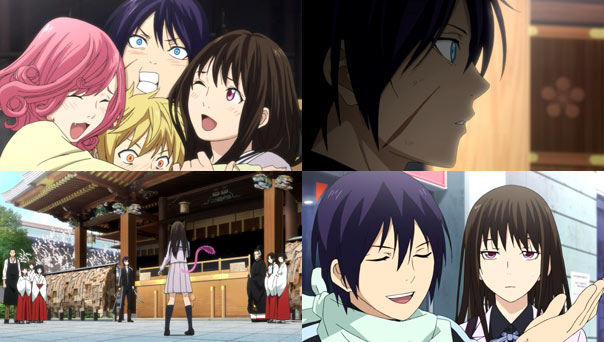 2. Noragami Aragoto – Fall (8.69) – Another sequel better than the original, balancing the growing bond of the core trio while challenging them and their friends with fresher, more complex villains

1. Charlotte – Summer (8.77) – P.A. Works fully redeems itself with a brilliant blend of fantastical superpowers, down-to-earth romance, and an epic scale with heavy stakes 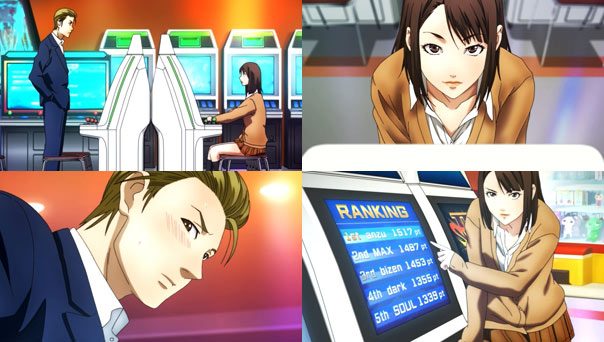 It’s been interesting to watch the deterioration of Kiyoshi and Shingo’s relationship over the last seven weeks, but to Prison School’s credit, Shingo is not always just the bad guy. Or at least, there’s more to him than simply his feud with Kiyoshi, as nicely demonstrated this week when he’s released into the wild by Meiko. He meets the bold, lovely Anzu in an arcade, who says she’ll take him on anytime; in video games, but also, perhaps, more than that.

Among the inmates who aren’t Kiyoshi, Shingo is definitely the most “normal”, and there’s nothing normal about being in prison school for two months, so it stands to reason he’d do anything even for fleeting instances of freedom and normal life. Meiko knows that, and milks him for all he’s worth. When Shingo presents the missing sword from Gakuto’s figurine (which no one else knows about except Kiyoshi), which he found on the bathroom floor, Meiko does some googling and snooping and not only finds the figuring in the bathroom closet, but deduces it must be Gakuto’s—or “Dirty Four-Eyes.” 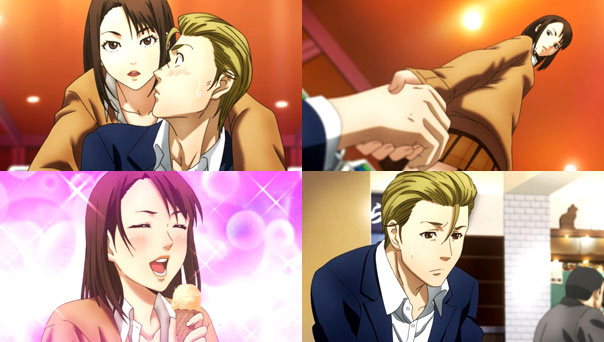 For his quite accidental informing, Shingo gets another few hours on the outside, and his flirtation with Anzu continues, from her playing video games over his shoulder to sharing their ice cream cones to her offering to take him to go see The Grapes of Wrath. The two have nice chemistry, and feel very natural and normal together. While I wouldn’t want this to be the whole show, it is nice to see Prison School successfully playing the romantic slice-of-life straight, without any ecchi mayhem.

Of course, it almost seems to make up for that normalcy by having Mari and Meiko unveil their suspicions about Gakuto in the strangest, meanest, wrongest way possible, offering one snack kernel for each inmate, but putting the missing sword in Gakuto’s hand and testing his reaction.

When he doesn’t bite (even when she places the figuring in her cleavage),  she mounts the horse it came with, threatening to crush it with her ample frame. Gakuto scoops it from beneath her, but before Mari can finish her judgment, he smashes it against the ground all by himself, declaring he’s not into those kinds of things.

Just like that, Gakuto’s seven years of life go up in tiny shards of plastic. But he did it so he wouldn’t waste his entire life putting trinkets ahead of his hard-won friendships. He also apologizes for shunning Kiyoshi. I daresay it’s one of the most honorable moments from Gakuto not involving soiling himself.

As for Meiko, her little scheme backfired, and Shingo blurts out where the sword Mari touched came from (the boy’s bathroom), causing Mari to faint from shock, then to shun a Meiko who desperately wants to be whipped, in a very clever ecchi Twister game of tea time.

Mari’s punishment for Meiko is to wear a skirt and shirt that cover her breasts and panties, but which prove so unbearably restrictive, Meiko almost faints in the hallway. Chiyo is there to help her, and by hanging around the council office, she’s able to learn for the first time about her sister’s DTO operation, which she surely takes exception to, as she’s one, like Anzu, who don’t mind boys at the school.

Mari’s “final phase” of the plan to expel the boys, seems to involve Andre, who they know is a masochist who keeps a “slave diary” (with some very nice illustrations in it, I must add!), but also notable this week is that all the inmates other than Shingo have now forgiven Kiyoshi, and also forgive Gakuto after he smashed his figurine.

Now it’s not Kiyoshi on an island, but Shingo. Would he still be so eager to continue help Meiko if he knew it was in service of getting the boys—including him—expelled? Certainly, being able to hang out with Anzu certainly makes it easier, but if he’s expelled, they won’t go to the same school anymore. Quite the quandary.