Sakurako-san holds back from revealing more about it’s titular character’s central mystery, while hinting at some similar themes that drove whatever it was that happened. The wonderful Yuriko returns, who bumps into Saku and Shou at the pastry shop and solicits the detective’s help in determining which painting her departed grandmother would have chosen to give her on the occasion of her wedding. Note that Yuriko isn’t actually getting married (though let’s not forget that Saku is technically betrothed).

What follows is a wonderful train of thought as Sakurako explains the choices she made based on the information she knows. Her best bet for Yuriko is a painting of Kamuishu Island, which means “God-Grandmother” in Ainu. Sakurako refers to the story that the island is actually the remains of a grandmother who collapsed looking for her lost grandson. Her body gave out, but her spirit never will.

Sakurako believes it’s best because it reflects Yuriko’s grandmother’s desire to always watch over her with love, while dismissing the whole painting enterprise as “pointless sentimentalism” she claims not to understand. Shoutarou chastens her after a fashion, telling her some things have value because they are pointless.

That’s a remark that Sakurako is able to return to Shoutarou, when the young lad pays her a visit on a rainy day with the gift of several flavors of his favorite brand of pudding, embarrassed both Saku and her Gran laugh at the oversized clothes he has to borrow to dry off, but well aware of Saku’s well-honed sweet tooth. 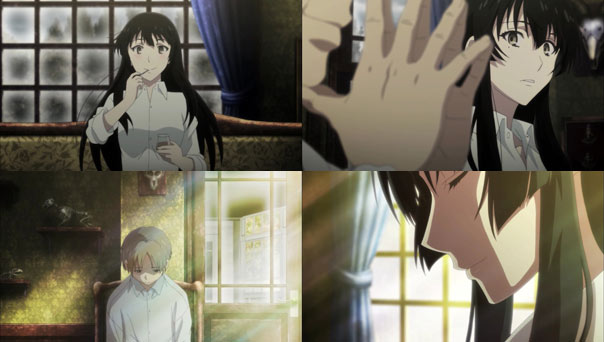 Like Yuriko’s story, Shou reminices about his grandmother, who in his case was dying of bone cancer. He recalls coming to visit her in the hospital, and how she’d always ask him to pick up pudding beforehand, which perplexes him, because she never liked the stuff before. But Saku’s Gran figures it out even before Saku. No surprise there, since her life experience more closely matches Shou’s gran.

While Yuriko’s mystery involved which painting would bring her closer to her gran, Shou’s mystery of why her gran wanted pudding for their visits is solved by taking both what is known about the subject and what one’s own wisdom and experience provides. Gran and Saku settle on the notion that Shou’s gran asked him to buy pudding because it would allow her painkiller injection time to kick in before he arrived.

Just as Yuriko’s happiness was her gran’s happiness, so too was Shou’s. Shou’s gran left this world on her own terms, spending time with someone she loved. Shou can’t initially fathom how his presence at his grandmother’s bed did any good or had any point, until Saku repeats his line about pointless things having their own value.

Saku’s detective skills can’t help but notice her own gran’s back is ailing, and tells her they’re going to the hospital. But that ain’t happening; her gran, like all the other grans before her, aren’t going to be pushed around by youngins. Speaking of gran, she seems to be aware of Saku’s deep dark secret, and the significance of Shou’s name.

As for Sakurako, she seems to have gotten quite a bit of something pointless yet valuable from Shoutarou, but makes mention of bringing it all to an end, which this show has to do soon. The “cold ending”, if you will, does not do much to clear up her mystery, as we watch a girl who looks similar to Saku but whose name is Hitoe tighten up her boots and head out as her parents loudly argue about her, and she looks at the moon and momentarily grows butterfly wings as she tells her “sensei” she’ll “fly up to him.”

I have no earthly idea what any of this is about, only wild speculation, but as usual, I’m interested to learn the truth. 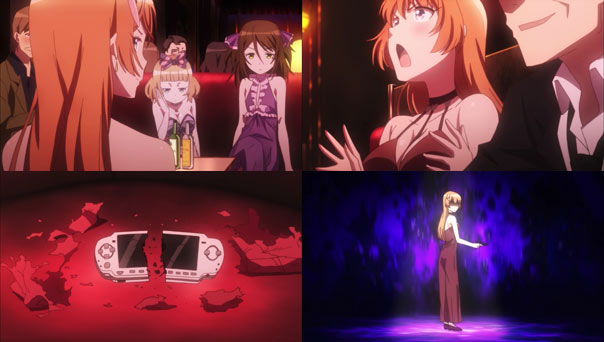 Wow, it’s like Hannah has some kind of sixth (or 35th!) sense, because she handed this episode off to me, predicting it would be more up my alley. Oh wait, the episode is called “Crazy Summer Time”…so that’s why…

Anyway, I’m glad to fill in for Han, who is still recovering from Titan overdose. And you know what? As “crazy summer time” episodes go, this wasn’t awful. Sure, boob sizes are compared and protagonists are licked by more than one girl, but the episode manages to keep things light, breezy, and humorous.

It also manages to differentiate between the characters, as Usagi and Mari are totally capable of posing as dates at a gentleman’s club, but Ootori…isn’t, and exhibits an itchy trigger finger when someone tries to scratch a nonexistent itch on her ass. Yes, it’s “specialty” jobs like this where Ootori doesn’t do so well.

Despite her prematurely blowing everyone’s cover, they do retrieve the magic artifact they were looking for, and decide to investigate it for bonus points (and to mitigate Ootori’s penalty). When the ring accidentally falls right onto Takeru’s finger (like Frodo and the Ring!) he figures out pretty fast what the ring does: make all the girls around him drunk.

Besides being a pretty harsh endictment on the slimeball guy who wielded this ring before, it also gives us the unsolicited opportunity to observe what kind of drunks the girls are: Usagi is a giddy drunk; Mari is a sad drunk, Ootori is a wild drunk, and Suginami is a sick drunk (sick as in vomit). Even Lapis gets a little hiccup in. 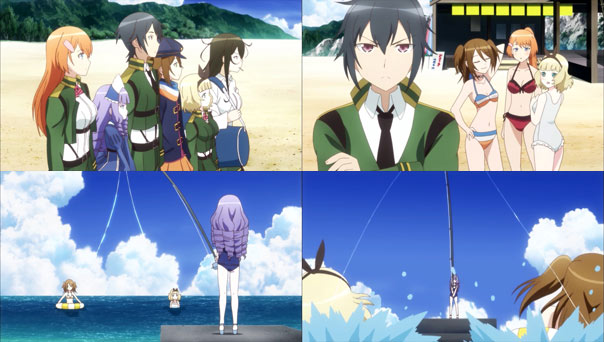 Let’s move on—because the episode sure does! This is really two half episodes, which is just as well…neither of these stories could occupy a full one. The second half involves an “endless Summer” possibly being perpetrated by a magic monster of some kind. While it’s a rather obvious excuse to get the girls in swimsuits, said swimsuits are actually quite reasonable in design. It is troubling that Lapis and her school number steals the show for Takeru. The clear winner of the “competition” is Ootori.

Yet even here, the personalities of the platoon shine through. Just as they handle being at a club or being drunk in different ways, they treat summer differently. Mari and Usagi are all about having the fun with the water and the splashing, but Suginami hates the Summer and the sun (makes sense given her clinical upbringing), while poor Ootori can’t swim (like Kirin in Asterisk).

As for Takeru, he doesn’t act like a buffoon, but he does eat some off shaved ice, which I didn’t even know was a thing. As such, Usagi, Mari, and Lapis form a “Mini 35th” to take care of the pervy sea monster. Sure, Takeru comes in to help out, but in his heavy armor he’s pretty useless; it’s Lapis transforming into an industrial-grade fishing rod that allow them to hook the sucker and claim victory.

Ootori, knowing that both at the club and on the beach she wasn’t able to contribute that much, rewards the Mini 35th with the last three ice creams. Nothing death-defying or groundbreaking going on here; just good harmless platoon bonding and some ever-so-slightly above average comedy.

Eren’s first big mission as a newly-minted member of the Scout Regiment is…cleaning a dusty old castle that once served as the Regiment’s HQ. It’s not glamorous, but it is a good opportunity for him to meet his new comrades, among them Petra, Oulo, Eld, and other people with funny names.

But despite those funny names, they’re all elite soldiers with dozens of Titan kills and perhaps hundreds of assists between them. Whatever his status is here (and it’s not high), he intends to soak up as much as he can from these veterans of his calling.

After dinner, those veterans clear out when Eren shows curiosity in Hange Zoe’s activities experimenting on Titans. Hange ends up talking to Eren the entire night before she’s to perform some tests on him to get a better idea of what the regiment has to work with. She also proves to be the most knowledgeable person on the Titans either he or we have yet encountered.

Not only that, Hange is a very odd duck in a regiment full of ’em, but there’s a method to her madness. As she tells Eren, she enlisted and was once driven solely by hatred for humanity’s “mortal enemy,” but the closer she got to the Titans, and the more she learned about them, the more the hate faded and the desire to learn still more grew. They may be a voracious plague on mankind, but that doesn’t change the fact that Titans are inscrutable, wondrous creatures.

Part of that wonder is derived from the fact that Titans are so light for their size, which makes Hange consider the possibility that they way humans perceive Titans and the way Titans really are may be two completely different things. The show has been so extremely stingy with solid info on the Titans, so theories of this nature burnish their mystique.

Fear and rage haven’t gotten humans far, so she has always strove to study them from a different perspective, and with that has come an ungrudging admiration of and affection for her “subjects”. I never thought Titans could be portrayed with something like compassion, but Hange’s interaction with them does just that. 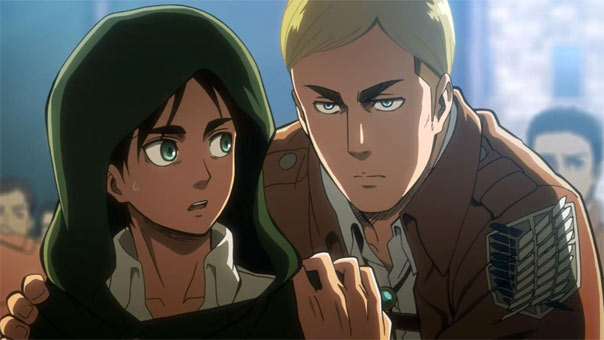 So when, the morning after the whole night she talked Eren’s ear off, those subjects, named Sonny and Bean, are discovered having been murdered, she’s genuinely devastated and flips out. Meanwhile, Erwin seems to have a plan that diverges from the “company line”, which Mike has sniffed out. No doubt Eren is integral to that plan, whatever it consists of.

Eren has learned in no time at all that he’s in a strange place full of intrigue among strange people who want to use him for one reason or another. He’s passed the Don’t-Get-Eaten-By-A-Titan Test, but surviving in a swirling sea of eccentric, erratic, and ambitious personalities is a whole new ballgame.