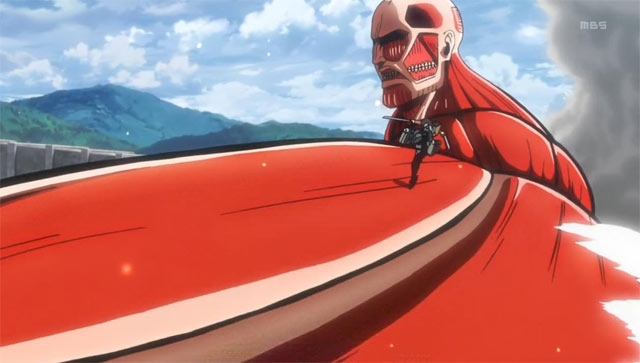 When Eren ends up all alone with the Colossal Titan, he wastes no time attacking it, using his ODM gear to climb all over his body and delivering a blow to the back of his neck as he was trained to do. But Eren doesn’t have his revenge today; the Titan merely disappeared as mysteriously as he’s twice appeared. Just a couple of footprints where the enemy once was. And he’ll surely be back whenever he feels like it.  There’s no resolution, no catharsis…no glorious victory. 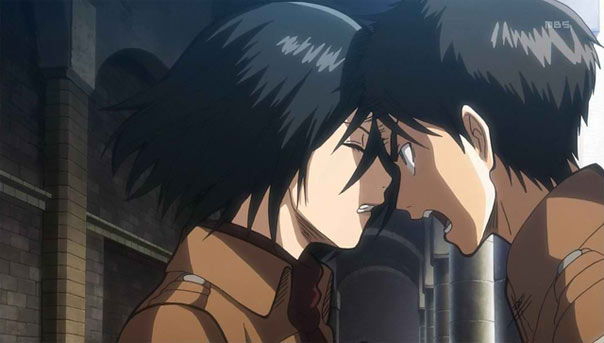 Now in the heat of battle, Eren is the only one among his contemporaries who seems to have his shit together, and that’s because, as his instructor noted, he’s never seen anyone work with as much purpose as Eren. He’s singularly motivated to defeat the Titans, and hard-headed enough to let that drive drown out his nerves, if only partially and temporarily.

He tries with all his might to relay to those around him the importance of forgetting about what they have at stake and focusing on their immediate duties. Armin and Mikasa are brighter than Eren, but those extra smarts put them at a disadvantage here. They waver; they overthink. Eren has to headbutt Mikasa to snap her out of her feedback loop. “You’ll be fine. We’re all going to make it. Now get your ass moving.” 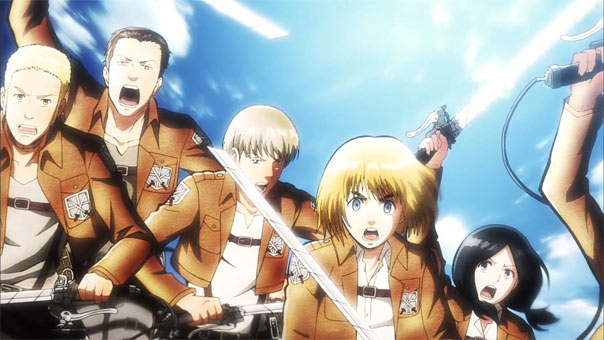 Eren’s comrades on the battlements were conspicuously absent during his skirmish with the Colossal Titan, and not just because they were flung far away, but because they were to a man paralyzed with fear. Jean, enraged his transfer to the interior has been postponed, fumes about having to share his fate with a “suicidal maniac” even though he played all his cards right to get the cushy life he wanted.

Well, everyone, including Eren, learns this week that life isn’t fair, and life for the humans of AoT is a constant cycle of false security and horrendous massacre. No inspiring deeds or words from Eren can change that, but they are enough to motivate Eren’s comrades to follow him into battle. That…doesn’t go well. 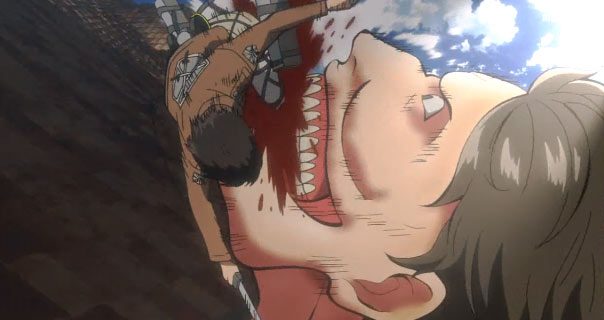 AoT is gradually starting to train me that Eren’s words about defeating the Titans and saving the world are, so far, just that and nothing more: words. And words are wind. Not a single Titan is shown being decisively killed. Eren and his mates look really cool dramatically swinging around the city, then Eren gets a bit too close to a Titan and loses a leg.

That leg is like our hope that victory is possible in this battle, but that Titan is this show, heartlessly snapping that hope up the blink of an eye and turning everything to shit. One by one, his comrades, who had enough lines (albeit mostly death flags) earlier that they’re not just pure redshirts, are plucked up by Titans and…the rest is left to our imaginations. 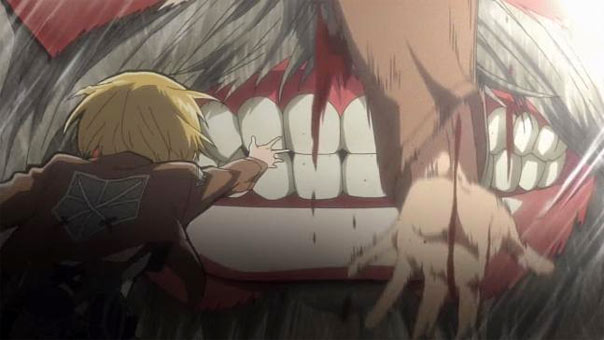 Rather implausibly, Eren doesn’t let the loss of his leg (and whatever other injuries he sustained during his deceleration) stop him from literally snatching Armin from the jaws of death, only to be snapped up himself, losing an arm in the process and being swallowed, to Armin’s infinite dismay. Holy Crap, I thought to myself: the protagonist got eaten in the fifth episode.

But the Titans don’t care who you are, how much money or power you have, what your plans for the future are, or why you’re fighting. They’re only interested in what you taste like. I’ve seen few shows where it’s being a thinking, feeling, loving human being sucks this much. Where mankind has been portrayed as this damned and ineffectual. And AoT’s just getting warmed up.