Damn, this was going to be my “last chance” episode that would decide whether I would drop Kokkoku, and what do you know, the story finally shows some signs of life! Granted, it does so in an episode full of death, starting with the guy Tsubasa is fighting. Tsubasa basically suffocates him as he struggles.

It’s an ugly, nasty business that makes Tsubasa, who can’t find Makoto after killing someone, start to despair. Thankfully Juri, Gramps and Takafumi encounter him before he turns into a Handler, and Juri’s expulsion of the jellyfish/specter stops the transformation.

So Tsubasa is fine, but now Stalled. Then Majima appears, saying she has the kid (who is with the crotchety guy who amusingly hates kids) and wants to deal. When Juri hears Majima’s terms, she wonders why she didn’t just come and talk to them rather than causing so much chaos.

Majima doesn’t have a good reason, beyond perhaps wanting at the time to give the Yukawas a taste of revenge for what they did to her family. Juri will help her try to retrieve her family, but she won’t forgive her for doing things the way she did.

Majima’s plan is to summon three Heralds, but she can’t summon the necessary murderous intent to do so. The summoning falls to Takafumi, who is just experimenting whether he can do so on a whim, and can. Talk about coming through with a hidden power in the clutch!

In any case, the Herald/Handler appears, and Gramps works overtime transporting himself and Takafumi out of its deadly reach, while Juri jumps onto it from above and begins expelling the three jellyfish within the body. 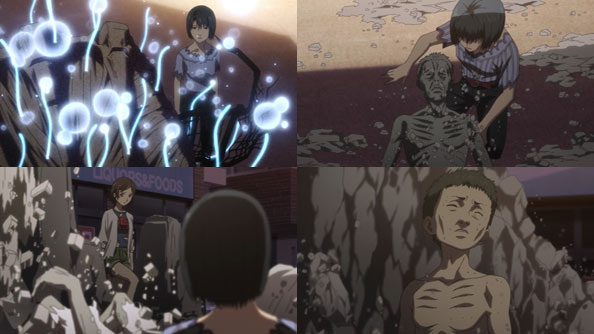 This makes for decent, novel action, with parts of the Handler sloughing off into clouds of wood, sand, and dust, but those clouds eventually freezing along with the rest of Stasis.

Unfortunately, while Juri released the jellyfish from Majima’s parents and brother, she can’t bring them back to life; only their semi-mummified bodies remain. Majima solemnly takes them into her arms and dusts off their faces.

So what’s next for this bunch of misfits? Will Majima honor the agreement and return Makoto? What about Sugawa? And how many underlings could possibly still be running around to serve him?

At last we see Majima Shouko’s side of the story of the time she and Juri last crossed paths. She was riding in a car with her mother, father, and brother (the latter two being violent dicks) when the Yukawas activate Stasis.

Overwhelmed by despair at their sudden predicament, one by one her family is surrounded by tentacles and dust and floats away, leaving her alone. She finally meets another moving soul in young Juri, who is so upset about her dog dying she expels Shouko on sight. 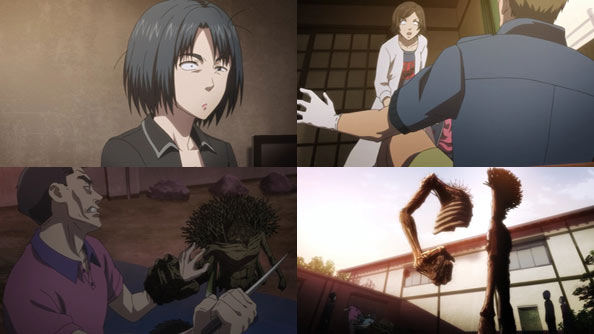 Juri’s goal, which is different from Sagawa’s, is to retrieve her family from Stasis, if she can. She believes Juri’s ability may be the only way to do that, and manages to get one of Sagawa’s men to side with her in exchange for sex at a later date. Suddenly Juri teleports in and expels that guy, leaving Shouko with just one guy.

There’s a fleeting opportunity for Shouko and Juri to talk, woman to woman, but it doesn’t happen, because there’s no trust on either side. So Shouko and the eye-spot dude go to Sagawa, who again uses a sacrifice in order to summon not one or two but three separate Heralds, which Shouko believes to be her lost family members. 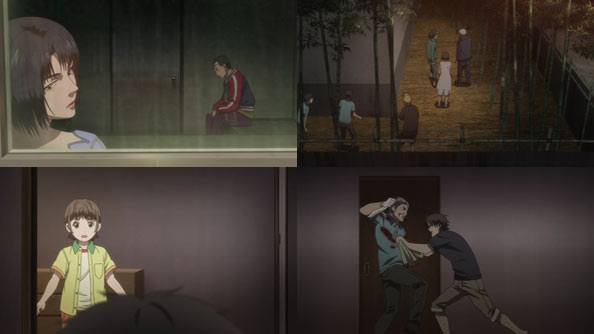 Shouko seems to refine her goal on the spot to simply recover her family’s bones, not get them back alive, which while noble, is simply not as pressing or compelling as the situation of the Yukawa’s, who are all still alive and haven’t given in to despair.

Juri and Gramps manage to rescue Takafumi, despite his resisting when they come to get them (Sagawa apparently set him up outside like bait with a big tin of chocolate). The bickering Yukawas are immediately surrounded, and Gramps teleports them away, but it’s going to be another chase. Yippee.

Finally, Tsubasa and Makoto make it home, but their tail gets there first and takes the note Juri left for her brother. Thankfully, Tsubasa can sense something isn’t right just in timeto save Makoto from getting stabbed.

Somebody ends up stabbed in the end, but as the fabric the knife goes through is the color of the towel Tsubasa was using as a shield, we don’t know who yet.

While it’s good to know more about Shouko’s motivations, things continue to move at a snail’s pace, while the cat-and-mouse game through the drab, lifeless Stasis has long since grown stale.

Juri’s would-be attacker is stopped by Gramps’ catlike reflexes and Juri’s own power, and she gets Gramps to talk about the incident from her youth in which the two went to the Stasis because her dog Andre was about to die, then she used her power out of anger to almost cast Gramps out of Stasis. While running around looking for her, he passes a young Majima on a bridge with her big stuffed cat. 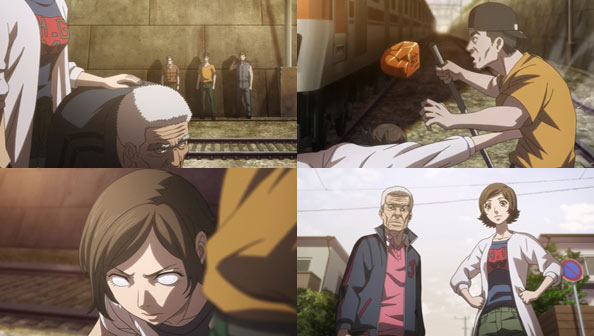 When more thugs go after them and Gramps has to stop to rest, it’s No More Miss Nice Juri. She’s done running, and decides to launch a counterattack on the thugs, pulling out their specters one by one. The fight works up an appetite, so they head to a konbini for some food and drink.

There, they find the place a mess thanks to the thugs, and Juri curses them for being so awful before trying to turn matters to the girl on the bridge years ago, which Gramps only somewhat remembers.

They later can’t find Tsubasa or Makoto where they left them, but Juri believes the specter of the man killed by the Handler transferred to Tsubasa, which means he’s moving around somewhere.

Meanwhile, Takafumi is being grilled by Sakawa and his friend, who think the Yukawa family has been selfish and reckless in their ownership and usage of the Master Stone.

Takafumi, the worst negotiator in the world, doesn’t seem like he’d resist whatever ridiculous terms these sinister sweet-talkers come up with, as he still believes they’re holding his family members hostage. 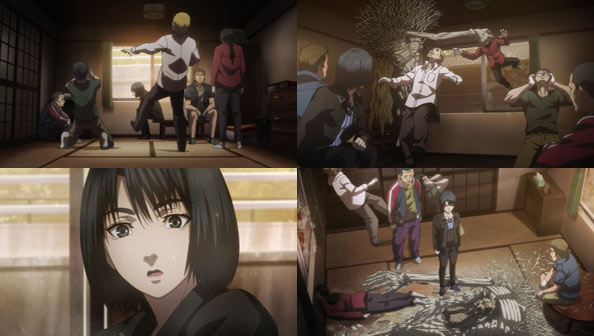 Back at the Yukawa residence, Majima and the other henchmen sit around. One gets restless, and decides to demonstrate the proper way to strangle someone on a stalled guy, but gets killed by a much smaller and weaker but still deadly Handler/Herald.

When Majima inspects the remains of the Handler, she finds a desiccated human body, and tells the others that those that stay in Stasis and give up control of their bodies to the Specters end up as Heralds. Someone in Majima’s family met such a fate, which goes a little further towards explaining her present beef with the Yukawas.

Juri escapes death by strangulation when her eyes go white and she spontaneously gains the ability to expel “specters”, the jellyfish-like beings humans must merge with to be able to move in the Stasis. Before long, the three men in her house are stalled, and Juri escapes with The Stone, much to the chagrin of Majima.

Now that we’ve seen flashes of both Majima and Juri’s memory, it’s clear the two knew each other, and were both involved with specters during that time. Majima remembered, Juri didn’t, and now Majima is with the bad guys, working against Juri’s family. It’s not much, but it’s something.

Meanwhile, the Bad Guy leader (Sagawa) tests the abilities of the Herald on an expendable henchman, and learns that the monster is getting smaller, and thus his power isn’t limitless. Before long, they may even be rid of it, and able to do affect change in Stasis as they see fit.

Coincidentally, the specter within the now-dead henchman travels to Makoto and merges with him, enabling Ma-tan to wake up, much to the delight of Tsubasa.

With all the Yukawas now free except for Takafumi, Sagawa decides to try to talk man-to-man about ownership of the Stone. In the fact of such intimidation, I fully the gentle, passive Takafumi to fold like a cheap suit.

The tougher members of the family in Gramps and Juri thankfully reunite, but not before Juri gains another tail from a group of thugs who were looting a store when she walked past…not trying to hide herself or her movements in any way despite not knowing who may be around and after her. Baka Juri! 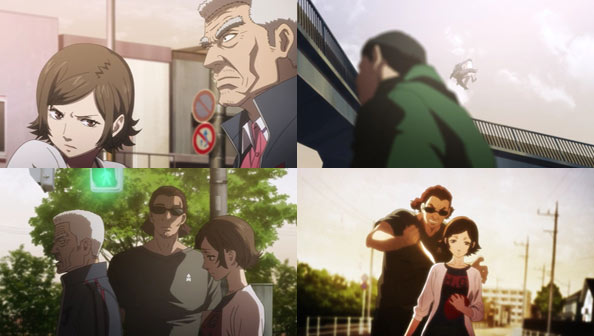 One of those guys appears and tries to keep up a story about simply being some guy who happens to be able to move as well, which lasts all of ten seconds before he and his friends start to rush Gramps and Juri.

With a series of short teleportations, the two are able to get away, and stick to the middle of the road to avoid ambush. However, they don’t take the extra and very obvious precaution of staying away from other people, regardless of if their motionless or not.

The huge goon in sunglasses doesn’t have to go anywhere to get his knife in a position to stab Juri to death; she strolls right up to him! I tell ya, I’m rooting for the Yukawas—there’s no one else worth rooting for—but they aren’t making things easy for themselves with these constant tactical blunders.

I get it; they’re merely civilians unaccustomed to being in this kind of situation, they’re way outnumbered, and they’re scared. But if they want out of it with their all organs still internal, they’ll have to do better.