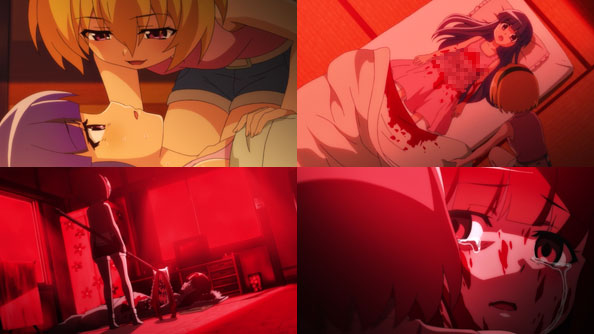 In the fifth and final loop before Rika calls it quits, Satoko wakes her up in bed as usual, but she has a heavy fever and hurts “all over”. Turns out she’s already dead right out of the gate—she just doesn’t know it yet. In this loop, Satoko is the neck-scratcher, and has already killed everyone else. The Oyashiro-sama in her head has told her the priestess-hood must pass from Rika to her.

What awful sin has caused Satoko to be compelled to disembowel a conscious Rika and hack away at her guts with a ceremonial staff? The simple reason that Rika wished and dreamed of leaving Hinamizawa, abandoning Oyashiro-sama and everyone she knows for a sophisticated life elsewhere. There is no greater sin for a priestess than to forsake their deity thus. 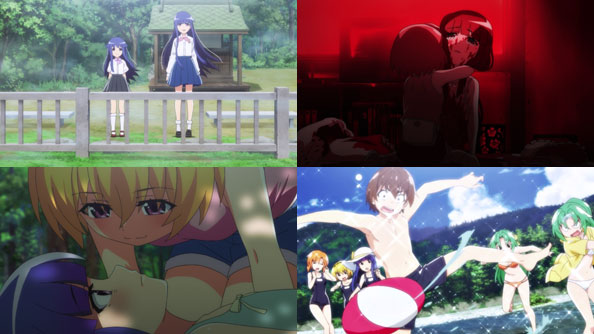 But before she dies, Rika expresses her sorrow and guilt and essentially begs for forgiveness, which Satoko is sure Oyashiro-sama will bestow upon her if she’s serious in her contriteness. The younger and older Rikas converse in an idealized Hinamizawa and wonder why their dreams ever strayed from the village. Then, as Satoko embraces her, hopeful that things will be better next time, Rika closes her pinky and snaps.

Satoko wakes Rika up as usual, only this time outside. Rika’s guts are where they belong, inside her body, and the whole gang is in their bathing suits for a day of summer fun in the river. It’s Higurashi’s version of a beach episode, portraying the Sonozaki twins in bikinis and the other girls in school swimsuits. 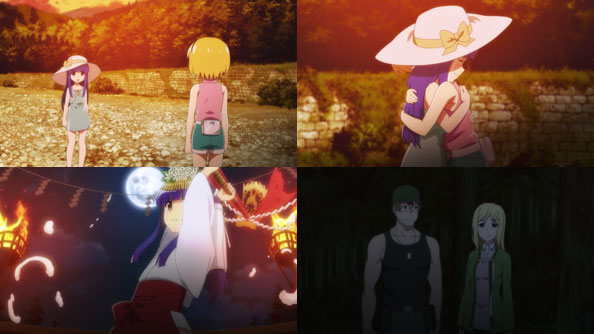 As the sun goes down, Rika talks to Satoko about a realization she hand about two very long, very different dreams she was having. One dream was painful while she was liviing in it, but looking back knows it was full of “shining wonders”. In her other dream, she never noticed those wonders, and was punished for clinging to an “ungrateful” dream (the one where she leaves town for a fancy school).

Rika concludes by saying she loves Hinamizawa, and everyone in it, and Satoko, almost serving as a proxy to Oyashiro-sama, embraces her once more, glad to have heard Rika speak such words. With Rika no longer dreaming of being anywhere else, her curse is seemingly lifted. No one gets the neck itch, nobody kills or dies, and everyone watches her perform the Watanagashi dance.

Then Rika spots Tomitake wandering into the woods and she stops him to say something about her and Takano, only for Takano to emerge from the trees. She wants to talk to Rika too. I wonder what about, and if and how this latest loop, so ideal and peaceful so far, will suddenly go sideways. 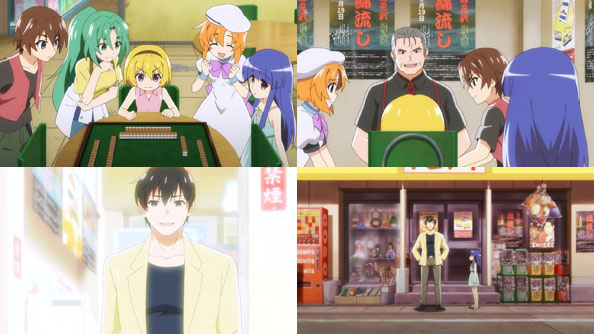 After coming so close to a good ending only for a crazed Ooishi to kill everyone, Rika is buoyed by her friends to try five more loops before using the fragment of the weapon she can use to kill herself for good. I figured the loops would gradually unfold in the next few episodes. Instead, we get all but one in one go!

This new loop starts out promisingly, with Ooishi and Keiichi getting along famously over their shared love of mahjongg (stop trying to teach us mahjongg, anime!) Ooishi’s mahjong buddy also makes an appearance: Akasaka, who is introduced with a soft filter and angelic light. 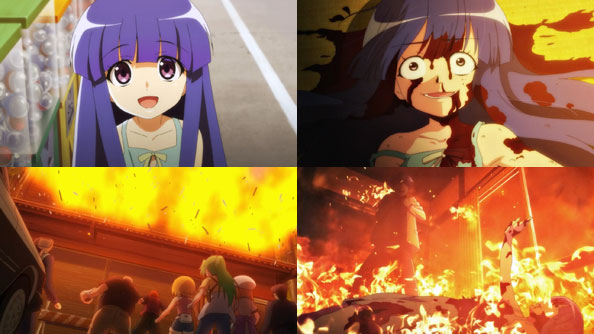 Back in 1978, one of Rika’s predictions saved his wife Yukie’s life, and he’s come to return the favor. Rika asks him to stay for the entirety of the Watanagashi Festival, and he agrees. Rika is genuinely happy and hopeful about this development!

Then there’s a smash cut to her covered in stab wounds and bleeding out on a tatami mat. Akasaka is the crazy killer scratching his throat out. Even as she burns Rika laughs out loud at how whimsical fate is, puts up her hand, lowers one finger, and snaps. 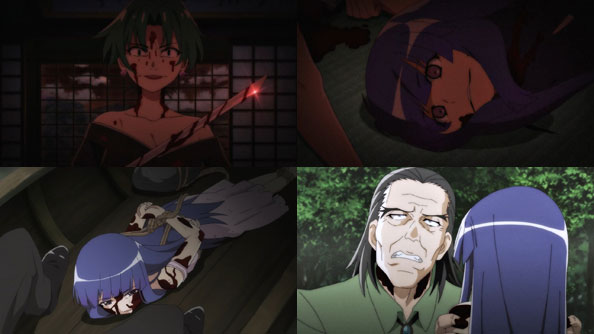 The episode doesn’t bother with the lighthearted fluff; we just fast-forward directly to the killing, as Mion and Shion’s mother is this loop’s crazed slasher, and she uses her katana to behead her own daughter, vowing to erase their family’s blood for good. Rika lowers two fingers and snaps just as her shoulders are relieved of her head.

In the next loop, Kimiyoshi is the killer, and drags Rika by a rope, rows her into the middle of a swamp, and tosses her overboard with a rock to drown her as a sacrifice…but not before Rika has to endure way too much unhinged monologue and bad breath for her taste. As she sinks into the swamp, she lowers three fingers and snaps. 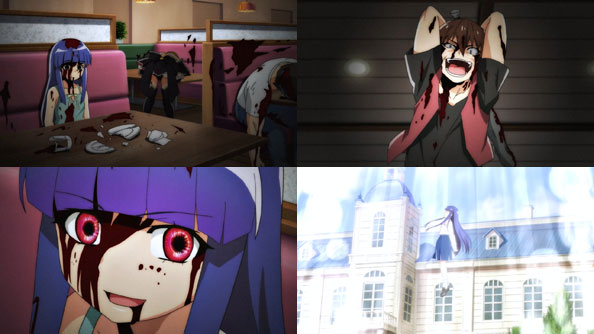 Just when we’re wondering what ridiulous hell-scenario Rika will end up in next, there are columns of riot police outside the cosplay cafe, where a very itchy Keiichi is bludgening everyone to death, including Rena, who can’t get him to wake up from the bad dream. Rika gets Keiichi to end her life quickly by telling him the secret to getting rid of the “maggots in his neck” is to bash her skull in and eat her brains. She lowers four fingers and snaps.

These loops have become the most unbearably hellish torture for Rika, who is trapped in the goriest version of Groundhog Day ever. It is by far the bloodiest and hardest-to-watch episode of Gou to date. Those scratching sounds…Jesus. If Rika keeps to her plan, she’ll only have one more life to endure before ending it by her own hand. But will that really work? 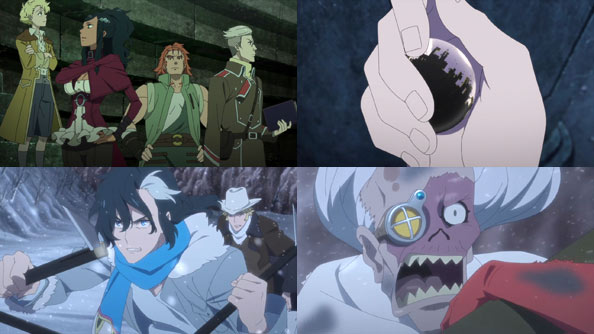 Willard & Co. make good use of their Dogville Detour, locating some kind of magical item that Willard believes Yuliy will find useful once he’s found the Ark of Sirius, which is a Very Big Deal.

As his friends support him from afar, Yuliy and Bishop make quick work of Klarwein’s modified cyborg vampire soldiers. Turns out Yevgraf’s lack of confidence in Klarwein’s plans was justified! 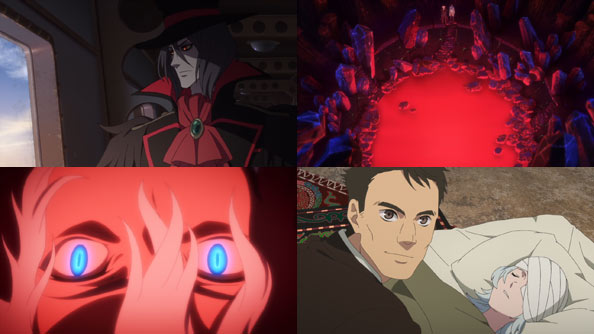 While he may be dressed like a goofy cartoon villain and has a ridiculous (and awesome) airship to boot, Yevgraf is looking more and more like a more complex villain, someone who is backed into the corner.

He’s walking talking proof that maybe it’s better to have never become a immortal vampire than to become one and then, many centuries later, find out that hey, he’s not immortal after all!

Once past Klarwein (which again, wasn’t hard), Yuliy and Bishop enter the cavern where the Ark is believed to be sealed. Where Mikhail’s vampirism kept him from passing the barrier, Yuliy gets through. 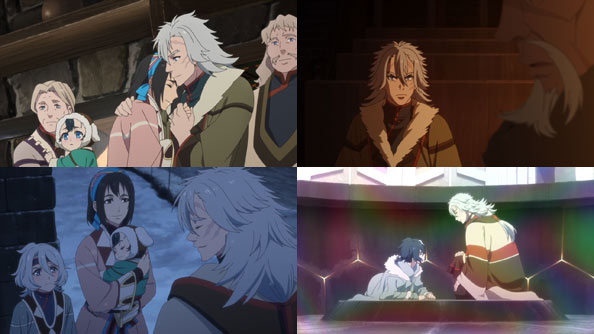 There he bears witness to a very thorough flashback of the events that led to his father Alexei leaving one day and never returning. When Mikhail and Yuliy were attacked by a bear, Akasaka (the soldier, presently a hermit, who was seeking the Ark) saved them, and befriended Alexei.

Alexei wanted to reform the ways of his people in order to coexist better with humans like Akasaka, who were proof to him that they weren’t all bad (and hey, they’re not). But he could not escape his blood, which demands that someone of royal blood basically sacrifice their soul and corporeal freedom in order to seal and thus protect the Ark.

It’s heartbreaking to see what a vibrant and prosperous town Dogville was in its heyday, as well as seeing Yuliy and his family all alive and well and together. But it’s perhaps even more heartbreaking to find that his father is still conscious within the Ark itself, basically keeping it sealed with his soul. 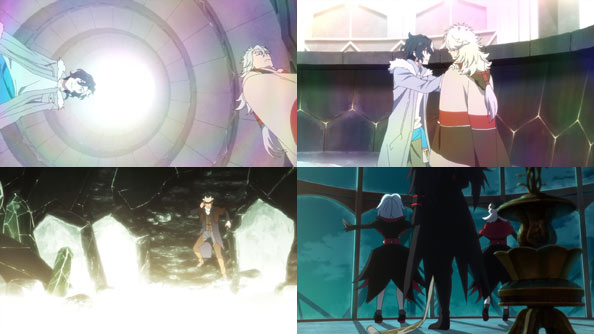 Just as his father sought a new way for his people to live—a “new Sirius pride”—his son seeks a way to free his father; a new way to seal the Ark. That way might well be in Willard’s possession.

Alexei isn’t totally against Yuliy doing what he can, but not at the cost of his life, soul, or freedom. Even after everything that’s happened in the world since he was sealed away, he doesn’t see it as a burden; he sees it as vital to keeping the world peace.

The problem is, when it’s time for Yuliy to say goodbye to his father, a great pillar of light erupts from the once dark red pool in the chamber, alerting Yev and the twins in the airship that Yuliy has finally arrived there and done what he’d hoped he’d do. Yuliy’s intentions are noble, but now there are matters both more pressing…and more competent than Klarwein!