It is a crying shame that such an intelligent, capable, and beautiful young woman as Euphyllia finds herself in such an existential purgatory. She’s immediately sympathetic as someone whose life has taken such a sudden, sharp turn, she’s still recovering from the whiplash. This episode focuses on the young lady and the unmoored feeling that now suffuses her days. 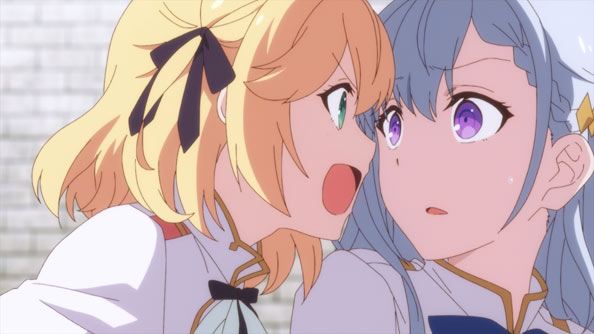 There’s no morning bed talk between Euphie and Anis, as the latter had flown of on her broom at dawn. She reappears during Euphie’s breakfast, setting off the house alarm system she invented, and offers Euphie a chance to ride the broom. While Anis promises not to let go, she does so, and Euphie takes to the skies full of joy and excitement. It’s only when she realizes Euphie isn’t behind her that she comes crashing down. 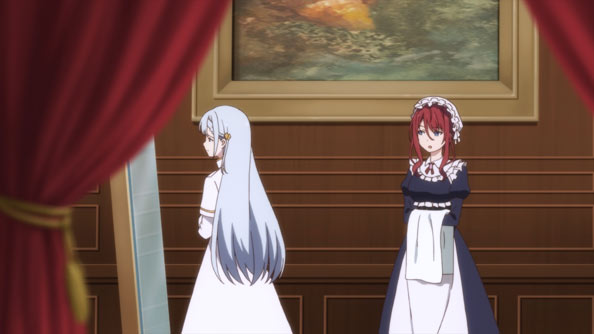 It’s a fitting practical symbol of Euphie’s difficulty acclimating to the sudden freedom Prince Algard’s shunning and Princess Anis’ friendship has afforded her. Ilia, the not-so-secret MVP of the show so far, assures Euphie that Anis was once even more absurd, idiotic, and insane, while at the same time calling her duty to her mistress a perk.

Ilia tells Euphie if she “doesn’t like” the current arrangement, she should say so now and save both of them. But Euphie doesn’t dislike it, she simply doesn’t quite yet understand Anis, saying she feels “so far from me.” Iwami Manaka delivers this line with such longing and vulnerability, I almost felt like Honda Tooru had entered the room. 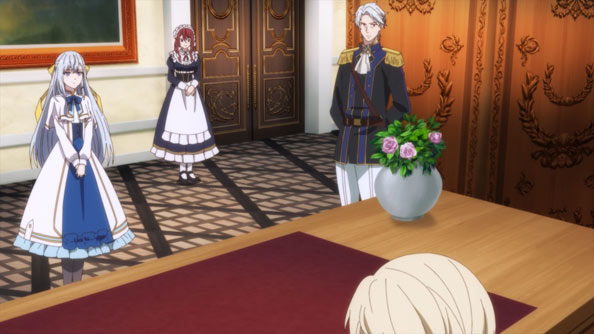 There’s some foreboding about Euphie’s audience that day, but once it takes place I see that I had nothing to worry about. Both her father Duke Grantz and King Orphans contine to be the Best Dads. Both the prince’s and his friends (themselves sons of powerful nobles) have one version of the story, while Euphyllia has another.

Neither man questions Euphie’s version of events nor blames her for giving Lainie Cyan advise. Euphie refrains from vilifying Algard, as even in the moment she was being insulted and humiliated, she felt more righteousness than malice, like the prince was yanking against that which tied him down.

In this scene Iwami Manaka once more shows how good she is, resigned as she is to the fact the prince’s heart never had any room for her, but that fact isn’t a source of great pain. What she truly feels is nothing; numbness. While her father meant well, telling her she doesn’t have to worry about the future, and there’s “nothing for her to do” might just hurt her more than Algard did.

When she pays a visit the royal servants who had been preparing her portrait and wedding gown, Ilia mentions how bad Anisphia is at maintaining her measurements, and how it requires constant mending of her dresses. At the same time, Ilia adds that Euphie is now free of corsets and bustiers. There’s nothing to tie her down. Nothing at all.

The next morning, a totally sleep-deprived Anisphia bursts into the dining room like a bat out of hell, wearing practical work clothes. She’s extremely excited to present Euphyllia with the magical tool she promised to make. It’s a sword that allows Euphie to summon and focus all of her various magical skills. Fittingly, Anis names the sword Arc-en-Ciel.

This is another subtle yet effective nod to Anis’ past life in our world, as it is a French word for rainbow. Rainbow also carries double meaning as a reflection of the many colors and kinds of magic Euphie can wield, as well as its status as an LGBT symbol. With Arc-en-Ciel, Anis hoped to unlock Euphie’s smile, as well as to see her magic, which Anis considers more beautiful than anyone else’s.

So much great dialogue and vocal performances and nuanced facial expressions fills this episode, which is the most melancholy of the three and the closest look yet into Euphyllia’s personality and present situation. It all culminates when after Euphie’s badass demonstration, she and Anis sit under a tree together to rest.

Anis, who stayed up all night working on Arc-en-Ciel, nods off and rests her head on Euphie’s lap. But before she does, she says the sword and Euphie are a “perfect match” because Anis always thought she was “pretty as a rainbow”, and “so pretty it’s unfair.” It’s the first time anyone’s rested their head in her lap, and it makes Euphie cry.

She cries because she envies Anis so much for being who she is, and how badly she wants to be “even the least little bit” like her. But after harrowing days of being told she has nothing more to do, nothing to worry about, and nothing tying her down, here’s this feral princess literally weighing her down, keeping her tethered to the ground, with her. It’s something that must feel so good one could cry.

Euphie may still be overwhelmed by a personality so opposite hers, but at the end of the day, she has a good heart and kind soul just like Anis. In time she’ll surely feel more comfortable and more like she belongs. She may even find some of the Euphie she envies so rubbing off on her—and vice-versa. Freedom can be terrifying, so it’s best to have a guide.