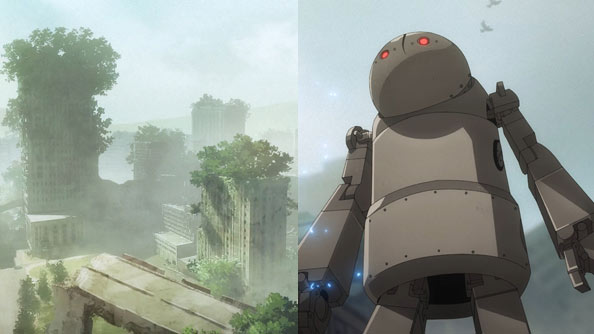 In episode two, perspective shifts from the YoRHa in their pristine orbital headquarters to a battered but still operational Machine Lifeform (ML). Curiously, despite having apparently been created by “Aliens”, they have a very similar bootup and heads-up display as the humans’ androids.

This single ML unit starts to walk, creating a sense of scale and grandeur to the ruined landscape. Upon returning to a base, it finds a book, and in that book, a bookmark with the image of a white lily. Scenes of ML are interspersed with a childlike narrator telling the story of the MLs with colored paper compositions.

This particular ML develops an “emotional matrix”, deemed a critical error, and its red eyes turn yellow, denoting neutrality. It ;earns how to garden, and devotes its existence to growing flowers, gathering “followers” in the form of other yellow-eyed MLs.

The comparisons to WALL-E are obvious from the serene, gorgeous empty vistas ML inhabits to the way the storytelling takes place without dialogue (narration segments aside). But hey, if you’re going to borrow, borrow from the best. 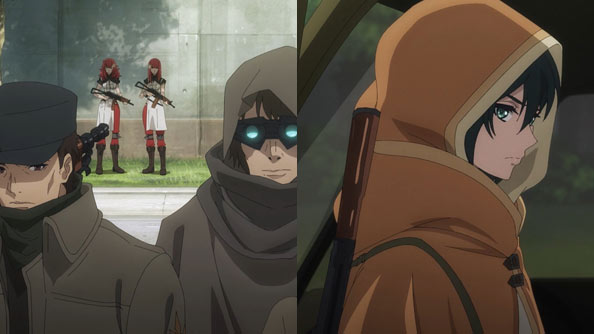 Not far from ML’s growing garden is an embedded group of human resistance fighters led by…Lily. I immediately wondered if, like the stiff redheaded twin maintenance units assigned to the unit, she was an android in disguise. Regardless, she’s bitter about the “Council of Humanity” on the Moon ignoring all requests for badly-needed reinforcements.

Every encounter with the red-eyed MLs means at least one of her unit will be injured or killed, with no one to replace them. They’re ambushed when trying to gather resources to keep fighting, and have to abandon those resources when the MLs send in kamikaze units. 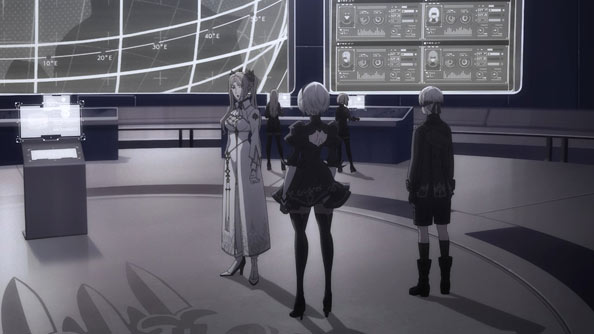 Little does Lily know that up in orbit, she’s about to get a helping hand, in the form of 2B and 9S. When 2B wakes up she tells 9S she finds the sound of his voice comforting, only to cooly head to the control room without him.

They may have just come back from a brutal battle that claimed 9S’s memories, but Commander White sends them back down to perform recon on the resistance unit. They had an android embedded with the unit, but there’s been a breakdown in communication.

2B and 9S can’t come soon enough, as a huge mass of red-eyed MLs trample and destroy the yellow-eyed peaceful bots and their garden on their march to kill the humans. Lily demonstrates that she’s a capable leader despite her youth, quick and decisive and maximizing the limited resources she has.

When they mine a bridge and lure the red-eyed bots across, the detonators fail to work. It’s here where Lily’s underlings spot the yellow-eyed ML we know and have grown fond of. He stands in front of the hundreds of red-eyes, seemingly to try to talk them out of further fighting.

But before he can turn any red eyes to yellow, the entire bridge is lit up by missiles from 2B and 9S’ flying mechas. 2B makes a characteristically stylish entrance, and Lily not only knows her as “Number Two” but is very shocked to see her, or indeed any Council reinforcements. That said, Lily’s bloody shoulder seems to confirm she’s a flesh-and-blood human, not a “tin man”. 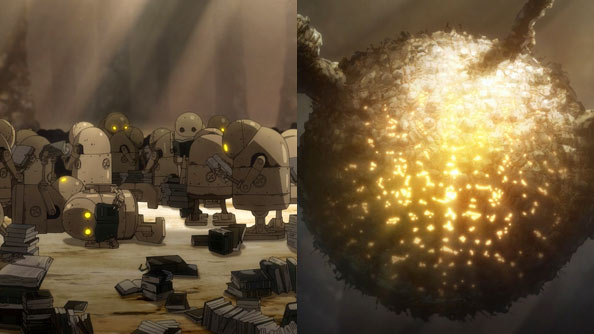 As for our yellow-eyed friend, he didn’t die in vain, nor is he alone. Hundreds if not thousands of his kind are soaking up knowledge from the library of the civilization they toppled, and seem to be combining their amassed knowledge and brains into a single mega-brain.

While I’m not sure what this is quite about, from a visual standpoint I can at least guess that yellow eyes and books are, at least now, less of a threat than red eyes, kamikaze bots, and slaughter. The narrator also describes the yellow-eyed bot anomalies as “treasures”. Were they meant to evolve in this way, or was it just random happenstance?

Whatever the answers are, and even if they’re never revealed, I remain thoroughly intrigued, and the setting lends the show a welcome splash of color and life from last week’s largely monotone, industrial battles. The post-ED omake featuring a cloth puppet 2B and 9S answering fan mail provides humor and whimsy.