As shounen heroes tend to do, Shinra struts into Princess Hibana’s lair and prepares to go a second round, despite having learned nothing about how to defeat her ability that had him flat on the ground. He’s confident that between his talents and determination he’ll figure something out and rescue Iris. Hibana is ready for him, but because she’s a shounen villain, she explains what her ability does, which enables Shinra to resist it. 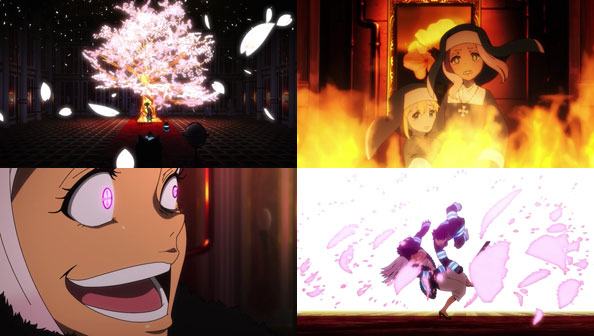 Of course, heating up her opponents so they become lightheaded ragdolls isn’t Hibana’s only trick. She conjures up scores of flowers to launch at Shinra, and finally releases her featured attack, which bears more than a passing similarity to Captain Kuchiki’s Senbonzakura.

Hibana is convinced that the world is made up of the burned and those who burn, and ever since all the sisters but her burned in the convent, she’s dedicated herself to…herself. Burning whoever and whatever she needs to to get ahead. It’s how she became a successful researcher, and it’s how she became Captain of the 5th.

But here’s the thing: Iris survived too, and Iris is still around and kicking despite not becoming “the devil” to the god Sol everyone prays to. Which means there were obviously more than just the single evil path Hibana took. Iris continued her sister training and became a good and caring person who helps comfort people both during and at the end of their lives.

As we see in the expanded flashback, Hibana was unique among the other sisters in her ability to manipulate flames into beautiful flowers, and change their colors with chemicals. Iris and the others loved her flowers, but the nuns in charge discouraged her, warning that she was, well, playing with fire.

But Iris never forgot their promise: that if she overcame her shyness, Hibana would show her her flame flowers once more. This time, defeated by the flames she believed only served her, and by someone she deemed just more “gravel” to be trod upon, the hard crust that those old flames created around her heart shattered, revealing her heart wasn’t hardened to the core.

Princess Hibana is redeemed, the 5th and 8th cease hostilities, and she even develops a little crush on Shinra, who after all managed to defeat her, making her reconsider whether his prattle about heroes and saving people without getting anything in return was just empty BS.

As for Captain Oubi, after the credits he calls Hinawa, announcing he’s finally ready to join the fray, only to be told that it’s already over, and the dramatic battle music stops abruptly.