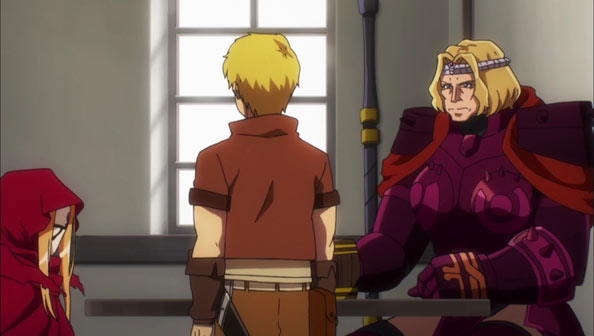 Climb and Blue Rose prepare to go to battle with Eight Fingers, and Climb mentions his little sparring session with the great Stronoff. He wants Evileye to train him in magic, but she doesn’t think he’s ready or talented enough; Gagaran notes that Evileye is simply worried about Climb.

Evileye also mentions the fact that their colleague Lakyus may be having trouble controlling the cursed sword in her possession, and that leads to the mention of Momon and a quick overview of their great deeds. While they may be rivals, Evileye might also see them as potential allies in the fight against the Fingers.

Meanwhile, Sebas walks the city streets thinking about the position he’s in, and more specifically what needs to be done to keep Tsuare safe from her former tormentors. A haughty jackass happens to be stomping on a poor kid who happened to bump into him when Sebas arrives to put the bully in his place. Not only does climb witness Sebas’ good deed (and his fancy moves), but so does Brain Unglaus. 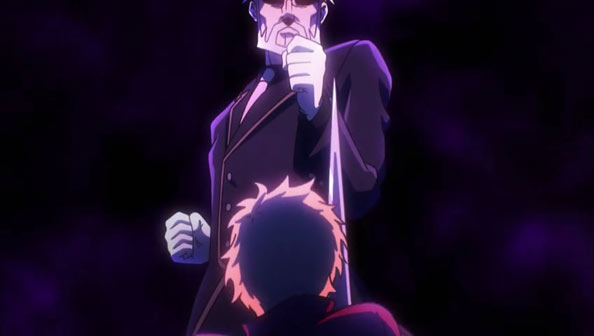 Climb tracks Sebas down and begs him to teach him the move he saw. Sebas does a quick character survey of Climb, learning from his hands, his sword, and his words that he’s a decent chap, then warning him that the move he shows him could kill him if he has no one he cherishes and vows to protect.

Climb has Princess Renner, so there should be no problem, but still…damn, Sebas is scary when you’re his target, even in a supposed training session. Climb manages not to die of shock, and proves he’s a loyal and true servant to his mistress. Brain witnesses all of this and introduces himself to Sebas and Climb…just as five assassins from Eight Fingers come for Sebas. 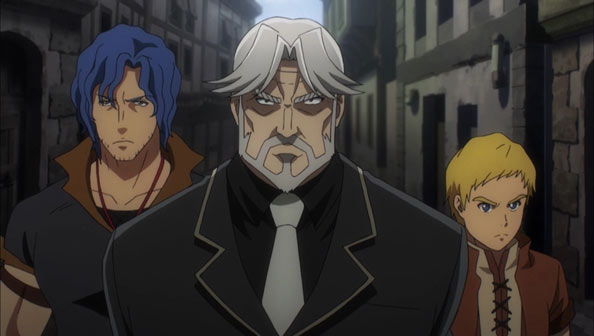 Now, I have no doubt that Sebas could have easily taken all five attackers on his own, but one doesn’t turn down an extra pair of hands, so he lets Brain and Climb take on two of the five. They handle themselves pretty well despite Climb’s greenness and Brain’s rust.

Sebas then decides to head to the brothel where he rescued Tsuare and nip things in the bud, and Climb and Brain join him. I must say, it’s an inspired party, and I look forward to seeing what they can do. I just wish this show didn’t look so dang rough.