Sagawa completes his merging with a Specter while able to maintain his own will. I just wish his various “experiments” he performs had a bit more bite. Now he’s essentially just a Hulk-like OP monster man, and he doesn’t even seem to take much if any joy out of his success. As he says, he’s a cautious man and always has been, but in this case a cautious villain is a dull villain.

Killing off his remaining followers didn’t really do much for me, since I never knew them anyway. It’s Sagawa’s apparent disinterest in quickly dispatching the Yukawas, Majima and Sako that confuses me.

More than once they butt right up against him, and he doesn’t put a lot of effort into taking them out, giving them ample chances to escape him, and even leaving Tubasa with them.

At this point in the story it feels like things have stalled, which shouldn’t be the case considering how the villain has powered up and become even more lethal. But it feels stalled because Sugawa is such a drab, boring dude who has slowed to a crawl right before the finish line.

It’s even more concerning that this is the eighth of what I presume to be 11-13 episodes. If things are this slow now, and the only remaining baddies remain as dull as they are, how in the heck are they going to fill the time?

Perhaps the family drama that results if Gramps really is expelled from Stasis, and Takafumi continues to oppose the rest of the family’s desire to be rid of Stasis, will inject some energy into the proceedings. All I know is the increased focus on the bad guys this week didn’t do the show any favors.

CCS keeps on keeping on, with Sakura capturing another card and only the slightest movement made on her “clock dreamworld” situation. She also learns that yet another frined of hers is stinking rich, or at least gets to live in the house of someone stinking rich; namely Akiho living in the house Eriol used to live in.

Eriol may have been “very mature and a wonderful person”, but he still hasn’t replied to Sakura about the Clear Cards. Nevertheless, Akiho invites Sakura and Tomoyo over to see her collection of books from her travels.

Sakura invites Syaoran, who can’t go because he has unspecified “plans,” but Sakura, undiscouraged, and asks him if he’ll go out with her the Sunday after that, to which he agrees before trying to flick a petal off her shoulder. Their romantic scene is rudely interrupted by Kero, telling them “the world ain’t just for you two!” Speak for yourself, purse rat!

After another school day and a successful cheerleading practice, Sakura heads home and is greeted by her brother who seems like he wants to say something but doesn’t, and when she reaches for her closet, ends up in the clock world again. No matter how many questions she asks, the cloaked figure won’t answer her, and the clocks only multiply. Frustrating, right! 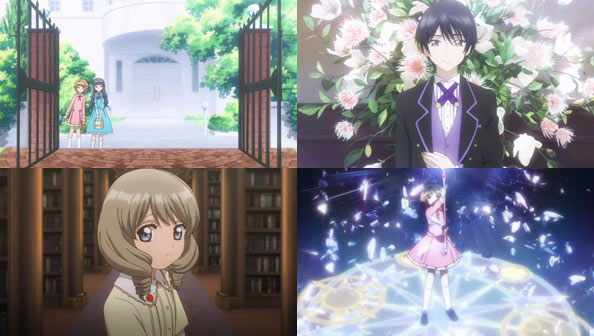 That Sunday, Sakura and Tomoyo show up to Eriol’s former, now Akiho’s current house, and it’s not only huge and stately, but comes with a dutiful butler named Yuna D. Kaito, for whom Akiho used to cause “all kinds of trouble” when she was little. As guests in such a house, the girls mind their manners, and flowery formal pleasantries fly freely.

After tea and cake that tastes so good Sakura lets out an exhortation in some other language, the girls hit Akiho’s book collection, which is basically a damn library. The book Akiho is currently reading and considers a favorite is not there, and when she runs to get it, Sakura notices a group of numbered books missing, along with a section of shelving: this week, she doesn’t have to fight the card or become friends with it; she only had to find where it was hiding. 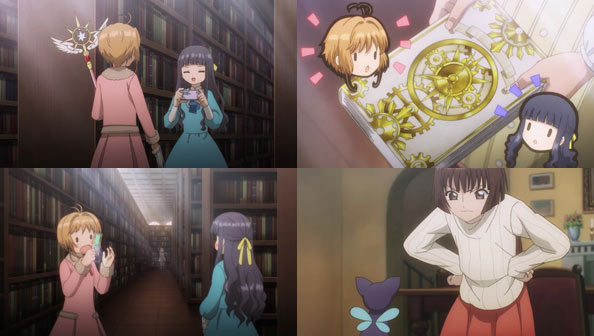 The card, “Lucid”, thus captured after the oh-so-brief hide-and-seek, Akiho returns with the book, the cover of which looks just like the clocks and gears in Sakura’s now waking dreams. It’s called Alice in Clock Land, not written by Lewis Carroll. Sakura wants to learn more, but Kaito interrupts their discussion asking if they want more refreshment.

Back in the UK, an impatient Akizuki Nakuru complains to the cat Spinel Sun about why they haven’t gone to Japan to help Sakura out. Eriol insists that there’s nothing they can do but wait “for the time to come.” Cut to Syaoran studying some kind of magical tablet in his room in the dark, and roll credits.

I’m encouraged that the aesthetic of Sakura’s dreams has finally shown up in the real world, and that Akiho is most definitely connected in some way. Her interactions with Syaoran continue to be adorable beyond compare, though I wonder if they’ll be able to go on an entire date without interruption from Kero, a Card, or something/one else.

As for still being mostly in the dark about everything going on around Sakura, well, at least we have good company, in that Sakura herself is just as in the dark! Nothing for it but to keep capturing Cards as they come, and living life in between.