The age of man revering the gods has ended.

Bold, resonant words from a leader of humans invading and destroying the godly sanctuary of Temple Ark. That’s right, it’s not the gods and demons going at it, but humans, all hepped up on power they’re not supposed to possess. Now we’ve gotten to the good stuff…Shingeki no Bahamut has returned, and it’s just as lush, gorgeous, and engaging as I remember it.

Whither Favaro Leone? That’s one of many questions left unanswered in the season two premiere of Virgin Soul. Instead, we have a new heroine in Nina Drango, who is as adorable as she is tough as nails. She has superhuman strength, speed, and stores of energy, which not only make her very popular in the burgeoning Royal Capital of Anatae, but also give her the idea to take up some bounty hunter work, provided by Bacchus and Hamsa, who grudgingly allow her to crash there.

Nina also has an interesting little quirk that seems like just that at first: she’s extremely bashful around handsome men. And who’s more handsome than King Charioce XVII’s right-hand man Kaisar Lidfort? For chrissakes, he’s got better eyelashes than Nina. The two meet while both on the lookout for the “Rag Demon”, a wanted vigilante who seems to be in the business of freeing his fellow demons from bondage, and also bears a striking resemblance to everyone’s favorite fallen angel, Azazel.

The Rag Demon literally bumps into Nina, sending her flying through the air, and we’re treated to a steadicam shot of her appearing still as the world around her spins around and around and she realizes who it was who bumped into her.

The gorgeous setting is matched by even more masterful direction and camerawork, with lovely organic sweeps, zooms, pans, yaws, pitches POV shots…look, I’m not a cinematographer, okay? I don’t know all the jargon. But I know what’s good, and this is very very good stuff.

Turns out, that little quirk of Nina turns out to be much more than that. Climbing to the top of a tower inspired by the Canpanièl de San Marco in Venice, she comes under attack from the city’s dragon knights, beleiving her to be in cahoots with the Rag Demon. She falls and is caught by Azazel, and her close proximity to him finally causes her to blow: streaking through the sky in a pink flare that lands in a building, then emerging…as a really cute, precocious, cool-looking red dragon. 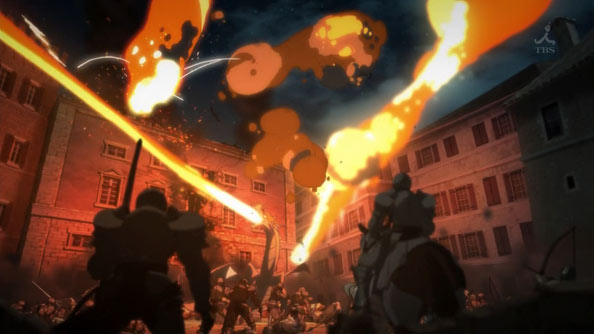 The city defenses give her a fight, but she’s ready for one, and gives as good as she gets in a virtuoso display of destruction. Even the mecha-like giant fighting suits the humans have are little match for her power, which is just as considerable in dragonform as it was when she was in the form of a 16-year-old girl trying to make it in the city to support her mom back home.

The carnage and destruction continues, until suddenly everything goes quiet and white, and Nina wakes up on an operating table, fan blades spinning above her, and none other than Rita at her bedside, sporting her characteristically ambiguous expression. Bored, tired, unimpressed? Probably none of the above; Rita seems aware she’s got herself a rare specimen on her hands: a girl who can become a dragon.

As for the illustrious and well-loved King of Anatae, Lord Charioce XVII: he is the man we see in the beginning, raiding a sanctuary of the gods and no doubt pillaging divine tech, ignoring warnings that humans will never be able to control such power. Nina, in her naivete, goes along with her fellow citizens in voicing her gratitude for the king.

There’s lots of juicy meat to sink our teeth into in this new Shingeki no Bahamut. Familiar faces and places, an instantly rootable new heroine and a fantastic battle combine to get things off to an auspicious start.