After its best episode yet, I wasn’t under any assumptions that the show would keep getting better and better, but last week is followed up by a solid, satisfying outing that explores the new status quo among the class now that Glenn is actually giving a shit; this is something that couldn’t be explored last week because of the far more pressing terrorism.

It’s Magical Competition time, and the games will be performed before the queen herself (and Rumia’s biological mother) Alicia VII, but Class 2 is unenthusiastic. Glenn assures them he’s after nothing less than Victory, and appoints those he believes are the best in the individual fields the various events focus upon.

Because the whole class is involved, and Glenn is so confident, everyone becomes engaged and motivated, and Sistine becomes his very active advocate of his strategy. Only Rumia and we know the truth: Glenn actually would have preferred to use only his best students for all the events.

But he can’t go back now; he’s in too deep. I appreciate that he’s bearing the discomfort that comes with knowing he’s dug himself in a big hole, but is willing to stick it out for the good of his students. In fact, he doubles down by entering a bet with Class 1’s instructor Halley involving three whole months of salary…and the bastard is already hungry!

The competition prep is punctuated nicely by a B-plot involving Queen Alicia’s guilt over abandoning Rumia (even if it was for her own good), as well as a glimpse of family life with the Fibels. For her part, Fibel considers Sisti’s parents her mom and dad, and Sisti her sister, so that’s all there is to it. 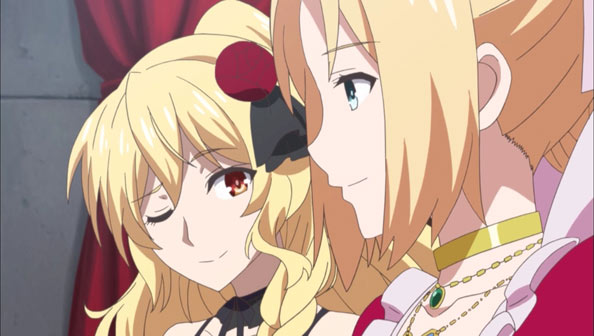 We later learn on the day of the competition that Celica is an old friend of Alicia’s, meaning not only does the queen tolerate her familiar manner, but she also trusts Celica’s faith in Glenn. That trust is validated when Class 2 goes on to place in all the events thus far, surprising everyone, including themselves and Glenn.

I believe a non-trivial amount of their success is thanks to the confidence Glenn instilled in them all, backed up by Sistine and Rumia, which allows them to focus and maximize the skills they need to harness. It’s also great to see Glenn put Rumia in the Mental Defense event, knowing full well from the past couple episodes how tough she is (more than Sisti, to be sure).

When Glenn sees Rumia’s badass Class 5 competition, Jaill, he starts to sweat a little, especially when the instructor in the even turns out to be a real perv. But to Jaill’s credit, he’s not an overly aggressive or disrespectful opponent; he simply believes he’s the best and Rumia is as frail as she looks.

He’s mistaken, and the revelation that he ends up unconscious while standing while Rumia is still awake to take the win was another great surprise. Competition episodes can be a bore, but this one excelled by leaning on its characters and their relationships. It was a lot of fun. 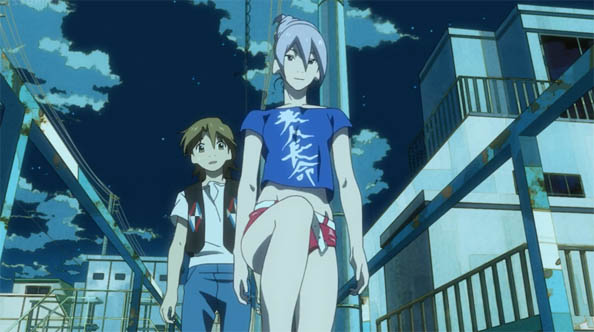 The Gist: Benten returns and crushes Tenmaya, who is both obsessed with and terrified of her. Yasaburou and his mother Tousen visit Tousen’s mother, an ancient white fluffy tanuki, and ask for help turning frog-brother back to normal. The grandmother is blind, kind, and cryptic, but offers some medicine.

Later, Yasaburou and his little brother visit Nadaime’s new location, which is a lovely roof top mansion, and share some afternoon tea. Benten shows up and completely fails to dominate Nadaime. Major magical conflict can not be far off now…

As is often the case, Uchouten Kazoku wandered us through several lovely, dialogue-heavy scenes that straddle the line between inconsequential and deeply magical. However, because Uchouten Kazoku treats its magical settings and characters as everyday occurrences, exposition is kept to a minimum.

What is grandmother’s place in tanuki culture? What are the other tanuki doing around grandmother? Is it a ceremony simply because she is old or is she part of the shrine or something else? Leaving us with a heavily detailed but unknowable scene renders it dreamlike. Captivating. 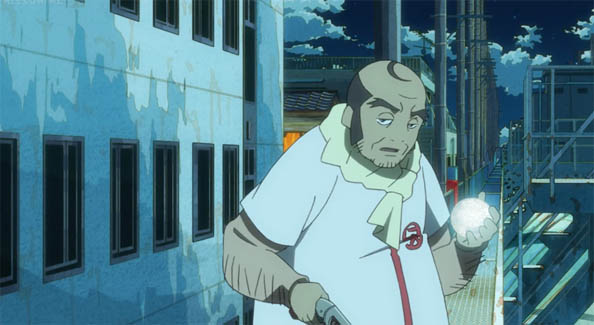 The rise and fall of Benten is more or less the defining arc this week. As with Nadaime, she abruptly falls from the sky full of power and crushes Tenmaya. While we learn no details about their rivalry, and Benten is almost as interested in Yasaburou’s moon (stolen by Tenmaya) as she is in Tenmaya himself.

Here Benten is full of power and flaunts it. Yasaburou has no course but to ask very nicely for his moon back and Tenmaya has no choice but to shed his fake skin and flee. Benten casually rolls the moon around her fingers and, when she tires of it, simply throws it back into the sky before demanding even more courtesy from Yasaburou and wandering off to visit her master.

That domination comes to a quick end when Benten arrives at Nadaime’s new house and arrogantly lays down on the couch Nadaime had planned to use for his afternoon nap. Always polite, Nadaime asks her to leave and when she will not, he spreads a sheet on the floor and dumps her out. Paying her no mind, he thanks everyone for their visit and gets ready to nap.

The contrast between Nadaime and Benten is rather interesting. Both are powerful and throw their weight around but it is hard to figure out which is ‘good’ or not. Despite her malice and abuse, Benten seems to care for Yasaburou. (At least she cares enough to want his attention) Where as Nadaime, despite being generally polite in dialog, is obviously dismissive of Tenuki in general. He’s tolerant of them, but does not especially desire to have them around. 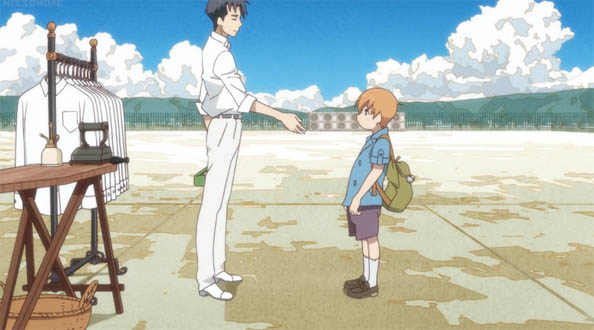 The Verdict: Despite the masterful craft poured into Uchouten Kazoku, it is not always an exciting nor engaging show to watch. Again, as last week, episode three was full of action, characters and conflict, but it lacked a sense of purpose. Nadaime’s shirt ironing, Yasaburou’s grandmother, and Benten playing with the moon were all interesting curiosities but, not counting Nadaime and Benten’s cliffhanger showdown, nothing consequential actually happened.