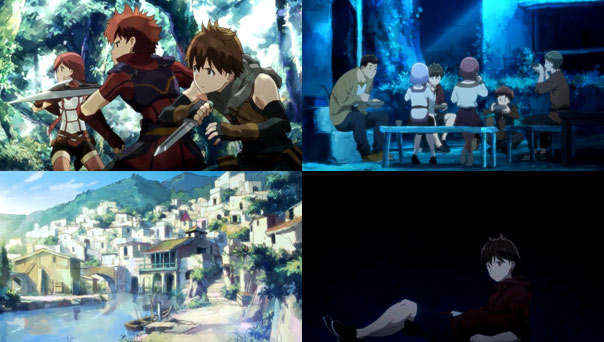 This is a tale of six young people who suddenly find themselves in an RPG fantasy world with no other memories other than their own names. It’s a gorgeous, painterly RPG fantasy world, by the way, rougher in texture but just as lush as Norn9’s setting.

The show quickly separates itself from both SAO and OverLord by maintaining the mystery of what exactly the world of Grimgar is and how everyone got there. It could be an elaborate game or a world as real as the one everyone presumably came from, judging from their normal clothes at the outset. 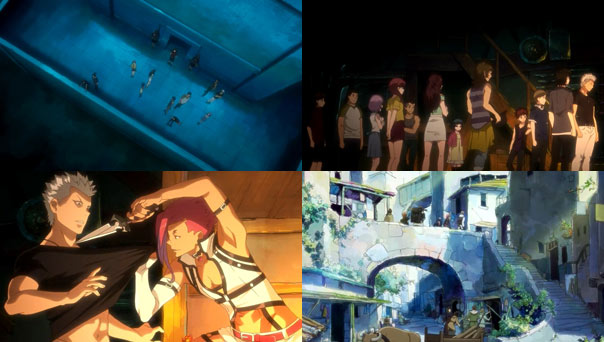 There were actually twelve “new entrants” to this world in the beginning, as protagonist (and our guide to what’s going on) Haruhiro harkens back to a couple days ago. Once they learned the rules—join the Volunteer Soldier Squad for Ortana’s Borderland Brigade, and basically root out baddies for cash—the strongest of them, Renji, took the next-five strongest and went their own way, leaving the six least-strongest.

But while the focus is on the “misfit” party, the show doesn’t cartoonishly overplay their incompetence as anything that wouldn’t be natural for any group of kids in their situation. They’re not that good, but they’ve only been at it a few days; they just need to get their bearings. 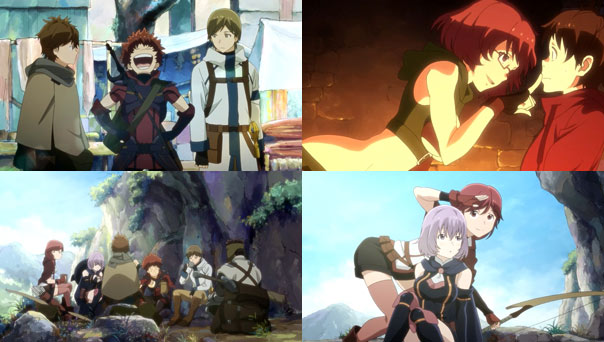 The party consists of Haruhiro, who has chosen the role of thief; Ranta, a dark knight who, appropriately, goes on the most rants and is a bit of a self-involved jerk; Yume, an athletic hunter; Moguzo, a big brawny warrior with a gentle, polite personality; Shihoru, a warm but shy mage with a negative body image; and the priest/white mage Manato, who seems the oldest and most mature of the six and their de facto leader.

While it’s a party of clashing personalities (with much of the clashing being done by Ranta) the show is also very delicate and understated (again, aside from Ranta) in how it portrays the little interpersonal conflicts they have. Their mutual amnesia, shared plight and need to work together to maximize resource income, serves as an equalizer. 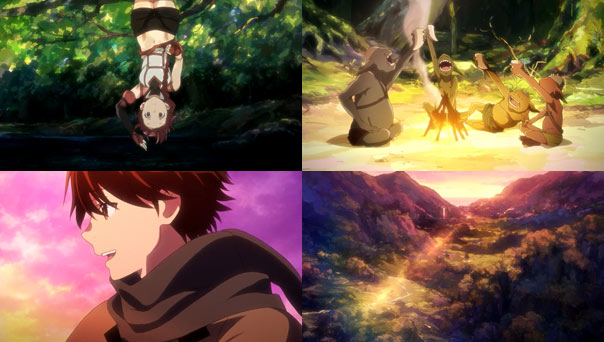 Despite each character’s well-worn archetype, the character interaction is this show’s quieter secret weapon, as is its overall restraint. Nobody is too good too fast at what they’re supposed to do, but nor do things get too dangerous too fast. The goblins that are supposedly the weakest enemies to hunt aren’t hunting them.

No one is utterly overwhelmed by the weight of their situation. Everyone tries to keep a cool head and make the best of a very odd but unavoidable situation. The show also uses music and silence effectively. It’s definitely a less-is-more treatment to this kind of show (aside, perhaps from ample fanservice), which serves it well in terms of gently guiding its viewers into its milieu. I’m in, and I like what I see!