This week’s HGG starts out gently and quietly, with Manato and Shihoru returning from a dawn errand. Shihoru stops to feed the birds, and invites Shihoru to help. She’s startled by the birds, slips, and falls, but Manato catches her, protecting her from harm.

When she thanks him, he admits how glad he is to be talking with her again. Their interactions speak volumes. Manato is someone Shihoru can relie on to protect her; to catch her if she falls. Little did I know that this would be the last time they’d be alone together.

Back in the ruined city, Haruhiro reports how each one of the party has gained a new skill, which when combined with their improving teamwork that covers one anothers’ weaknesses, results in a goblin-slaying bonanza; they can now take on three at a time, and are no longer squeamish about finishing off their quarry.

There’s a triumphant tone to this sequence, with our party kicking ass, taking names, and looking good doing it, all to some very upbeat, energetic battle music. The gang is finally getting the hang of it.

When they settle in for lunch and some rest and relaxation, Yume goes off on a very long tangent about the deity she prays to and offers part of her food in order to keep her safe. The rambling irks Ranta, who wanted her story to have a point, but this is another example of simply passing the time, shooting the breeze, and gradually learning a little more about each other – and themselves; they are still amnesiacs – every day.

The casual joy of the scene is not lost on Manato, who proceeds to praise every other member of the party for their contributions, and how he’s happy they’re become a respectable party due to filling in each other’s gaps. He doesn’t get to talk about Haruhiro, as the party has to move on, but Haruhiro is sure he’ll have any number of chances to ask Manato what he thinks of him. Only, as it happens, he won’t.

Haru sees a glint from the top of a building, and manages to save Manato from a sniper, taking the arrow in his shoulder. Soon, he gets another in his leg, and all hell breaks loose. Goblins of various sizes and skill sets come out of the stonework and ambush the party, who have to beat a speedy retreat to the forest.

As he runs, Manato, the party’s healer, vanguard, and glue, gets an arrow to the back, which pierces his vitals. He attempts to heal himself, but has lost too much blood, and passes out. Neither stopping the blood nor giving him mouth-to-mouth has any effect.

His stunned, desperate party members take him to the priests to see what they can do, but there’s nothing they can do. No phoenix down; no Life spells; no respawning. In Grimgar, dead is dead, and that’s what Manato is. Worse, if his remains aren’t properly cared for within three to five days, he may rise as a zombie. Utterly dejected, you can taste the venom in Haru’s mouth as he asks whether the cremation costs money, then categorically rejects the priest’s charity.

What follows is an excruciatingly long and hard few scenes where Haru, Yume, Shihoru, Moguzo and Ranta simply sit or stand around, defeated, filled with grief, as they say goodbye to their friend and the one who bound them all together and never doubted them. In addition to huge holes in their hearts, they now have a gaping hole in their party with no more healer, a stinging irony.

Their first goblin kill was one of the first times we felt along with the party the full weight and stakes and cruel unyielding harshness of the world they now found themselves in without explanation. But Manato’s death was another first, and one that will be far tougher to recover from. There is no rage or talk about revenge in the end; only heartache and anguish.

In the first three weeks of Grimgar of Fantasy and Ash, we had no shortage of fantasy wrapped in a unique and refreshing realism, with all the horrors and joys of real life. Now, we’ve seen the ash, how far the realism goes, and a major death getting the weight and solemnity it deserves. Now all we can do is wait with nervous apprehension to learn how the party will carry on.

I was initially intrigued by this week’s change of setting and mansion murder mystery theme, but Kyouma and Mira end up caught up in a frustratingly convoluted web of plot that features a little bit of everything presented with a “more is more” philosophy that turns out muddled and unfocused. It doesn’t help that this episode was mostly setup for a part-two payoff next week.

You have a mysteriously drowned horror author, a mansion full of random people who would normally be the suspects, you have Albert tagging along on this one, being all buddy-buddy with Kyouma while bringing up their shared Dark Past. There’s even a gothic lolita collector who doesn’t really do much.

Then you have Mira (who Kyouma seems to have nicknamed Ponkotsu, or “piece of junk”) seeing “ghost” that could really be people involve in the past disaster that claimed many lives 21 years ago, being layered onto the real world due to the use of a Number delving into Dimension W.

While ostensibly a soft sci-fi anime, one can feel the strain of combining so many different genres. Mira’s ability to build the world of the author’s book she can perceive in three dimensions in order to find clues is a neat idea, but somewhat overshadowed by the fact she’s either naked or in a little towel at the time; the camera’s fetishization of her body continues apace, and she ends up in a pretty standard horror movie chase.

There also seems to be a recurring trend of Kyouma leaving Mira off on her own with mixed results; it worked out when she found the robotic pigeons, but last week she was almost exposed (which would have likely meant Kyouma, Mary, and Koorogi’s deaths), and this week she becomes a chained damsel in distress. At some point you hope Kyouma will keep better tabs on his partner.

As for the trio of suspicious characters from the lobby when Mira and Kyouma first arrive – they are operating under the assumption the present owner of the hotel’s dreams are connecting one world to the other, so they kidnap her, perhaps in hopes of retrieving the Numbered coil for themselves (or their client). So throw heist and a competing collectors themes into the mix! This DimW threw a lot of pasta at the wall, but not a lot of it stuck. Maybe the resolution will be more satisfying than the setup… 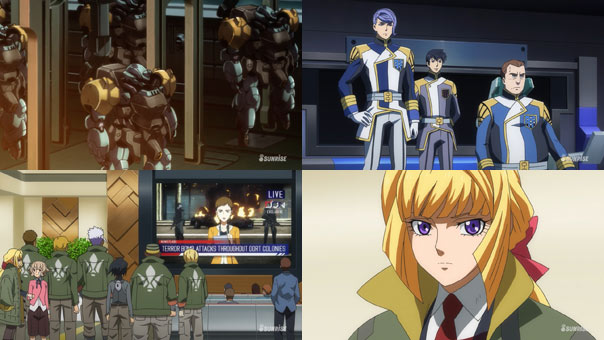 As news of the failed uprising on Dort 3 spreads, other Dort colonies’ workers mobilize for war, just as the “Regulatory Bureau” intended. Those workers soon discover their weapons have been rendered useless and the main Arianrhod fleet lies in wait just beyond the colonies to mop up. All Tekkadan can do is watch it all on TV in the space port.

That is, until Kudelia makes a bold decision that changes the course of every iron-blooded orphan under her employ, as well as her own. She can’t retreat and continue on to Earth after witnessing all this. She’s done running; she’s going to become the hope these downtrodden people need. And she’s issuing new orders for Tekkadan to assist her.

It’s been a long time coming, but now that Kudelia fully understands what’s going on, she is compelled to act. 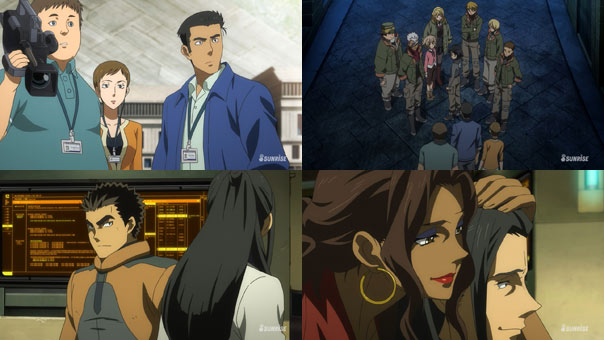 In a stroke of luck, the crack Dort news team that has been covering the uprising and subsequent bombings is ordered to cease their reporting by the Reg Bureau, determining the reports are not conducive to maintaining public peace and calm.

The news team isn’t particularly okay with that, so when they spot some “workers” sneaking around, suddenly Kudelia and Tekkadan have exactly what they need: a means off the colony, and a means to get her voice out there, to both the workers and masters everywhere.

Orga informs Naze of the change of orders, and while the Turbines can get involved, they give Tekkadan their blessing, and Akihito sorties in his recently-finished Gundam. The Isaribi sends Barbatos out for Mika, who EVAs out alone to meet it.

Naze seems frustrated that he’s so “soft” on Tekkadan, but also that he can’t join such an interesting and noble battle. Mika remarks how amazing Kudelia is, and he’s frustrated too – perhaps he feels he hasn’t done enough yet (even though, let’s face it, he’s done plenty to be called amazing himself). 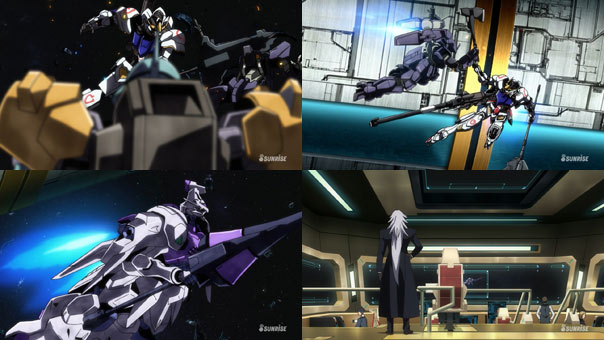 Mika stops some of the helpless workers from getting massacred, but is soon challenged by Gaelio and Ein, the former piloting his shiny family heirloom, Gundam Kimaris, which McGillis recognizes, observing the battle from the bridge of his own ship.

Like Barbatos and Gusion, Kimaris has no beam weapons, and is armed with a good old-fashioned spear with which to crunch into his foes. Kimaris is very fast, sometimes overwhelmingly so, but it’s not a game-changer; the combat here remains wonderfully primitive and visceral. 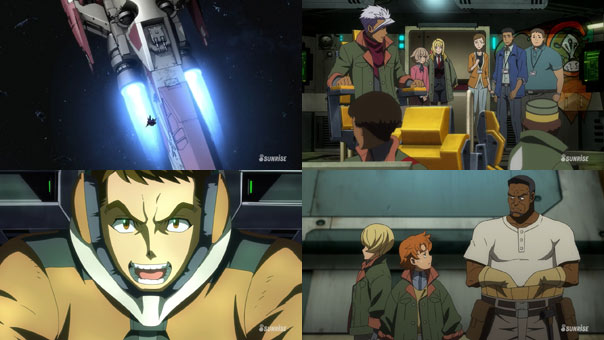 When Gaelio and Ein notice Mika’s true intent – to shield the news launch – I felt a quick pang of Flay-end-itis, but the Isaribi meets the launch and the crew make it back safe and sound. Akihito and Shino join Mika in battling Gaelio, Ein, and the other Gjallarhorn forces, with Shino re-naming Crank’s Graze “Ryusei-go”, which raises the eyebrows of the mechanics in a funny little aside.

Mika comes close to taking out Gaelio, but Ein shields him with his own suit, getting damaged in the process. With the main fleet closing in, Gaelio and Ein retreat as their “further intervention will become a problem.” As all this is going on outside, Kudelia Aina Bernstein, Maiden of the Revolution, dons her own armor – her stately red dress.

After contacting Nobliss Gordon (a move that intrigues him greatly), she begins to broadcast using the news team’s camera and feed signal, to tell everyone out there what’s really going on in the Dort Colonies. If she’s to have any credibility on Earth or Mars, she must own the fact that she was here when everything started to boil over, and shed a light on what’s going on.

With her decision to take up the mantle of authority bestowed to her by the powers that be and actually run with it, Kudelia may have just proven to Nobliss she has the potential to becomes something more than a pawn in a plot, and thus is worth more to his goals alive, even if it’s just to continue to be surprised and entertained by what he observes.