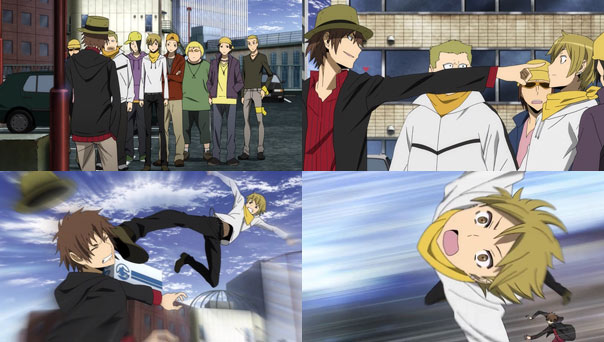 Chikage’s confrontation with Masaomi and the Yellow Scarves looked like bad news, but he’s only there on behalf of himself, and wants to use them to smoke out the “purge” Dollars who hit Kodata. But because this is a meeting of gang leaders who don’t mind the occasional rumble, it comes to fisticuffs, and we see Masaomi in actual action for the first time in a long while.

I assumed he had some skill to be the leader of a color gang (even one as wishy-washy as the scarves), but I didn’t expect him to hold his own so well against Chikage (though he isn’t able to do any damage, he’s able to dodge his attacks well enough). Still, the “blood is thicker than water” title/theme applies here, as Chikage is loyal to Kodata through the bond they forged in righteous, honorable combat.

The Saika family reunion continues, with Anri stating her reservations about manipulating people she holds dear with Saika as Haruna does. It comes down to them having different values. Kasane lays it out thusly: one can either entirely enslave their Saika or allow their Saika to entirely enslave them. Anri is trying to be nice to “both sides”, which Kasane believes is untenable.

Of course, she’s driven by the desire to acquire Saika from Anri, which would mean extracting her, but that can only happen if Anri truly doesn’t want Saika anymore. Anri still feels she owes Saika for saving her from her father, among other things. But Kasane remarks that Anri is too hard on herself for believing herself a parasite, or somehow not or less than human.

Letting go of Saika could perhaps mean returning to “normal” humanity in a biological sense, but she’ll always be one of the “family” by virture of her flesh, her blood, and her past. It’s a fascinating discussion between three very different personalities. Erika lightens the mood effectively both by inviting Kasane to a cosplay event and announcing Dotachin has come out of a coma and can see visitors tomorrow. 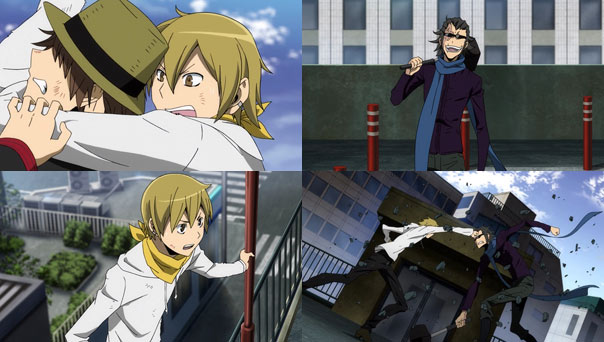 Masaomi and Chikage’s duel continues, with Chikage ending up falling off the building when Masaomi bails out. Just then, Izumii Ran shows up with a gang of men and his mallet, looking to continue his revenge tour.

His taunts easily provoke Masaomi into attacking him, but a fierce punch to Izumii’s head only results in Masaomi breaking his hand. Will Chikage, who was just fighting Masaomi, get back up to that roof and help him stay alive against another superior opponent? 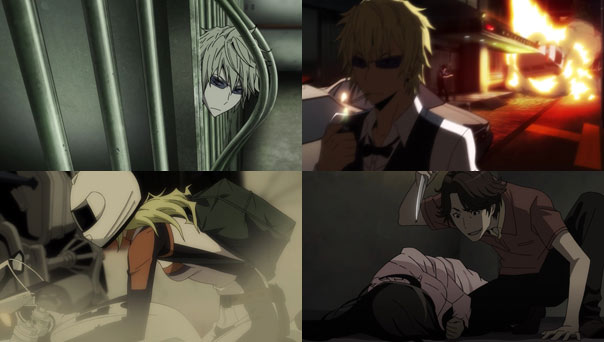 Like Dotachin, Shizuo has been mostly an inert element this cour, as he’s in jail after a woman pressed charges against him for assault. An obvious Saika plant in the cell neighboring him wants him to tear up the joint so they can make off with the head in the commotion, in exchange for the charges against him being dropped.

However, this Saika plant seems to be too late with his proposal, as Shizuo is released without having to do anything after the woman drops the charges. No sooner is he free to go than some kind of rocket or missile hits the police van carrying Celty’s head. Varona of all people makes off with it, staring down Shizuo momentarily before zooming off on her bike. Shizuo assumes this is more of that wretched Izaya’s handiwork.

Prior to this to-do, around dusk, presumably after Haruna left Kasane and Anri, she is kidnapped by a Saika slave and brought to her former boyfriend Takashi, who has plans for her, none of them good. 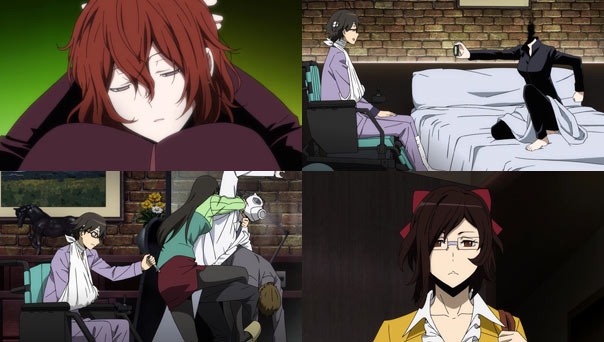 All the news of Celty’s head being out there, exposed to the world, causes her nightmares. She wakes up to find an understanding and supportive Shinra, who has spent the day trying to deal with the Yagiri siblings under control (mostly through sedation).

When Emilia says a girl with glasses is at the door, Shinra assumes it’s Anri, but it’s not; it’s Kasane, who is apparently not done wheeling and dealing. In fact, I wouldn’t be surprised if she was the one who hired/compelled Varona to snatch Celty’s head. 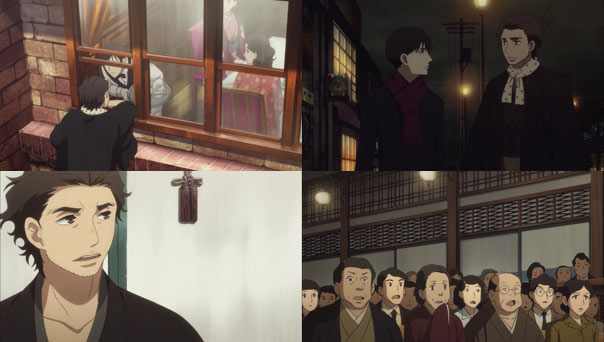 This week we stop in on Bon and Shin as they’ve moved out of the master’s house and into their own apartment together. Shin has a job serving women he charms without trying and pinches every penny, while Bon spends all his non-rakugo time drinking away his earnings.

Shin continues to struggle to find his own rakugo, while Shin oozes confidence on the stage and has every crowd before him eating out of his hand immediately, including Bon. He’s even given himself a new name: Sukeroku. These two continue to be completely different in every way, yet they remain friends. 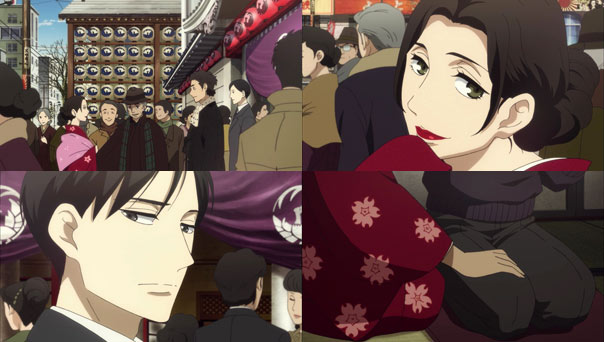 It’s also this week that one of the few things that could strain their long-standing and deep friendship/brotherhood is formally introduced – by their master, no less. I speak of the lovely Miyokichi, whom the master has taken as a side-project, getting her a job as a geisha, likely in exchange for, ahem…other favors.

Miyokichi takes an instant liking to the serene, doll-like Bon, and isn’t subtle about her desire to meet with him alone, using a dance lesson as an excuse. Even in a show chock full of marvelous voice acting, Hayashibara Megumi (who voiced both Ayanami Rei and Faye Valentine) stands out; every line from those red lips oozes sex appeal.

I’d say Bon was immune to her charms, either due to having lost his first love many years ago, or due to being so preoccupied with how he’s going to continue to do rakugo whilst his roommate rubs his apparently effortless yet immense success in his face every day. But he isn’t immune. Few would be.

He returns to Miyokichi’s (a rare subject that shuts Shin – sorry, Sukeroku, up), where he gives her a dance lesson, plays the shamisen while she sings (beautifully), and share some sake. Bon becomes more and more desirable as the evening progresses, as Bon’s not the typical kind of man she deals with, which must be refreshing.

Miyokichi, like his rakugo, is something Bon is still trying figure out. But if Sukeroku’s reaction to his interest in her is any indication, this is probably going to lead to some conflict between the brothers.