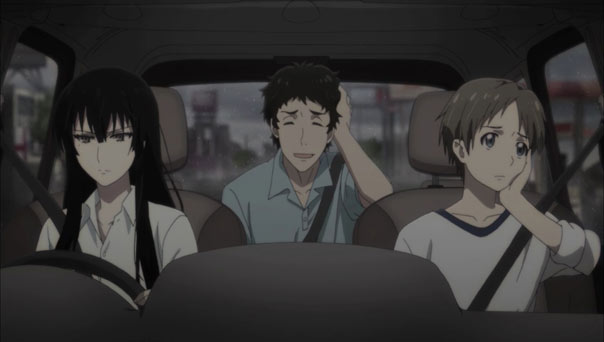 This week’s mystery is provided by Officer Utsumi, whose friend Fujioka believes he’s under a curse that will soon claim his life. Sakurako grudgingly agrees to meet with this Fujioka, if only to tell him he’s full of it. After all, despite many of his male family members dying relatively young and suddenly, a big part of the logic Saku operates under states that correlation is not causation. Humans sometimes make connections where none exist.

This is an interesting variation of the cases Saku has worked on so far; the “victim” as it were, remains alive, albeit convinced his days are numbered. Fujioka comes from an otherwise financially lucky family, and lives in a giant modern black box of a house with gunslits for windows with his wife and infant daughter.

And that’s why Utsumi wants some sense talked into his friend: Fujioka can’t live in constant fear of dying; he has a family to look after; everything to live for. Yet gray clouds suffuse the setting 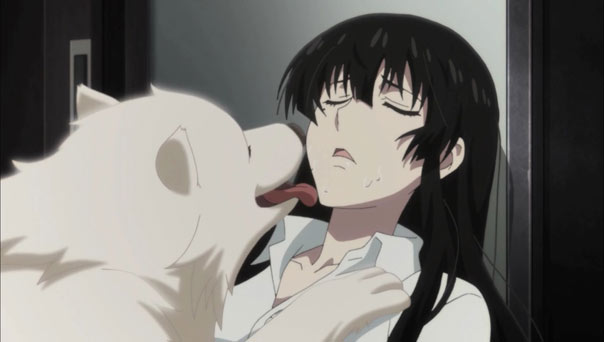 There’s also a dog involved; a white dog we’e seen in the OP, whose owners have one after another come to untimely ends. Hector, as the dog is called, warms up instantly to Saku, no doubt attracted by her regular proximity to death. Saku and Hector have at least one thing in common: they both love bones.

Much of the episode is Saku and Shou sitting in Fujioka’s living room hearing about his life and his various possessions (including one strange painting on display and another believed to be as cursed as the dog in storage).

As his thirty-sixth birthday is nigh, he steps out to pick up his cake, but we see him converse with a man about carrying out some kind of “plan”, causing me to suspect he’s being manipulated, perhaps by someone after his family fortune.

Throughout their interactions with this young family that should be perfect and happy, we see the deleterious effects of the “curse”, whether it’s an actual thing or not. Considering how logical and practical this show has been thus far, I’m loath to believe anything supernatural is afoot. But there is a sense Fujioka is fixating on his supposed curse out of a desire to escape the “prison” of his life, which may not have turned out the way he thought it would.

That assertion is supported by the fact Saku seems to have figured something out, and if it were something not explainable by science, she wouldn’t look so pleased. Unfortunately, time of this leisurely-moving episode runs out before she can elaborate. Until next week…